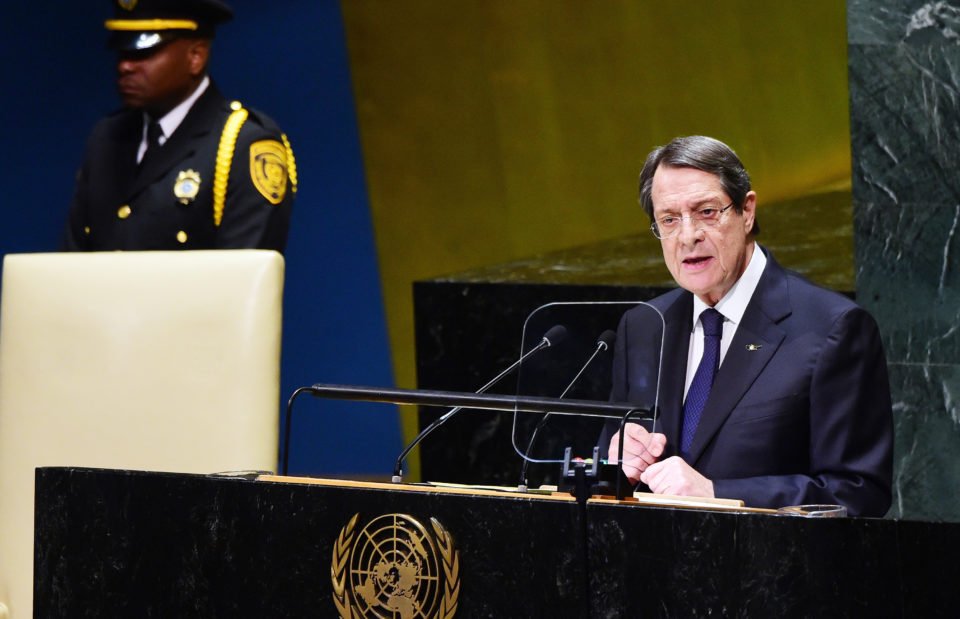 Anastasiades speaking at the UN in New York

Despite ongoing efforts to finalise the terms of reference for restarting the talks, President Nicos Anastasiades said on Wednesday that the two leaders had already reached an agreement on August 9, after which the Turkish Cypriot leader then changed tack.

Speaking after a cabinet meeting at the Presidential Palace, Anastasiades was asked to comment on statements by Mustafa Akinci that the president is engaging in a blame game. Anastasiades responded that until now he had never blamed Akinci for a series of setbacks, in an effort to maintain good and friendly relations with him.

Anastasiades added that during his meeting with UN Secretary-General Antonio Guterres in New York last week, he made clear his “intention, resoluteness and irrevocable political will” to work for a Cyprus settlement, as he did in Crans-Montana.

The solution, he went on, should be acceptable to both communities in Cyprus and should above all be functioning and viable, with the creation of a state that is free from dependencies and guarantors.
Asked about the terms of reference and if UN envoy Jane Holl Lute is expected to return to Cyprus, Anastasiades replied that the terms had been agreed with the Turkish Cypriot leader on August 9.

“They were confirmed during the first day after Lute’s arrival, who was informed about the convergencies achieved and who prepared a short statement at our request,” he added.

“Now, if some back down, if some ask for the inclusion of predetermined positions, I am very sorry, but I cannot follow.”

Turkish Cypriot leader Mustafa Akinci, however, said later in the day that this was not true and the only thing they agreed on August 9 was that the procedure ought to be results-oriented and not an open-ended one.

He also wondered why Lute stayed in Cyprus for a week in September if there was an agreement on August 9.

The day Anastasiades will accept the Guterres Framework of June 30, 2017 and commit to the convergences concerning effective participation of the Turkish Cypriots in decision making, will be the day there will be an agreement on the terms of reference, he said.

In September, in comments referring to the failed attempt by UN envoy Jane Holl Lute earlier in the month to secure an agreement between the two leaders on the terms of reference, Akinci stressed that the reason behind the failure was that Anastasiades “continued his negative stance on the issue of effective participation” of Turkish Cypriots in decision-making processes.

“The Turkish Cypriot people are no one’s minority,” Akinci stressed. “If a partnership is going to be established, it is important to decide together in the fields of competence of the partnership… Only in this manner is it possible to conclude the terms of reference.”

Why the Greek flags?