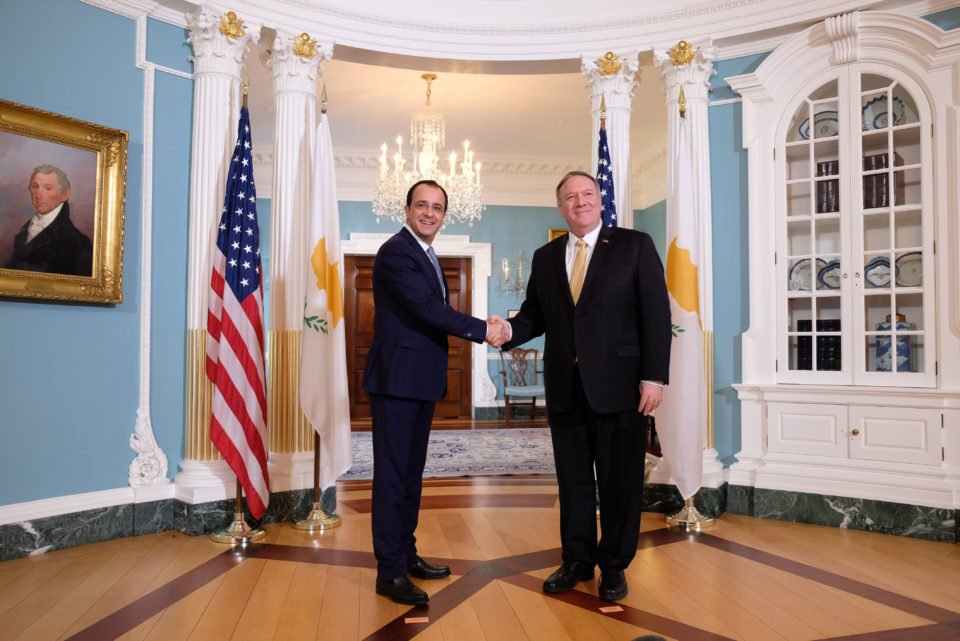 US and Cyprus are to start discussions on abolishing visas for Cypriots visiting the US on holiday and conclude an agreement to avoid double taxation, it was reported on Monday.

Following a meeting between Foreign Minister Nikos Christodoulides and US secretary of State in Washington Mike Pompeo, a source told the Cyprus News Agency that the two top diplomats discussed the next steps in bilateral relations in the context of the Statement of Intent the two countries signed a year ago.

Discussions also concerned an agreement on information security and other programmes that will bypass the current arms embargo until it is lifted in Congress.

Discussions will start on abolishing visas for Cypriots visiting the US for holidays and concluding an agreement to avoid double taxation, the sources told CNA.

According to an official statement the two ministers had the opportunity to review the full range of Cyprus-US relations and discussed concrete ways to further strengthen cooperation.

On the occasion of one year since the signing of the Statement of Intent between the two countries aimed at enhancing bilateral cooperation in the wider security sector, Christodoulides and Pompeo welcomed the progress achieved so far in joint actions in areas such as maritime security, combating terrorism and trafficking of illicit substances and cooperation in humanitarian operations.

They also discussed the latest developments in the Cyprus issue, with an emphasis on the ongoing effort to relaunch substantive negotiations that will lead to a bizonal bicommunal federation. Christodoulides expressed hope that Ankara would demonstrate the necessary constructive stance.

The two ministers also exchanged views on the escalating illegal Turkish activities within the maritime zones of the Republic of Cyprus.

Diplomatic sources told CNA that Pompeo conveyed the message that the United States are not contemplating any other solution other than a bizonal federation and lent his support to the Republic of Cyprus on the issue of rising tensions caused by Turkey.

Christodoulides also briefed Pompeo on the progress achieved in promoting the tripartite cooperation mechanisms that Cyprus has jointly established with Greece with states in the region aimed at tackling challenges and strengthen regional cooperation.