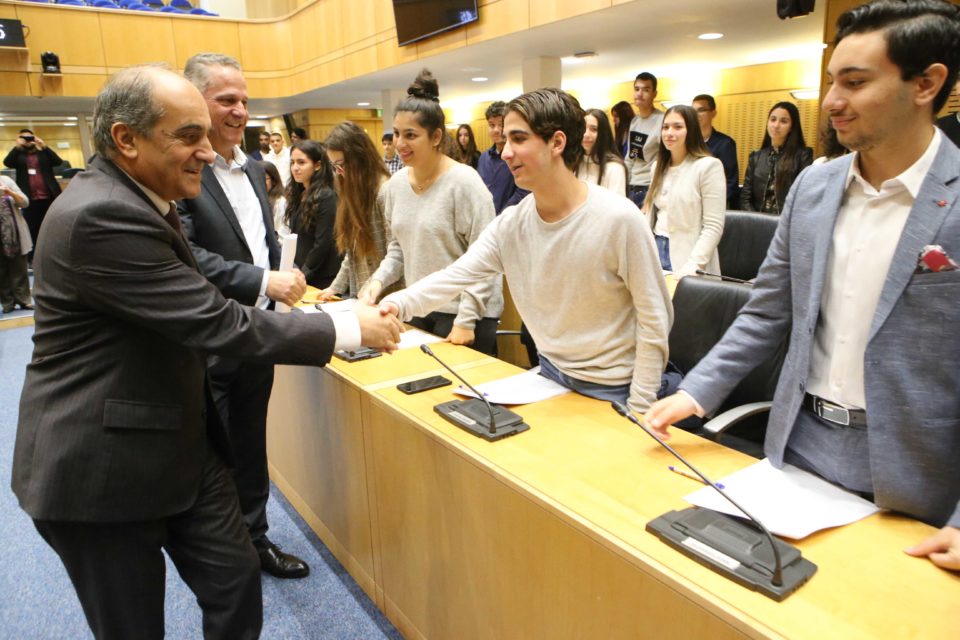 House president Demetris Syllouris at the Children's Parliament on Wednesday

Child commissioner has said that only patience and persistence can ensure that no child in Cyprus is excluded from enjoying their basic human rights.

“We must continue with patience and persistence to work for the creation of a culture which respects children’s rights,” said Despo Michaelidou, speaking at an event on Wednesday to mark the international day for the protection of children which is marked on November 20.

“We need to assign a common goal that every child living in Cyprus must enjoy their basic human rights, without any discrimination and without exclusions.”

She said that the UN Convention of the Rights of the Child should be taken into account when forming a national policy.

“Children are deeply concerned about worldwide issues which affects them, including violence, terrorism, conflicts, climate change, unfair management of refugees and migrants and poverty.”

Despite progress, Michaelidou said, one in 12 children worldwide lives in countries where their prospects are worse than that of their parents. “There are 180,000,000 children in 37 countries who experience severe poverty, they are out of school or they lose their lives due to armed or violent conflicts.”

Referring to the UN convention she said it was not enough that it is accepted worldwide.

“We must move on to action. The convention exists to be implemented and its philosophy must be promoted, its guidelines must be taken into account when a national policy is formed.”

A special Children’s Parliament with a special theme of poverty was also held at the House of Representatives to mark the day on Wednesday.

House president Demetris Syllouris told student attendees that children should be informed and involved in issues which concern them.

“Children should have the opportunity to express their opinion on social matters,” he said.

In its own comments to mark the day, the Green Party said that although the convention calls for children’s rights in housing, clothing and food, the state is failing to provide children with disabilities those vital material goods leaving their parents to struggle on their own to provide for their family.

The party also commented on school bullying, saying they had repeatedly asked authorities to hire sociologists and psychologists to cover all the private and state schools’ needs to deal with such cases.

The Universal Children’s Day was established in 1954 by the United Nations and is celebrated annually on November 20 to promote the wellbeing of children internationally.