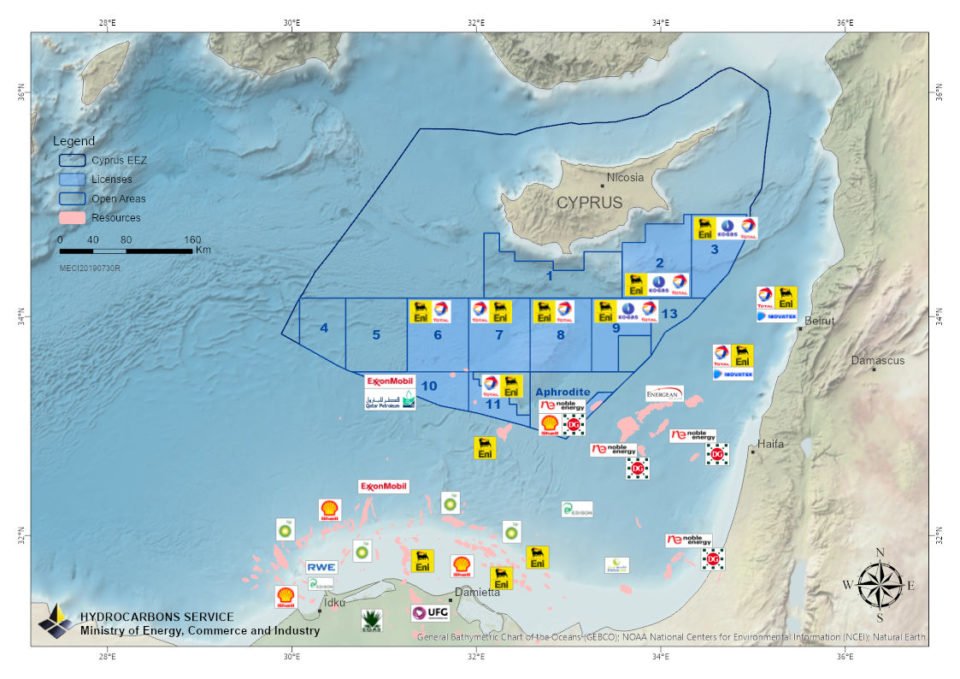 The outcome of talks between Cyprus and Israel over a dispute regarding the offshore border with Israel’s Yishai gas field will not affect development of the island’s Aphrodite gas field, Energy Minister Giorgos Lakkotrypis said on Monday.

“First, development of the Aphrodite reserve is going on as planned, and second, as regards the special agreement with Israel, there is a set procedure that is being followed for some time and will continue to be followed,” the minister said.

“But the most important thing I want to stress is that these two things, that is, the development of Aphrodite and the procedure for a special agreement, are not linked as far as the Cypriot side is concerned.”

The Cypriot government last month granted the three companies that own the Aphrodite concession, the first hydrocarbon exploitation licence with a view to piping gas to Egypt and export it in the form of LNG. The licence, granted to the Noble Energy, Shell, and Delek consortium is for 25 years.

Israel’s embassy in Nicosia confirmed the report, saying it reflected the country’s position on the matter. It added that the government of Israel was prepared to continue the negotiations with Cyprus to come to an arrangement on the issue.

“Such an arrangement will maximise the prospects of the two fields and benefit the two countries and their economies, contributing to stability and economic growth in the eastern part of the Mediterranean,” an embassy announcement said.

Lakkotrypis said Cyprus would have preferred to have the agreement in place but stressed that it was not a condition for Aphrodite’s development to go ahead.

Of the embassy announcement, the minister said that was the position of the Israeli side but not one shared by Cyprus.

“Our position is crystal clear and it is as follows; either with or without an agreement, if it is proven that natural gas from Israel’s side is pumped by our side, the Republic of Cyprus will of course compensate the Israeli side accordingly,” Lakkotrypis said.

In his letter, Adiri points out that the Aphrodite-Yishai field is a cross-border natural gas reservoir, and as such Israel and Cyprus have held several years of negotiations for the purpose of reaching a bilateral agreement regarding its exploitation.

One of the options raised for consideration was the possibility of initiating direct negotiations between the licensees of both countries, subject to approval by the two states, he reportedly said.

“However, up to this point, the two states have not concluded the necessary agreement that would facilitate the fair exploitation and development of the field, for the benefit of all the involved parties,” he said according to Globes.

Adiri told the three company executives that Israel’s position is that the development and exploitation of the Aphrodite-Yishai field by the licensees of both states must not commence prior to reaching an agreement between the government of Israel and Cyprus.

The letter, according to Globes, was sent last month following comments by Israeli businessman Beny Steinmetz, who holds a stake in the Yishai licence, that the Israeli government was not doing enough to protect the rights of the licence. Steinmetz and his partners claim that the gas in the Yishai licence could be worth as much as NIS 3 billion (€780.5m)

Cyprus’ Energy Minister Giorgos Lakkotrypis said last month after the agreement with the consortium was signed that talks were ongoing with Tel Aviv, but that their outcome would not affect the reserve’s development.

Get on board with cord