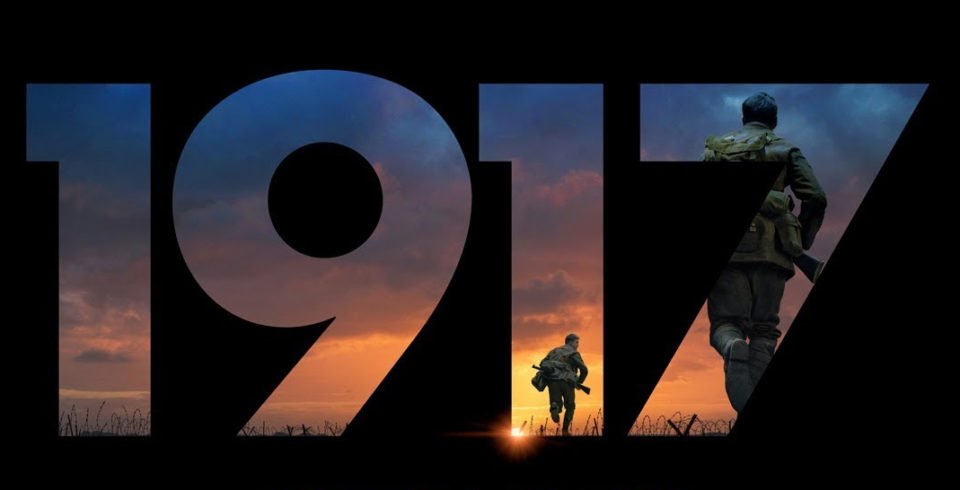 Come on lad, says the sergeant to a daydreaming soldier: “Pick a man. Bring your kit” – and we’re off, just like that, our setting being World War I (hence the title), our heroes being Lance Corporals Blake (Dean-Charles Chapman) and Schofield (George MacKay) who have just a few hours to cut across enemy lines (it’s okay, they’re assured; the Germans have gone) and deliver a message that’ll save the lives of 1600 men, including Blake’s brother. It’s a simple, slightly paradoxical plot, gunning for tension yet also episodic and picaresque, bolstered by the WWI Experience (the mud, the rats, the trenches) as seen most recently in the Peter Jackson documentary They Shall Not Grow Old – though 1917 (winner of Best Drama at last week’s Golden Globes) also reminded me of The Revenant, another very physical, spectacular, high-degree-of-difficulty movie that won loads of awards.

The high degree of difficulty here stems from the way in which director Sam Mendes (who also co-wrote, inspired by the war stories told by his granddad) chooses to shoot the film – in long unbroken takes with a handful of invisible cuts, so it looks like one extended shot. In terms of logistics, 1917 is a stunning achievement. Following the action for minutes on end is hard enough – Roger Deakins’ camera swerves and dodges elegantly, now alongside the soldiers, now pulling back – but at one point, for instance, a plane engages two other planes in a dogfight and gets shot down, crashing into our heroes (an actual plane! crashing into our heroes!), and of course it had to appear in the sky at precisely the right moment, and come down at precisely the right angle. Then there’s the bit where a character dies onscreen, seemingly in one shot – but in fact he grows deathly-pale as the blood leaves his body so you know there had to be a cut, to apply makeup, it’s just so well-done that the cut isn’t visible. Mind-boggling stuff.

1917 is awe-inspiring. It’s also mediocre – and the one-shot technique only adds to its problems. Mendes’ rationale for shooting so ambitiously was to make the film more immersive, “to lock the audience into the men’s experiences” as he told Vox.com (it also, of course, makes it more like a video game) – yet it’s far from clear that dispensing with cuts adds to dramatic tension. A cut operates as a shock (albeit not a conscious shock, since we’re so used to them); it changes the emotional parameters, e.g. by showing one character’s reaction to another’s action; a cut says ‘This, but also that’. Lose the cuts and a film tends to feel unmoored, almost dreamlike – as for instance in the German film Victoria from a few years ago, where the one shot expressed the woozy feel of a crazy night out, or the films of Chinese director Bi Gan where the uninterrupted shots are coded as dreams. Mendes’ style tends to flatten the story, losing the secret connections created by editing.

Then again, that’s a matter of taste. Some may indeed find the one-shot style very tense, and I guess I can see why (a cut is also an escape; lose the cuts and it feels claustrophobic). The real trouble is that Mendes – like Alejandro Gonzalez Inarritu, who made The Revenant – is a brash, maximalist filmmaker; he goes big, and usually obvious. Even the subtle bits end up feeling unsubtle here; when a character channels his grief by frantically pushing a truck stuck in the mud (a nice psychological detail, at least in theory), it’s blindingly obvious that ‘Yes, this physical exertion is helping him to process his pain’. When a soldier wanders through a village in ruins, music swells up to make it extra-clear that he’s gazing at the Terrible Beauty of War. 1917 is just too much. Stanley Kubrick ended his own WWI movie Paths of Glory with a lone voice singing, and it felt poignant and powerful; for Mendes, the equivalent scene is just another climax, in between getting swept down a swollen river and venturing out into no man’s land. Add the too-muchness of being all in one shot, and the whole film topples over.

Or does it? Maybe the answer is to view this not as a serious drama, but simply as a Hollywood entertainment. The Germans are evil, Nazis in all but name (in fact, They Shall Not Grow Old showed a more nuanced relationship between Brits and Huns). War is hell, but also exciting. The camaraderie extends, without any hint of condescension, to a Sikh soldier (really? in 1917?). An escape through a collapsing mine shaft inches close to Indiana Jones territory. The plot is set in motion by avuncular commander Colin Firth saying “Your orders are…” (at least he didn’t say ‘Your mission, should you choose to accept it…’). 1917 is misjudged but it works in a shallow way, then again I’m the guy who thinks Mendes’ best film is Skyfall, and his worst the Oscar-winning American Beauty. Your mileage may vary.