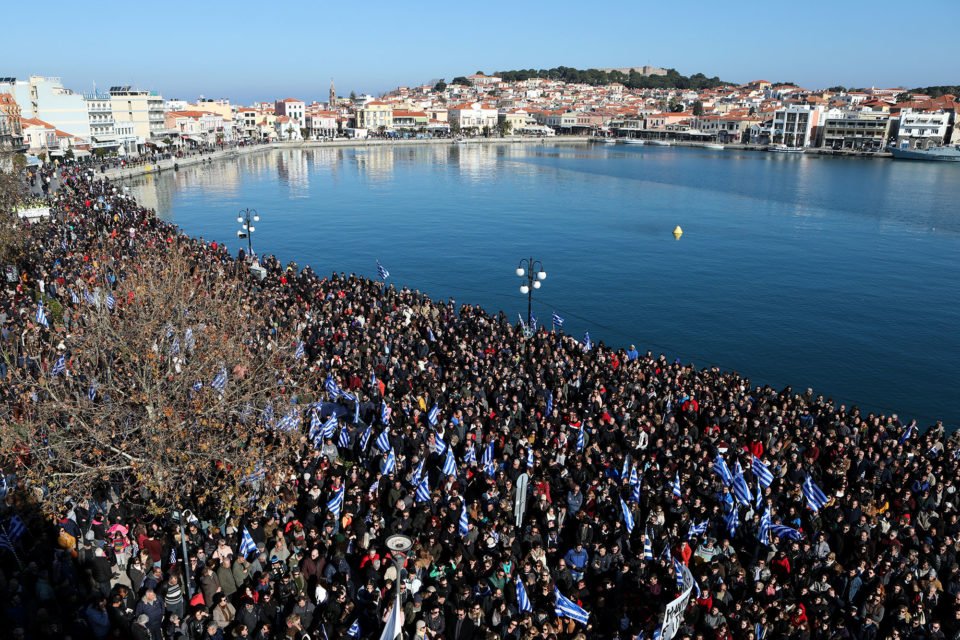 Locals take part in a protest against overcrowded migrants camps on the island of Lesbos, in Mytilene, Greece, January 22, 2020. REUTERS/Elias Marcou

Mayors of three Greek islands bearing the brunt of intensely overcrowded refugee and migrant camps demanded the transfer of thousands to the country’s mainland during a meeting with the new migration minister in Athens on Thursday.

During a second day of protests over the plight of the camps and the conservative government’s plans to replace them with holding centres, the mayors of Lesbos, Samos and Chios pressed for a swift resolution to the problem.

Migration Minister Notis Mitarachi said after the meeting that the concerns were justified as the migrant crisis has placed a heavy burden on island communities.

“Our priorities include the decongestion of islands, the reduction of migrant inflows, their (migrants’) return to Turkey and trust-building measures between the central government and the islands,” Mitarachi told reporters.

On Wednesday island shops remained shut and public services disrupted by a walkout as part of the protest.

Greece, via neighbouring Turkey, was the main gateway into the European Union for more than a million mainly Middle East and Asian migrants fleeing conflict in 2015-16.

Last year, 59,726 migrants and refugees reached Greek shores, according to the U.N. refugee agency UNHCR. Nearly 80% of them arrived on Lesbos, Chios or Samos, which lie in Aegean waters not far from the coast of Turkey.

Athens has repeatedly called for a cohesive policy from its European Union partners to ensure an equitable distribution of challenges posed by arriving refugees and migrants.

Other EU states have been loath to accept significantly more migrants since the 2015-16 crisis. European Commission President Ursula von der Leyen has promised to present a proposal for a revamp of EU migration policies next spring.

Last year the Greek government pledged to shut overcrowded refugee camps on its outlying islands and replace them with more restrictive holding centres, in a marked hardening of its stance towards asylum seekers.

Aid groups have described the living conditions of about 36,000 people in camps operating far beyond their capacity as appalling. The Moria camp on Lesbos, set up to accommodate 3,000 people, hosts at least five times that number.

Medical assistance group Doctors Without Borders (MSF) on Thursday accused the Greek government of “deliberately depriving” at least 140 children with life-threatening diseases in Moria on Lesbos of adequate medical care.

“We see many children suffering diabetes, asthma, heart disease, who are forced to live in tents, in abysmal, unhygienic conditions, with no access to the specialised medical care and medication they need,” said Hilde Vochten, MSF’s medical coordinator in Greece.