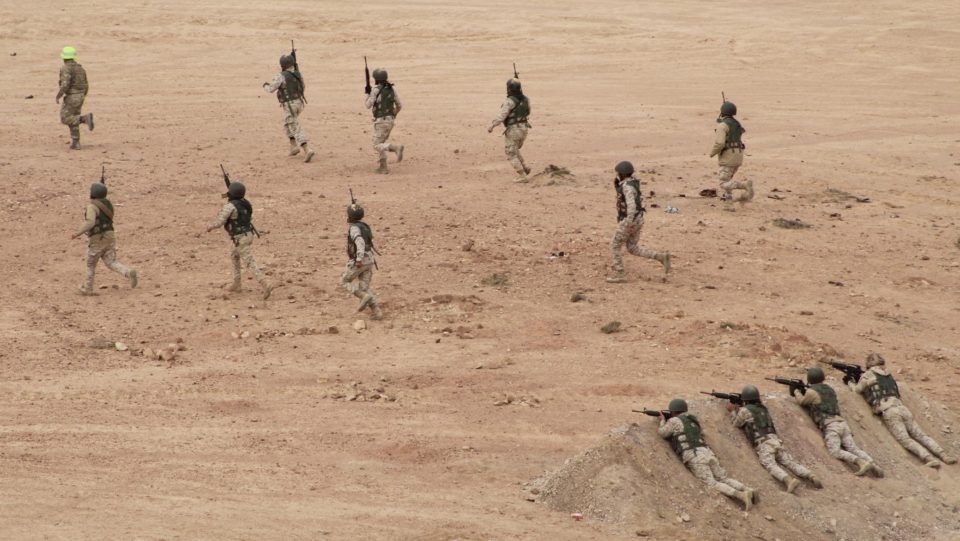 Troops from the 2nd Battalion The Mercian Regiment have been in Jordan over the past few weeks exercising alongside members of the Cyprus National Guard and the Jordanian Armed Forces (JAF).

Exercise Olive Grove, which saw 101 personnel, made up from 2 MERCIAN’s A-Company, the National Guard and various other members of the British military, train alongside JAF soldiers “to develop interoperability and defence relationships”.

Major Mike Brigham, Officer Commanding of A-Company, who was in Jordan overseeing entire the exercise, explained a little more about Olive Grove and his feelings on its overall success.

He said: “We managed to achieve our main goal by constructing a training programme to instruct both the Jordanian and British troops in trench and urban operations and the exercise culminated in a joint live fire distinguished visitor’s day.

“The training was hugely successful and it has received praise not only from the military chain of command but from the other government departments based out in Jordan too.”

Training alongside other nations is not uncommon for British military personnel but that doesn’t mean it is without any challenges but according to Maj Brigham, it was managed with great success.

He continued: “Language, culture and understanding you could say are the three main challenges when exercising alongside other nations. We call them the ‘three pillars’ but they are easily overcome by preparation, acceptance and willing.

“To see how other nations conduct their business is very useful indeed, no matter what nation, if you are receptive to learn, you will take something away that will be of benefit.”

During the exercise, the 2 MERCIAN soldiers also had the opportunity to immerse themselves in Jordanian culture, learn more about the country’s rich history and get involved in a local community project.

“The military training was arduous,” Maj Brigham said. “But the company group also had the chance to conduct cultural activities to Petra, Wadi Rum and the Dead Sea, which was a great opportunity.

“Furthermore, the company helped repair and decorate a community centre for the United Nations High Commissioner for Refugees, that focused on support to the local community and refugees from Syria.

“Finally, the company group conducted a British Embassy training day to share awareness and understanding of what the British Army does overseas.”

Colonel Jeremy Pughe-Morgan, Assistant Chief of Staff for Operations, based in HQ BFC, attended the visitor’s day and he was delighted with what he saw from the 2 MERCIANS.

Taking to social media, he said: “It was a wonderful training opportunity for British Forces Cyprus soldiers working alongside our military partners, the Jordanian Armed Forces and the Cyprus national Guard on a joint exercise.”

No reason to panic about coronavirus, health minister says