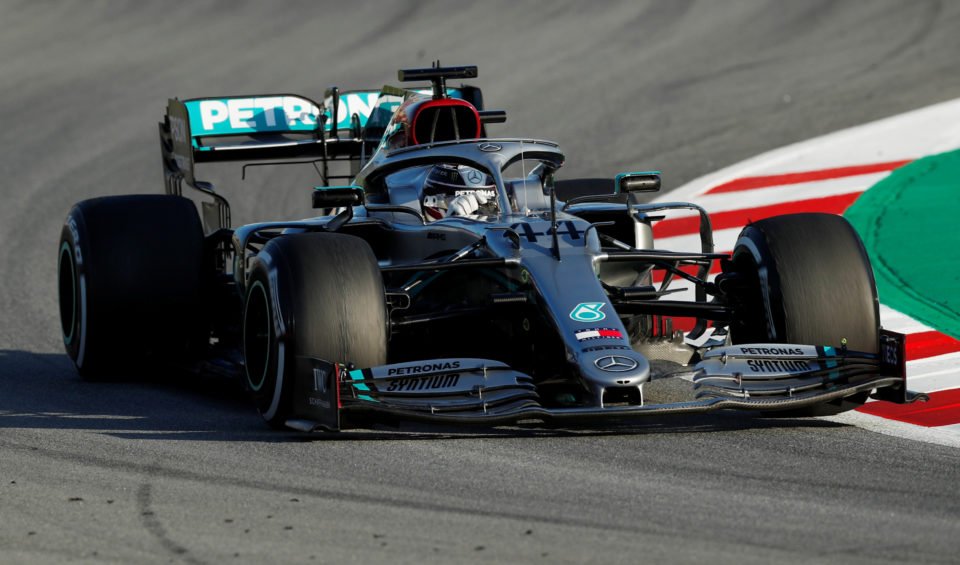 Hamilton did 94 laps of Barcelona’s Circuit de Catalunya on the soft C2 compound in a sunny afternoon session, running untroubled after team mate Valtteri Bottas completed 79 laps in the morning.

The Briton’s fastest time of one minute 16.976 seconds compared to the best of 1:18.161 set by Vettel on the first day of testing last year.

Hamilton, who is hoping to equal Ferrari great Michael Schumacher’s record seven titles this year, was 0.337 of a second quicker than Bottas.

Racing Point’s Mexican Sergio Perez was the best of the rest, with his team’s new car drawing attention for the similarities to last year’s Mercedes.

Leclerc was only 11th fastest but did 132 laps.

Red Bull’s Max Verstappen was fourth and did the most laps, 168, with McLaren’s Carlos Sainz doing 161 on a day without any red flags to halt the action and all 10 teams getting in plenty of mileage.

Four-time champion Vettel had been due to drive Ferrari’s new SF1000 first, with team mate Charles Leclerc having to wait until Thursday, but that plan changed when the German reported sick.

“Seb not feeling great this morning so Charles is taking over driving duties for the day,” said a spokeswoman for the Italian team.

The test was the first opportunity to see all the new cars on track together and Vettel joined the other drivers in a photograph on the pit straight before the session started at 0800GMT. He then left the circuit.

The Ferrari-powered Haas and Alfa Romeo teams had earlier pushed their cars out for a pitlane reveal of their new liveries.

British driver George Russell, in the Williams, was first out in a major improvement from last year when the team were unable to get a car to the track in time and eventually turned up three days late.

“Definitely, the general handling of the car is much better,” the 22-year-old told reporters.

“From lap one today I had confidence to push the car to the limit whereas last year it wasn’t a nice a feeling in the early laps. It was quite scary to drive actually last year in the opening laps and trying to build that confidence.”

Poland’s Robert Kubica, Russell’s departed 2019 team mate, returned to the track as Alfa Romeo’s reserve driver while Frenchman Esteban Ocon, who had a year out last year, was back for Renault.

“We’re going to probably break all the records of lap times I reckon this year.”

The 2021 rules are little changed from last year but one difference was a new decree barring teams from hiding their cars behind screens in the garages, giving fans in the stands a better view.

The season starts in Australia on March 15, with only six days of testing before then

Olympics to begin in July 2021

UEFA president admits that current season may not finish