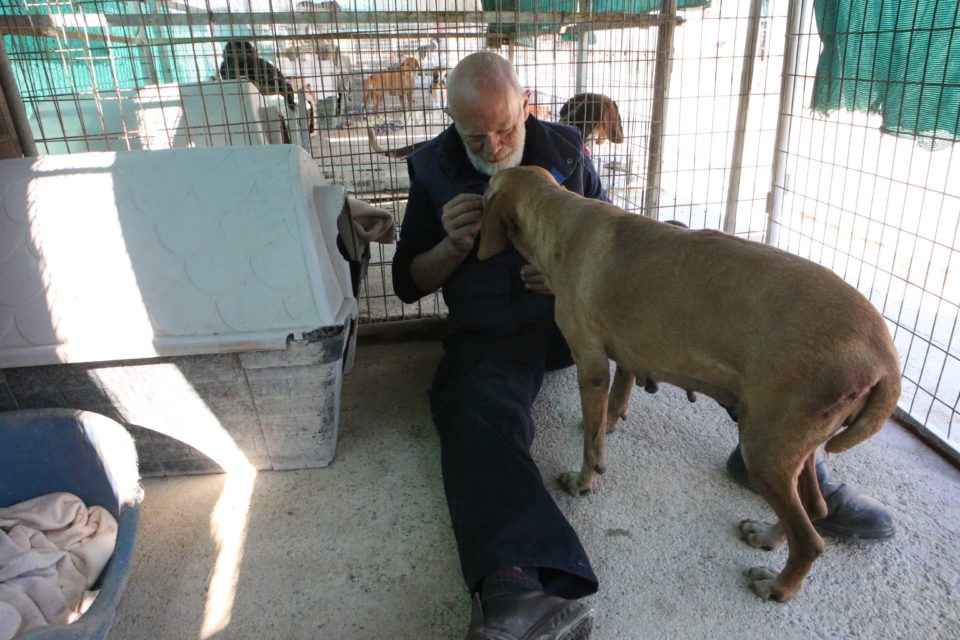 David Reid says he is picking up doggie habits after his first 24 hours locked in a cage at Aradippou animal shelter, where he is planning to stay until Friday to raise awareness about animal welfare.

“I think I am going to start barking,” the 60-year-old dog trainer said on his first day locked in the cage.

According to Reid’s welcome video on Monday morning, there are dogs who spend most of their lives in a shelter and his aim is to rehome those abandoned animals after helping them overcome their fears.

Roullis, a small mix-breed dog who has been living in the shelter for about ten years has grown quiet and scared of people. The only humans the 12-year-old dog comes in contact with are the shelter’s volunteers who come to clean up the cages and feed the animals.

“In just his first day there, David managed to gain the dog’s trust and Roullis allowed him to pat him,” founder and CEO of Elafi Anna Georghallides told the Cyprus Mail on Tuesday.

The project started at 10am on Monday, and will be ongoing until this Friday. Reid will be spending all of the days locked in a cage apart from the time the volunteers come to clean up.

“After a few hours with the dogs he started picking up on their habits” Georghallides said.

“He is trying to remain concentrated on his work with them, but if he hears a noise or sees someone approaching, he feels as alert and curious as the dogs would be.”

Elafi’s founder said Reid told her: “I think I am going to start barking” after spending his first sleepless night among barking dogs.

Volunteers feed him pre-packaged meals whenever they feed the dogs. Reid has his mobile phone with him in case of emergency but he is only switching it on for about one hour per day to send updates about his feelings to Elafi.

The animal lover is determined to go through the project and is desperate to help the dogs and raise awareness, said Georghallides.

The project was an initiative of David Reid, in partnership with the Elefi animal welfare awards.

“This is a universal project,” said Georghallides. “We want to highlight what animals go through in a cage, it just happens to be in the specific dog shelter in Larnaca.”

But the animal-friendly organisation aims to start discussions on animal welfare in the island as well.

“We want to encourage the government to take it more seriously” she said.