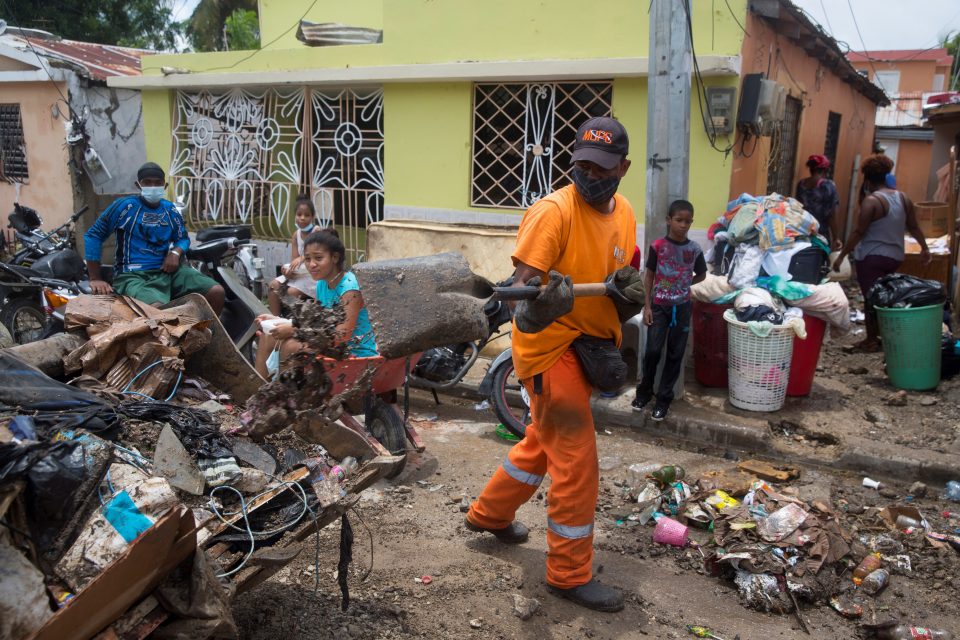 A man collects rubble in an area affected by Hurricane Isaias in Hato Mayor, Dominican Republic

Hurricane Isaias strengthened slightly as it lashed the Bahamas on Saturday, bearing down on Florida and was expected to approach the southeast of the state later in the day before traveling up the eastern U.S. seaboard.

Isaias was carrying top sustained winds of 85 miles per hour (140 km per hour) and was located about 50 miles (80 km) south of the Bahamas capital Nassau at 8 a.m. (1200 GMT) heading northwest, the U.S. National Hurricane Center said.

Its center was approaching Andros Island in the Bahamas and was due to pass over or near islands in the central and northwest Bahamas on Saturday, bringing a danger of damaging storm surges of up to 5 feet (1.52 m) over normal tide levels, the NHC said.

The storm, a Category 1 on the five-step Saffir-Simpson scale, prompted authorities in parts of Florida to close COVID-19 testing sites and people to stock up on essentials.

The state is already grappling with one of the country’s worst outbreaks of the novel coronavirus, reporting hundreds of deaths per day this week.

Isaias was expected to deliver heavy rains to the state’s Atlantic coast beginning late Friday before hitting the eastern Carolinas by early next week, the NHC said.

“Remain vigilant,” DeSantis said at a news conference on Saturday morning, warning that slight variations in the Isaias’ path could make the difference between coastal communities facing hurricane-force winds or something more like a severe thunderstorm.

Scores of hotel rooms along Florida’s east coast have been set aside for any people with COVID-19 who are ordered to evacuate their homes where they have been isolating themselves, the governor said.

The storm has caused at least two deaths in the Dominican Republic and torn down trees, flooded streets and knocked out power for thousands of homes and businesses in Puerto Rico, according to media reports.

Glad to be here: UK tourists land in Cyprus

Britain wants to allow people to travel again but…