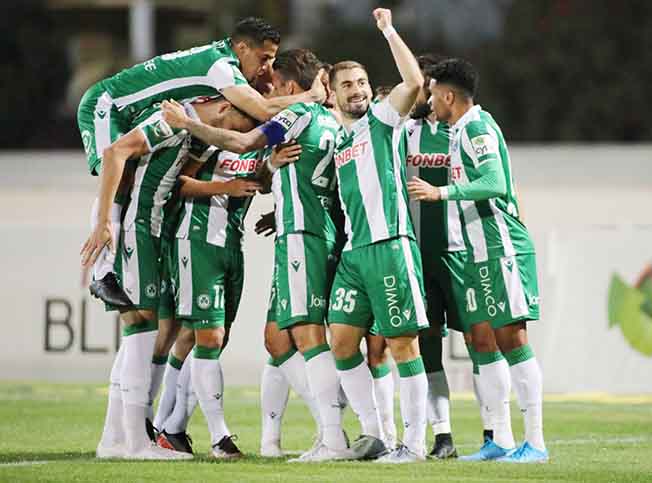 Friday’s start to the Cyprus football championship has been thrown into disarray after the opening game between Ethnikos Achnas and Enosis Neon Paralimniou was called off on Thursday after two Ethnikos players tested positive for Covid-19.

Adding to the chaos, the Cyprus Football Association (CFA) said that Apollon v Doxa and Nea Salamina v AEK may not go ahead this weekend, as the stadiums set to stage the games do not fulfil the criteria set out by the governing body on the island. The CFA is expected to make a final decision on Friday morning

As it stands, Apoel v Karmiotissa, Anorthosis v Ermis, Olympiakos v AEL and Paphos v Omonia will all go ahead as planned.

The new Cyprus football season is shaping up to be one of the most peculiar and tempestuous in living memory, with a myriad of issues adding an uncomfortable degree of complexity and unpredictability into the mix.

Getting underway on Friday, this season’s first division championship will be the first to start amidst the Covid-19 pandemic, with the previous season having been prematurely cancelled on health and safety grounds.

The Cyprus Football Association had cited an impasse between its own proposed safety protocol and the government’s non-negotiable requirements for the cancellation of the season.

Though no champion was declared, the league table at the time of cancellation resulted in Omonia Nicosia qualifying to the Champions League. The Nicosia club have already defeated their first opponent and advanced to the next round.

The ramifications of the coronavirus outbreak and the subsequent cancellation of the previous season have been far-reaching and still generate major challenges for the Cyprus Football Association, the clubs themselves, the players, the match-going public and TV viewers.

The Cyprus Football Association have implemented a wide range of changes in response to the pandemic, although its general reaction to the multifaceted array of issues is ever-developing.

There was the issue with club academies and their temporary suspension. The CFA had issued clarifying instructions to counter pieces of misinformation that were being spread online, claiming that the CFA had sought to suspend academy operations until September.

The CFA has also issued a revised set of rules on player transfers, loan agreements, and player registration for the forthcoming season. This was coupled with changes pertaining to the registration, transfers and loans of foreign players in Cyprus. Further, the association also confirmed that should the next season be suspended due to a force majeure incident, any player’s contract and all clauses within it shall be suspended.

The CFA, after consultation with the Ministry of Health and the government’s epidemiological team, have also issued a revised health and safety protocol for the forthcoming season. This includes an attendance cap which has caused headaches for all clubs, particularly in terms of lost season ticket revenue.

In more practical terms, however, match attendances had been dwindling for years, particularly after the introduction of the much-maligned fan card, and the capacity limitation is unlikely to have the level of impact that some clubs are claiming, although some of the bigger clubs’ complaints possess some legitimacy indeed.

The unification of Cypriot football television rights across all streaming platforms will undoubtedly do little to curtail the fall in match-going fans, although the increased convenience and general value-for-money proposition have generally been welcomed by the public.

The CFA has also implemented drastic changes to the first division’s format for the forthcoming season.

In an attempt to satisfy certain clubs in the top two divisions, the association expanded the division to contain 14 teams, essentially cancelling relegation while maintaining promotion from the second division. The 2020-2021 season will be played in two distinct phases.

The first phase will include the first round of home and away games for each club. At the end of it, the bottom two clubs will be automatically relegated. The remaining 12 will advance to the subsequent postseason phase, where two mini-leagues will take place to determine the champion and the other relegated clubs.

Meanwhile, the player’s union (Pasp), has already expressed serious concerns with player safety over the next season. More recently, Pasp has highlighted the low number of player testing, particularly with certain teams which have not been tested to an adequate extent. This followed the revelation that two Ethnicos Achnas players had tested positive to Covid-19.

Then there’s the issue with match officials over the next season. Several clubs had been requesting the introduction of foreign referees in order to ensure a fairer and higher standard of officiating in Cyprus, while other clubs weren’t keen on the idea.

This has ultimately been scrapped and Cypriot officials will be in charge of refereeing games next season. However, CFA general secretary Fivos Vakis has left the door open, saying that the performance of Cypriot officials may or may not result in the use of foreign referees.

To make things even more intriguing, VAR technology will be implemented midway through the season. The use of VAR is currently scheduled to start in January, with the CFA president saying that the goal is to implement it as soon as possible in the new year.

Meanwhile, FIFA have unveiled a Covid-19 relief plan, aiming to help football associations deal with the issues resulting from the pandemic. This includes a fixed sum to be given to each association, with a second amount being subsequently handed out for the specific goal of safeguarding or investing in women’s football. We will certainly be keeping an eye on this particular clause throughout the season.

In terms of sporting matters and the current state of each club things are naturally quite foggy. There are major questions surrounding the vast majority of squads, with some notable players leaving their respective clubs.

Omonia and Anorthosis have both lost their most reliable goalscorers, with Matt Derbyshire and Ruben Rayos leaving their respective clubs this summer.

There is another connection between the two clubs, with Omonia signing forward Milan Duris, with the player leaving Anorthosis after a two-year stint at the club.

Apoel are having to contend with the ongoing saga of Musa Al-Taamari’s potential exit from the club, but have strengthened with the addition of experienced Israeli striker Ben Sahar.

Apollon Limassol have seen their captain Fotis Papoulis depart the club and sign with Omonia Nicosia on a free. Apollon attempted to sign Greek international Lazaros Christodoulopoulos, but the move collapsed after an offer from the club was reportedly rebuked by the player. Apollon have completed two offensive transfers so far, with Nicolas Diguiny joining from Aris Saloniki and Bagaliy Dabo joining from Neftchi Baku.

Larnaca club AEK made the loan of Apollon midfielder Matija Spoljaric permanent after a transfer fee was agreed with his former club. AEK continued their preference with signing players from Spain with winger Nando Garcia joining from Racing on a free. Garcia is the second winger the club has signed this summer, with Andreas Makris joining from Apoel after being released by the Nicosia club.

It’s hard to make predictions at this point, particularly with the transfer window still open and the potential qualification to the Champions League or Europa League group stage undoubtedly having the potential to alter a squad’s composition on account of the increased revenue it will generate.

However, at this point and with all things considered, I think Omonoia’s relative stability, both in managerial and player terms, will stand them in good stead. There seems to be a general lack of acrimony at the club, with manager Henning Berg expressing satisfaction with his current squad, so it would be surprising if they don’t challenge for the title, especially if they manage to further bolster their attacking options with another addition.

Anorthosis Famagusta, Apoel Nicosia and Apollon Limassol are somewhat of a conundrum, especially in a coronavirus-era season.

Perennial champions Apoel can never and should never be discounted, and with familiar manager, Ouzounidis at the helm should be expected to challenge for the title along with Omonia.

Anorthosis need further strengthening up front, with their transfers so far focusing on defensive and midfield positions. Former Salamina winger Charles Eloundou is sure to spice things up at the front, although he may need to work on his final ball and decision making if he is to satisfy the rigorous demands of manager Temur Ketsbaia.

Apollon have lost a number of first-team and squad players, some to free transfers and others due to their loan ending. Their two major incoming transfers are the two forwards mentioned above. While they retain some key players from the previous season, it will be interesting to see how they manoeuvre the transfer market in the coming days.

In the lower places of the prospective league table things will be quite intriguing indeed, especially with the staggered relegation process mentioned above.

Enosis Neon Paralimniou, Olympiakos Nicosia, Karmiotissa Polemidion, Ethnikos Achnas, Ermis Aradippou, Doxa Katokopoias and Pafos FC will duke it out for the privilege of staying up.

If I had to venture a guess, I would say that Karmiotissa, Ethnikos and Enosis are more than likely to risk automatic relegation upon the completion of the first phase of the season.

The first round of games had originally been scheduled as such: