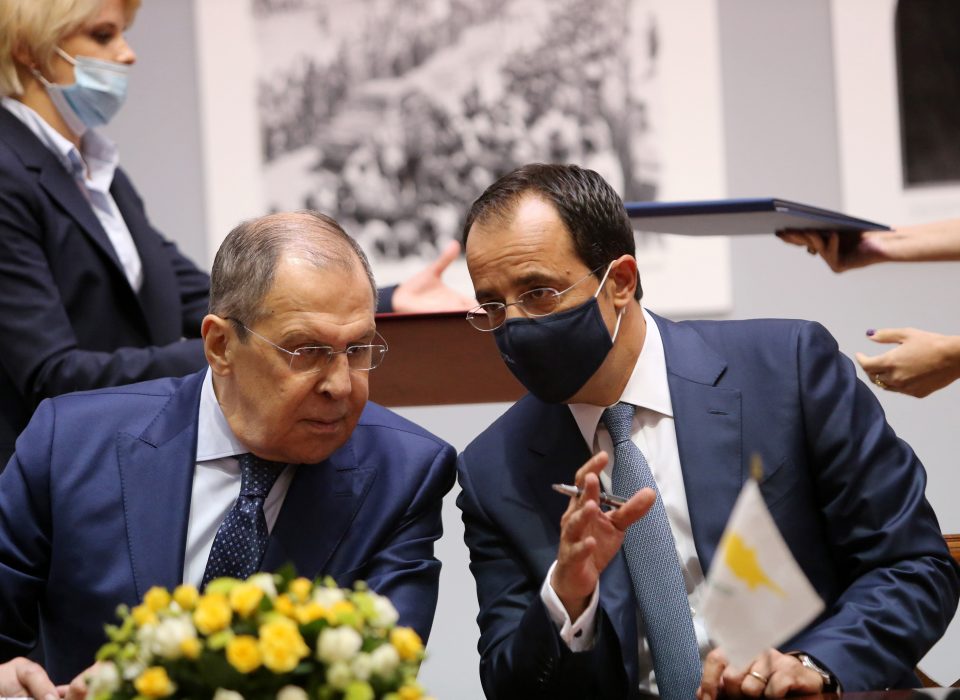 NEVER before have the foreign ministers of Russia and the United States visited Cyprus within four days of each other, even though Secretary of State Mike Pompeo’s arrival was arranged at the last minute.

On Tuesday, Cyprus played host to Russia’s foreign minister Sergey Lavrov, a visit that had been announced a month earlier and coincided with the signing of an amended double taxation treaty and the marking of 60 years since the establishment of diplomatic relations between the two countries.

Pompeo stopped over on Saturday for three hours, on the way back from Qatar where he attended the opening ceremony of Afghanistan peace negotiations. A planned visit to Cyprus in January was cancelled, and Saturday’s three-hour stopover was arranged at the last minute, being announced on Friday morning.

No information about the visit was posted on the State Department’s website or that of the US embassy in Nicosia. The Cyprus government, which was informed about Pompeo’s arrival on Thursday night in a telephone conversation between acting assistant Secretary of State Phillip Reeker and foreign minister Nicos Christodoulides, has avoided saying much about the visit. All that was said was that Pompeo would meet President Anastasiades at the presidential palace at 7.30pm and that Christodoulides would be present.

On his way to Qatar, Pompeo told accompanying journalists that his visit was “also related with things happening today in the eastern Mediterranean” and he would be seeking a solution to the escalating tensions in the region, noting that disputes over the seas “must be resolved in a diplomatic and peaceful way.”

The visits of the two foreign ministers were preceded by an exchange of accusations between their countries’ respective ambassadors, sparked by news conference given by the US ambassador Judith Garber to announce the partial lifting of the arms embargo against Cyprus.

During the news conference, Garber accused Russia of playing a destabilising role in the region, drawing a response from the Russian ambassador, Stanislav Osadchiy, who accused Washington of wanting to damage relations between Moscow and Nicosia.

One of the US conditions for the waiving of the restrictions on the sale of non-lethal defence articles, was the denial of access to Russian military vessel to Cyprus ports for servicing and refuelling. “Those who say the strengthening of (Cyprus’) cooperation with the US in the region is not directed against anyone obviously underestimate the real aims of Washington,” said Osadchiy, in a dig at the Cyprus government.

Lavrov also raised the issue on Tuesday, after his meeting with Anastasiades, accusing the US of “trying to play the countries in the region against each other and to pursue the course of ‘who is not with us, is against us’, forcing everybody else to follow this course.”

Was there a US plan to limit Russian influence in Cyprus? Was this the aim of the improvement of relations between Cyprus and the US, which, apart from the partial lifting of the arms embargo also envisages the provision of International Military Education and Training next year?

“The US had always taken an interest in Cyprus, although this may have been motivated by the way Greece-Turkey relations were affecting Nato by the Cyprus problem,” said political analyst James Ker-Lindsay. “What we are seeing today is not new interest, but a different form of interest, as the energy equation has turned the politics of the region upside down.”

There had been a major shifting of alliances in the region, said Ker-Lindsay. “In the eighties and nineties, Turkey enjoyed very close relations with Israel, carrying out joint military exercises, but all this has finished now, and Israel is cooperating with Cyprus and Greece on energy.” The US had backed the energy alliance of Israel, Greece and Cyprus, which Turkey claims was aimed at keeping it out of the eastern Mediterranean.

“It was included in a bill sponsored by a Democrat and a Republican senator,” he said, referring to the Menendez-Rubio law. The law, approved by the US Senate last December, thanks to Democrat-Republican cooperation, was also directed at Cyprus-Russia relations. Not only did it stipulate denial of access to Russian ships to Cyprus ports it also demanded the submission of reports “on malign activities by Russia and other countries in the region.”

This has put the Anastasiades government in a bit of a fix. Although Cyprus had actively pursued closer ties with the US, since Anastasiades’ re-election, it had not considered that this could adversely affect its cosy relations with Russia, which are championed by all the political parties of the island, on the dubious grounds that Moscow had always taken a principled stand on the Cyprus problem.

Lavrov said nothing about the access to Russian military vessels but his comments on Tuesday were indicative of Moscow’s displeasure with the US overtures to Cyprus. It was left to Cyprus’ foreign minister Nicos Christodoulides, to settle the issue of access. Speaking on state radio on Wednesday morning he said that “Cyprus’ relations with the US were not raised by Mr Lavrov.”

He also gave assurances that the government did not intend to change its policy towards Moscow. It would carry on providing facilities to Russian vessels for humanitarian reasons, which was a clear case of fudging the issue. The Menendez-Rubio law referred to the servicing and refueling of military vessels which might not qualify as humanitarian reasons.

Had too much been read into the foreign ministers’ visits and the ambassadors’ spat? Not according to Phileleftheros which on Saturday reported that Washington “wants to make a comeback in the eastern Mediterranean a send that message that the US is present in the region, a message directed at Russia and China.”