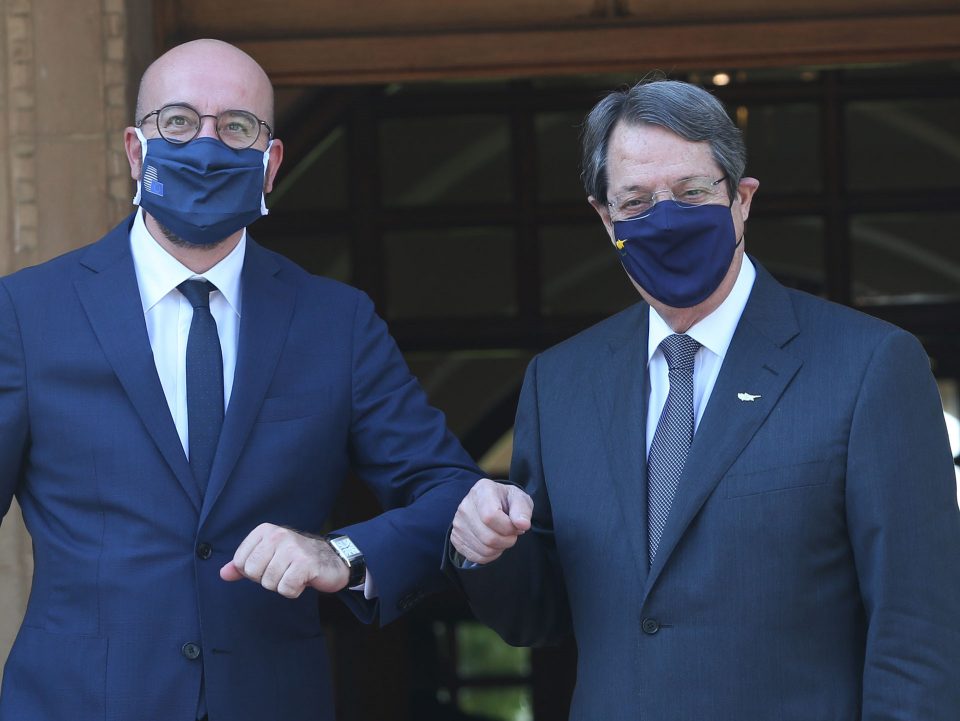 Solidarity must be expressed not only through words but also actions, European Council President Charles Michel said on Wednesday after a meeting in Nicosia with President Nicos Anastasiades.

The EU official is in Cyprus ahead of the EU leaders’ summit next week focusing on Turkey’s activities in the eastern Mediterranean. Michel was in Athens on Tuesday for talks with Greek Prime Minister Kyriakos Mitsotakis.

Following his meeting with the Cypriot president, Michel said the EU has been monitoring the “worrisome developments” in the eastern Mediterranean during the past month and would like to send the message that this is not an issue concerning just Greece and Cyprus but also EU rights. Toward that end, he said, it was decided that the European Council will discuss “at the highest EU level to conduct a strategic dialogue on our future actions for this part of the Mediterranean, including Turkey” on September 24 and 25 in Brussels.

“I believe that we really need to be absolute in terms of respecting the rights of all EU states and of course the interests and rights of Cyprus,” Michel said. He added that these interests are based on EU principles.

He stressed that only through dialogue can progress be made on de-escalation and achieving common goals for respecting international law. That means more security and more stability as a priority to be shared by all in the field of strategy, he said, which is why he wanted to have these consultations prior to the EU leaders’ summit “to see how, in the long run, we can act together at European level.”

Michel stressed that solidarity “is not just through words, but through actions, which must be done in an intelligent way in order to achieve the best results.”

Anastasiades reiterated that the European Council president’s visit comes at a crucial period amidst Turkish provocations in the eastern Mediterranean.

He also said that respect for the sovereignty of all EU member states should remain the rule no one can ignore, referring to the renewal of the Navtex by Turkey for the extension of the illegal operations of its Yavuz drill ship in waters off Cyprus until October 14.

Nicosia, he said, is always ready for dialogue on the basis of international legitimacy, without blackmail or threats.

“Your presence is active proof of the EU’s presence in developments in the region,” Anastasiades told Michel.

He said that during the meeting, he briefed Michel on the latest developments in Ankara’s illegal actions off and in Cyprus and Nicosia’s initiative to de-escalate tensions.

Discussion was on the recent collective decisions at EU level, and on Michel’s contacts in Turkey and EU leaders ahead of next week’s European Council.

“We agreed that the EU needs to establish stabile conditions in the region,” Anastasiades said. “Ahead of next week’s European Council, we stressed the importance of remaining united on the messages sent and determined in the implementation of our decisions, as long as the (Turkish) illegality continues.”

Nicosia and Athens would like to see more sanctions against Turkey over its drilling and exploratory activities in the two countries’ waters, but unanimity is needed by all member states.

She added that Turkey is and will always be an important neighbour but that this in tandem with the fact that it is hosting millions of refugees, “with considerable (EU) funding” was no justification “for attempts to intimidate its neighbours.”

Anastasiades also referred to the migration issue, which he said in Cyprus’ case, the unprecedented increase in migratory flows was mainly orchestrated by Turkey which aimed at the change of the country’s demographic. Anastasiades said Turkey had done the same in the occupied areas.

“At the same time, the EU, in my view, is being blackmailed by Turkey through ‘instrumentalised’ flows of refugees and migrants, while the situation in the EU is deteriorating due to Turkey’s refusal to cooperate and meet its European obligations to the Republic of Cyprus, including the (EU) Readmission Agreement,” Anastasiades said.

Michel said the EU will propose in a few days a “new pact on immigration”, pointing out there will have to be a political dialogue between the member states to be more effective and to support all countries, including the EU states in the forefront.