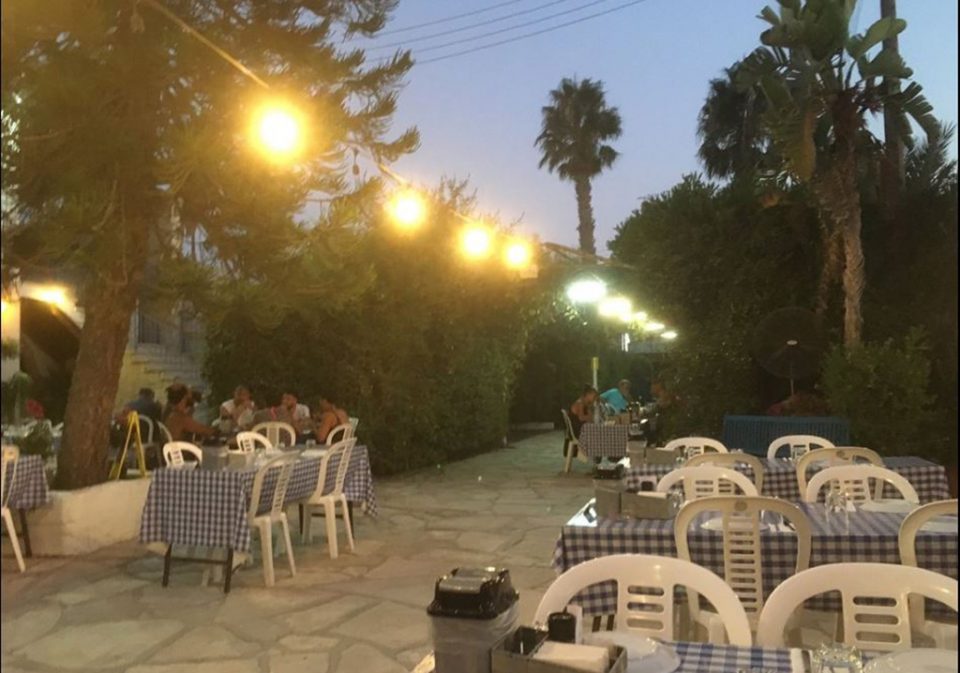 While going to various different restaurants to sample cuisine from around the world is great, I do love a good Cyprus meze. There are many tavernas in town and along the seafront but those that offer the best and most traditional meze are generally those tucked away in a village.

I had been told about Alonia taverna in Livadia, which has become a more modern area of late with bistros and cafes opening. But walking up to the restaurant, I was very impressed – a quaint, old village style house with a beautiful, plush courtyard that is big enough to host at least 150-200 people! Tucked away in one of the corners were two traditional clay ovens.

The socially distanced tables were laid with blue and white chequered tablecloths and the seating was nothing fancy – white plastic chairs. However, you don’t go to a village taverna expecting posh chairs! The interior was decorated with old style memorabilia such as woven baskets, a long wooden bread mould and even a radio that looked like it was from the 70s!

When we sat a waiter came over and asked if we wanted to hear the menu but we already knew what we wanted and ordered the meze alongside a couple of large, cold Keo beers.

It didn’t take long for the beers to arrive; ice cold, exactly as they should be. They were quickly followed by the colourful, fresh salad with a door stop size slab of feta cheese balancing on the top, accompanied by a basket of warm bread. Warning: do not fill yourself up on the bread! 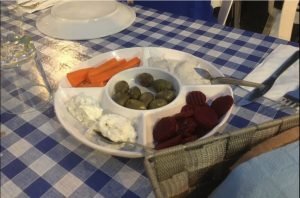 As expected, the first dish was a circular platter with dips, carrot sticks, beetroot and tsakistes olives in the centre. The food started coming out thick and fast. Most of it was served in small terracotta dishes. I wouldn’t be able to recall all of the dishes that were brought out but some were definitely very memorable. Something as simple as baked aubergine topped with cheese was superb. The thick slice of halloumi was slightly firm on the outside and warm and soft on the inside. The egg and courgettes were fluffy and probably one of the best I have ever had. The keftedes were a good size and not oily at all. Beware, they must have come straight out of the pan because they were steaming hot! Even the traditional pasta topped with halloumi and mint was great.

As you can see, there are plenty of dishes suitable for vegetarians. Other vegetarian dishes such as grilled mushrooms and pourgouri (bulgar wheat cooked in tomato sauce). Meanwhile, the table was filling up fast and the blue chequered tablecloth had disappeared beneath a sea of food!

Finally, what I had been waiting for arrived. Souvlakia, alongside a serving of sieftalies. I was especially pleased as sieftalies are one of my favourites and my partner doesn’t eat them. Guess who gets the one left over?! They were superb. Seasoned perfectly, soft and impeccably cooked. Although there was the odd fatty piece, the souvlakia were also extremely tasty. Just as we thought we were done, another dish came. Juicy pork ribs. Despite being full, these looked too good to turn down and were a great finish to the meze.

Just as we felt we were able to breathe after eating all that food, the waiter brought us a plate of watermelon and deep fried filo pastry filled with nuts and topped with honey!

One small criticism would be that the food came out a little too quickly. It was so fast we had to remind ourselves it was not necessary to keep up. Next time, (and there will be a next time) I would definitely ask them to slow down a little.

The setting, friendly staff and fantastic food made this a very enjoyable night out. Well done Alonia!

How I make ceramics at home