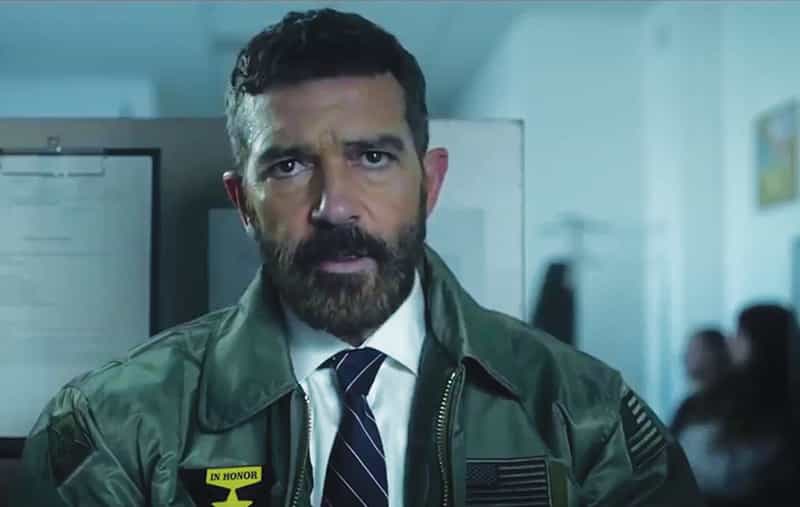 We inch around the window of a parked car to reveal Antonio Banderas, bushy-bearded and visibly sighing to himself. He’s Eddie Deacon, a returning war veteran desperately looking for a job. “Anything you don’t like doing?” asks the girl behind the desk at the job office. “I like it all,” shrugs Eddie. Even cleaning toilets? she asks with a smirk. Eddie looks at her, weighed down with the numbed embitterment of the unappreciated war hero and/or slumming movie star: “I’ll do anything”.

‘Anything’, for Eddie, includes a low-paying job working night-time security – and ‘anything’, for Banderas himself, includes Security, a bottom-of-the-barrel action thriller whose all-Bulgarian lineup of names in the closing credits reveals its cut-price origins. It’s a shame because Banderas is a missed opportunity, a natural comic who never really got to play comedy (doing the voice of Puss in Boots doesn’t count), squandering his light touch and innate sense of irony on tongue-in-cheek action like Desperado and Femme Fatale. This, on the other hand, isn’t even tongue-in-cheek – and Eddie himself is a tiresome hero, defending a mall (where’s Paul Blart when you really need him?) against a gang of villains who are after a feisty little girl in Witness Protection.

It takes a while for the B-movie badness to reveal itself. The opening set-piece, a shoot-out on a rain-slicked highway during a storm, is competent enough – but then we meet our protagonists, Eddie’s fellow security guards, and the absence of a smart script or an actors’ director (Alain Desrochers comes from adverts and music videos) is all too apparent. Liam McIntyre is self-consciously manic as Vance, the sideburned, sardonic chief guard, babbling fast and chuckling at random; Chad Lindberg delivers his lines in a strangulated voice with odd intonations – “Am I supPOSED to apOLogise for reading the news?” – as Mason, the resident nerd. These are pretty terrible performances and Banderas seems to know it, taking refuge behind his bushy beard as he stands there with a long-suffering expression, trying to sell himself as a dynamic action hero: “Right now, time is our enemy. Let’s make time our friend!”.

I’m as sympathetic as the next man to this kind of trash, probably more than the next man: there’s something almost glorious – especially with the cognoscenti once again declaring the Death of Cinema – in the fact that no-frills, low-ambition movies like this are still being made in the wilds of Eastern Europe, hoping only for DVD sales plus a few big-screen showings in obscure places (like, yes, Cyprus in August). The recipe is simple enough: one main location (the mall), one ageing star (Banderas), one prestigious character actor and long-ago Oscar winner as the villain. That role goes to Ben Kingsley as Charlie, the leader of the gang – and he’s predictably nefarious, warning his men that “your family, friends and pets” (and pets!) will all be killed if they fail, and at one point twitching madly in close-up after a setback. Twitch. Twitch. “Get it cleaned up!!!” Twitch.

For a while, one can find amusing nuggets in the general shoddiness. Charlie escalates the situation (rather foolishly, since the guards were all set to give him the girl), offering $1.25 million in unmarked bills – and an unsmiling figure in a black cowl turns up, like some ghostly mediaeval monk, to present the briefcase. Mostly, however, Security is severely lacking in inventive detail, and the grinding sameness becomes depressing. Eddie dodges dozens of bullets, even when he’s driving a bike through the mall (actually, it’s more like a buggy) and presents an unmissable target to any halfway-decent shooter. The little girl begs him to “pinky swear” that he’ll look after her. There’s a pause in the action as she talks of her absent daddy, Eddie feeling guilty since he too is an absent dad to a daughter he loves. “Maybe [your dad] is afraid of himself,” he tells her sadly.

Fans will be annoyed to see Antonio Banderas reduced to such dumbness, and may start noting other dumb detail in retaliation. Why give the token female guard a bow and arrow if she never actually kills anyone with it? Why does it say ‘Parfume Shop’ [sic] on the official map of the mall? August is a time of forgiveness – it’s way too hot to bear a grudge – and Security may get a pass as a harmless Assault on Precinct 13 variation, but you do have to wonder why, at the very least. Why does a star of Banderas’ talent get involved in such Jean Claude Van Damme-isms? Is Bulgaria such a picturesque place for a film shoot? In the end Vance puts it best, and most succinctly: “What a shit night”.

May the jamming force be with you