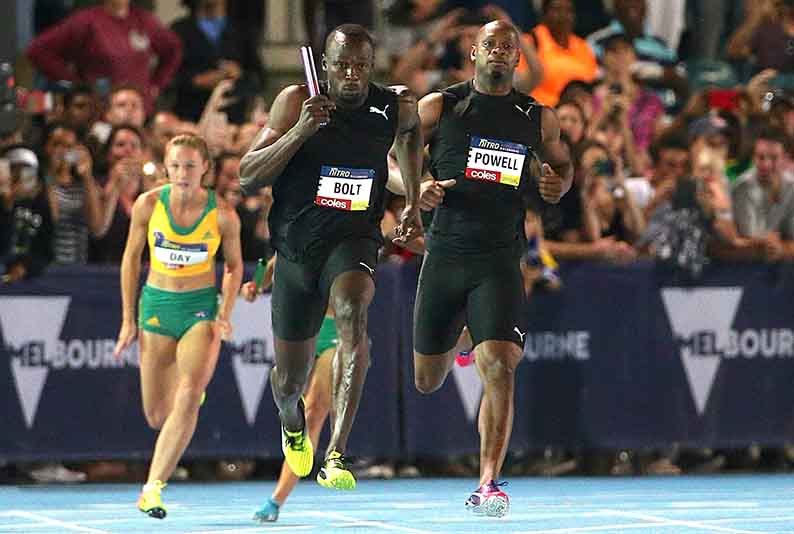 THE Nitro Series promised to make athletics a show and the sport’s ultimate show-man Usain Bolt capped its first meeting in Melbourne on Saturday by propelling his team of international “All-Stars” to a crowd-pleasing win in the 4×100 metres relay.

Taking the baton from Olympic gold medal-winning team mate Asafa Powell, Jamaican Bolt powered down the second leg at Lakeside Stadium before Americans Jenna Prandini and Jeneba Tarmoh completed the win in the mixed team event ahead of Japan and Australia.

Bolt’s first run of the year and first in Australia brought the curtain down on opening night of the Series, which has pledged to “revolutionise” athletics with a team-based event that borrows heavily from the formula of sport and entertainment which has underpinned Twenty20 cricket’s considerable success.

With athletics struggling to maintain a profile outside of the Olympics and rocked by major doping and corruption scandals in recent years, organisers hope the series can reinvigorate the sport by shaking up the traditional schedule of events – and sprinkling some star-dust from marquee man Bolt.

Bolt, who completed a “treble treble” of 100m, 200m and 4x100m relay Olympic titles at the 2016 Rio Games, was paid a seven-figure appearance fee to commit to all three meetings in the inaugural series in Melbourne this month and given a stake in the company running the event.

He fulfilled his role as athletics’ great entertainer, galloping on to the field before the meeting as flame cannons shot fireballs into the air and dancing to thumping pop music.

“Tonight is the first night, we just want to do something different,” Bolt told reporters as a crowd of hundreds of spectators craned necks to capture a glimpse.

“I’ve never handed (a baton) over to a girl. For me that was exciting.

“Everybody was having fun, everyone was trying to support their team mates.”

Bolt’s appearance helped secure a clutch of big names for the event, with American former Olympic 400m hurdles champion Kerron Clement running in his All-Stars team who won the overall event ahead of Australia.

With mixed team events, a 2x300m relay and an elimination mile in which runners were knocked out progressively, the meeting carried on with troupes of dancers gyrating to electronic music in front of an enthusiastic crowd of about 7,000.

It was a spectacle similar to any of the ‘Big Bash’ Twenty20 matches played at the nearby Melbourne Cricket Ground.

But whereas Twenty20 competitions are underpinned by the support of dozens of high-profile players, Bolt carries a lot of the burden on his own shoulders.

“It’s not an understatement to say that we wouldn’t be here today if it wasn’t for Usain Bolt and his management,” Athletics Australia president Mark Arbib told Reuters before the meeting.

“Usain Bolt and (agent) Ricky Simms have not just put their name to it, and are not just taking part, they have taken a stake in the business itself.

Like a number of federations across the globe, Athletics Australia has battled to arrest declining crowds and interest in the sport, initially conceiving of the series as helping to boost the low profile of the nation’s top athletes.

It had secured a prime-time broadcast for a local athletics meeting for the first time in nearly a decade while attracting key corporate backers.

Among them, Kerry Stokes, owner of the series’ host broadcaster Seven West Media, had invested A$1 million ($768,000) of his own funds, the Australian Financial Review newspaper reported.

The crowd was lower than the 8,500 stadium capacity but total tickets sold over the three nights of the series had comfortably outstripped those sold for the entire programme of national athletics events last year.

If ambition was an Olympic sport, organisers could already crown themselves gold medal winners.

They hope to take the series overseas and have targeted a slot in England after the world championships, where 30-year-old Bolt will make his farewell.

“Everything that we started thinking of as a dream is a reality, the big thing now is to prove that the concept works,” Arbib said.

“We know that the athletes love it, they’ve told us that they think this is the future … If this is successful, this will change the way people view athletics.”

Diamond League to have full programme of 32 disciplines in 2021