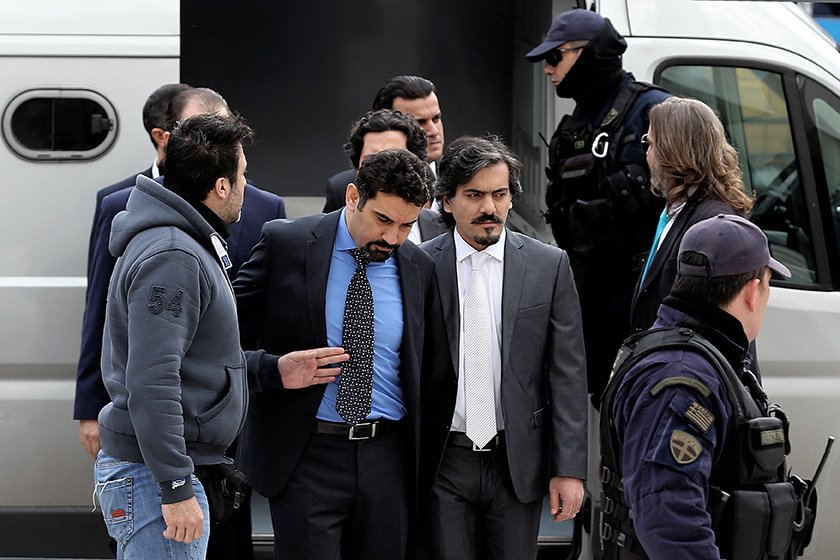 Some of the eight Turkish soldiers who fled to Greece

Extradition relations are never easy. Implementing the criminal law of other states is difficult but there are three basic principles that are accepted by most civilised states.

Obviously, it would not be conducive to peace between states if international extradition law enabled one state to provide succor to the killers of the head of state of another.

But in Europe extradition is also subject to the overarching provisions of the European Convention on Human Rights (ECHR) under which extradition is not permitted if the fugitive will face a real risk of being subjected to torture, or is likely to suffer a flagrant denial of justice.

In refusing to extradite eight Turkish fugitive officers who escaped to Greece after the coup d’etat of July 2016 the court upheld the jurisprudence of the ECtHR. Not an easy decision as the case presented by the Turkish government for their extradition was strong.

The fugitives had, after all, escaped to Greece in a military helicopter during a failed attempt to oust the democratically elected government of Turkey that involved an attempt on the life of its head of state. There could not therefore be a clearer case for extradition, although the nature and extent of their participation and whether it could be linked forensically to the attempt on the head of state’s life is not clear.

The Turkish government is familiar with applications to the ECtHR. After the attempted coup, Turkey derogated from her obligations under the ECHR – as she was entitled to in times of emergency – and her government took draconian steps against those suspected of supporting the coup, but it went way over the top. In the process, it contaminated the independence of an already compromised judiciary.

As every criminal lawyer knows there is no such thing as an open and shut case. Due process is everything in the practice of the law, yet the Turkish government has been cavalier about protecting the independence of the judiciary, manipulating its composition and its proximity to the presidency. There is therefore no justification for the Turkish foreign ministry’s angry suggestion that the Greek court’s decision was politically motivated.

Turkey’s angry reaction however is typical across the whole of Europe. Most states resent the ECHR – particularly when it clashes with their security and immigration decisions. The present British prime minister spent most of her time as home secretary fighting human rights law in Britain.

She emasculated the right to respect for private and family life in immigration law, and tried to do the same with the right to protection from torture by campaigning to withdraw from the ECHR completely. She became particularly annoyed with a decision of the ECtHR, which had the temerity to delay the deportation of an alleged terrorist from Jordan because his prosecution there was likely to involve the use of evidence obtained under torture in flagrant denial of natural justice.

In the event he was deported, tried and acquitted but the delay in his deportation did not sour relations with Jordan and it should not do so between Greece and Turkey. There is no reason why as and when due process is restored in Turkey a fresh request for extradition could not be made if the case against the fugitives remains extant.

For the time being however, given all that is known about Turkey in the corridors of the ECtHR and her decision to derogate from the ECHR during the current emergency, Greece’s Supreme Court had no choice but to refuse extradition.

The court’s decision is reassuring for human rights in Europe. Unfortunately the protection of human rights is in retreat these days in the face of the nationalism that has gripped those left behind by globalisation and automation. Their recent political gains in Europe and America make it imperative to remind people that they cannot have democracy without human rights.

According to the preamble of the ECHR, freedom and the rule of law are best maintained on the one hand by effective political democracy and on the other by the observance of fundamental human rights.

Many politicians attack civilised values to gain power via the ballot box at the expense of human rights. But the populism of Adolph Hitler that brought the Nazis to power in Germany in 1933 is a salutary reminder that you cannot ignore human rights and remain a democracy.

It is very easy for unscrupulous politicians to appeal to nationalism and religious hatred and stir up fear and resentment of immigrants and refugees and stoke up people’s instinctive need to find scapegoats. The cost last time however was fifty million dead and the destruction of communities and cities across the whole world.

If America has gone rogue and NATO is obsolete, it is time for the EU to step up.

The era of the compliance officer

Why the majority want partition