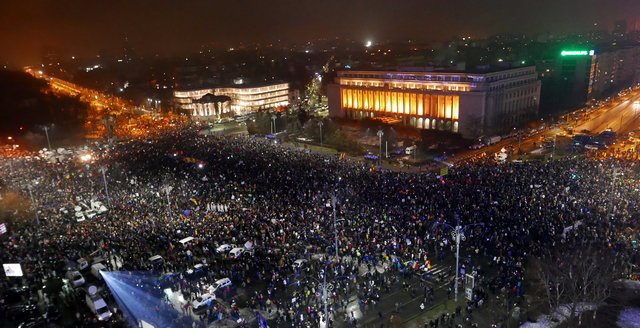 Protesters gather in front of the government building during a protest in Victoriei Square, in Bucharest

IN ROMANIA, after five straight nights of mass demonstration in Bucharest’s main square, the government agreed to withdraw an emergency decree that decriminalised various abuses of political power (on the grounds that the jails were too crowded). If you defrauded the state of less than $47,500, under the new rules, you might have to pay it back, but you wouldn’t go to jail.

More to the point, those already serving sentences or facing charges for stealing, say, $47,499 would be released from jail or see the charges dismissed – including the leader of the governing Social Democratic Party, Liviu Dragnea, who was convicted of stealing only $27,000. (That’s not necessarily how much he stole; just how much they could PROVE he stole.)

Romania used to be one of the most corrupt countries in Europe, but since it joined the European Union in 2007 it has been under great pressure from Brussels to clean up its act. There was also huge domestic pressure from ordinary Romanians who are sick of their venal politicians, and the anti-corruption drive was making real progress.

Then last Tuesday Prime Minister Sorin Grindeanu’s government issued its decree freeing hundreds of jailed politicians, officials and even judges. It was due to go into effect next Friday, but right away the crowd came pouring out into the streets in Bucharest and all the other big cities.

After five nights of mass demonstrations, the government cancelled its decree on Saturday. The Crowd won, and both justice and democracy were well served.

The other very dodgy decree of recent days was in Washington, where President Trump signed an “executive order” imposing a 90-day ban on citizens of seven Muslim-majority countries seeking to enter the United States (even if they were legal US residents or had been issued visas after vetting by US embassies) and an indefinite ban on Syrian refugees.

Like the Romanian decree, its legality was doubtful. As in Romania, the protesting crowds came out in large numbers in the United States (though proportionally in much smaller numbers, and certainly not for five successive nights). But what really brought Trump’s plan grinding to a halt, at least for the moment, was a judge.

U.S. District Senior Judge James Robarts of Seattle issued an order suspending the Trump ban – and even President Trump obeyed it (although he did refer to Robarts, with typical graciousness, as a “so-called judge”). The whole machinery of government went into reverse, entry visas are being re-validated, and even Syrian immigrants are being admitted to the United States again. The rule of law has prevailed.

Two crises in two democratic countries, and two reasonably satisfactory resolutions. It was the Crowd that did the heavy lifting in Romania, and the Law that did the crucial work in the United States. But they should not be seen as alternatives; sometimes you need them both.

Robarts was not required to make a full legal case for his action at this stage in the proceedings: he simply ordered the ban suspended to avoid serious harm being done to individuals by an executive order that may contravene the First Amendment to the US Constitution.

When the case goes to the appeals court, and possibly then to the Supreme Court, the argument of those opposing the ban will doubtless be that it flouts the First Amendment requirement that one religious denomination cannot be officially preferred over another.

This may persuade the Ninth Circuit Appeals Court in San Francisco, which is relatively liberal, and even to the Supreme Court, which will continue to be split evenly between liberals and conservatives until Trump’s nominee for the ninth seat on the Court is approved by Congress. Or it may not.

Even if the appeal courts ultimately rejects Robarts’s argument and reimposes the ban, the Law will have successfully curbed the abuse of executive power. It always has to be curbed, because even with the best of intentions those who hold power will inevitably try to expand it – and sometimes they do not have the best of intentions.

The US Constitution has won the first round of the battle against Trump’s authoritarian tendencies. Full marks to James Robarts (who was nominated, by the way, by George W. Bush’s Republican administration).

But four years is a long time, and there will be occasions when lawyers won’t be enough. The Crowd will be needed as well: demonstrations as large, as disciplined and as patient as those in Romania. And as suspicious of being betrayed once they have gone home.

The night after the Romanian government cancelled its “emergency decree”, there was the biggest demonstration of all: half a million people in Victory Square in Bucharest. Why? Because the government had muttered something about addressing the same “issue” of allegedly crowded jails through normal legislation in parliament, which would still really be about getting crooked politicians out of jail.

So they won’t go home until Prime Minister Grindeanu promises not to bring the subject up again.

Our View: The return of old habits that led to bankruptcy of the state