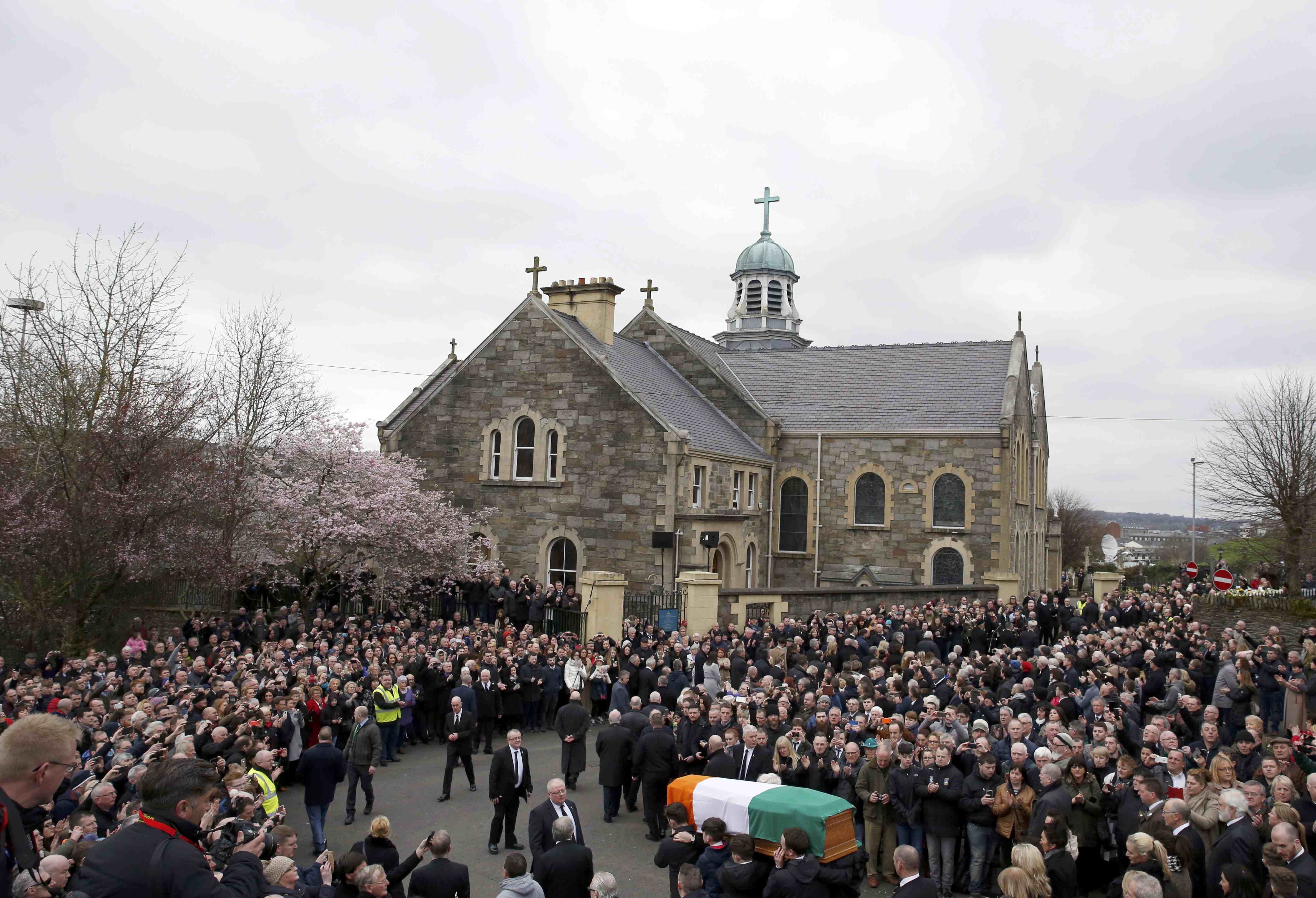 The coffin of Martin McGuinness arrives at St Columba's Church during his funeral in Londonderry, Northern Ireland, March 23, 2017. REUTERS/Phil Noble

Martin McGuinness, who began as a terrorist and ended up as deputy first minister in Northern Ireland’s power-sharing government, died peacefully in hospital on Monday aged 66. His career spanned almost five decades in the history of that small but troubled place – and by resigning from the power-sharing government in January, he began a new and possibly final act in that long-running drama.

If it really is the last act in the Northern Irish tragedy, leading eventually to some form of “joint sovereignty” over Northern Ireland by the United Kingdom and the Irish Republic, then there may be some more blood spilled before the end. That would not have bothered McGuinness, for all his latter-day reputation as a man of peace.

The initial Catholic protests against that in the mid-1960s were non-violent, but McGuinness (aged 21) was already the second-in-command of the Provisional Irish Republican Army in Derry at the time of Bloody Sunday in 1972, when 14 civil rights protesters were killed in the city by British soldiers.

The Provisional IRA exploited atrocities like that to convert the Catholics’ non-violent struggle for civil rights into a guerrilla war employing terrorist tactics and aiming for unification with Ireland. McGuinness was one of the foremost advocates of violence, and quickly rose to become the IRA’s chief of staff.

He claimed to leave the IRA in 1974 in order to enter politics (which made it possible for him to talk to the British authorities), but all local observers agree that he remained a senior IRA operational commander at least down to the end of the 1980s. As such, he was probably responsible for such IRA innovations as “human bombs” (not to be confused with suicide bombs).

In 1990, for example, Patsy Gillespie, a Catholic civilian who worked as a cook at a British army base, was abducted by the IRA and strapped into a van packed with 450 kg of explosives. While his family was held hostage, he was ordered to drive the van to a British army check-point – whereupon the bomb was detonated, killing Gillespie and five British soldiers.

In all, the IRA killed 1,781 people during the period when McGuinness was a senior commander, including 644 civilians, and McGuinness was probably involved in the decision-making on half of those attacks. Fintan O’Toole, a columnist in the Irish Times, recently called him a “mass killer”.

But if so, he was a pragmatic mass killer. When it became clear in the 1990s that the campaign of violence was not delivering the results McGuinness had hoped for, he was open to peaceful compromise, at least until circumstances improved. He played a key role in persuading most of the more dedicated IRA killers to accept the power-sharing government embodied in the 1998 Good Friday Agreement.

As the leader of Sinn Fein, the IRA’s political wing, in Northern Ireland, McGuinness became the deputy first minister of the province, sharing power with the biggest Protestant party, the Democratic Unionist Party (DUP). He was seen as a calm, constructive politician during his ten years in office – but he never lost sight of his ultimate goal.

When he resigned in January, he had two excellent pretexts for doing so. First, he knew that he was dying (from a rare heart condition). Second, First Minister Arlene Foster, leader of the DUP and his partner in office, was entangled in a profoundly embarrassing energy scandal but was stubbornly refusing to step aside.

However, McGuinness was also well aware that Britain’s decision to leave the European Union in last June’s referendum created new possibilities in Northern Ireland (which voted heavily to stay in the EU).

The open border between Northern Ireland and the Irish Republic depends on both countries being part of the EU. When Britain leaves it will almost inevitably become a “hard” border that controls the movement of both goods and people. That would greatly anger the Catholics of Northern Ireland, and if Sinn Fein goes on refusing to appoint a deputy prime minister then no new power-sharing government is possible either.

There was an unscheduled election early this month that produced no movement from Sinn Fein, and another may be called at the end of next week. But there is no sign that either Sinn Sein or the DUP will budge, and in the end Britain may be obliged to re-impose “direct rule” from London on Northern Ireland, which would anger Catholics even more.

McGuinness was probably not hoping for a return to violence, but he was undoubtedly open to it if necessary. Solving the border issue will require creative thinking all round, and could lead to outcomes the IRA and Sinn Fein would welcome – like joint British-Irish sovereignty over Northern Ireland. A little violence could help to stimulate that kind of thinking.