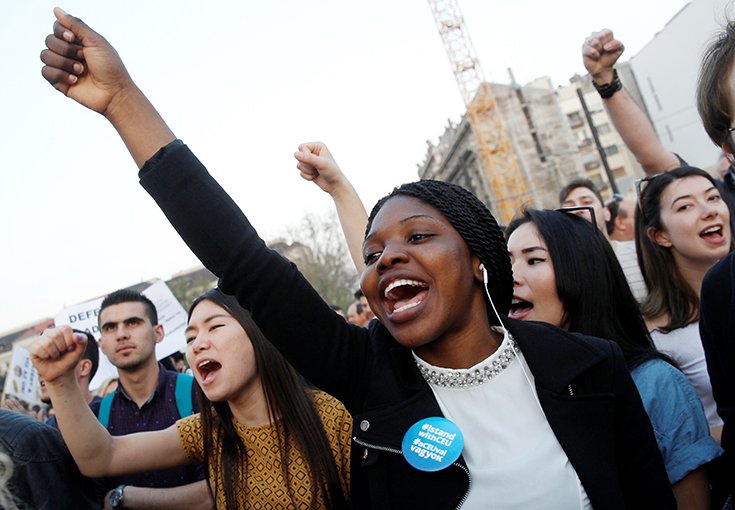 Hungary approved a new law in a fast-track procedure on Tuesday that could force a university founded by financier George Soros out of the country despite a protest against the plan in Budapest and condemnation abroad.

The law, which the government says is designed to address administrative shortcomings of foreign universities, marks the next chapter of a clampdown on independent institutions, which has seen Orban allies boost their influence over the judiciary, the media and the central bank.

Lawmakers passed the legislation with 123 votes in favour and 38 against, while 38 deputies did not vote. Voting was briefly interrupted by the sound of a siren blaring from a megaphone held up by an independent lawmaker in protest.

“The organisations of George Soros operating in Hungary and around the world are just such pseudo-civilian agents and we are committed to stamping out such activity with all available legal means,” Zoltan Balog said.

The CEU, which was founded in Budapest in 1991 following the collapse of communism and has 1,400 students, said it operated lawfully and was accredited to award Hungarian and US degrees.

Thousands of students, professors and supporters rallied in Budapest on Sunday demanding the government withdraw the draft legislation. Another protest is planned near the CEU on Tuesday.

Orban’s government, which faces an election in just over a year, submitted the bill last week to regulate foreign universities, setting several new requirements, which could force the CEU to leave Hungary.

The Council of Europe, Europe’s leading human rights organisation, said it was closely following the developments.

Under the law, foreign universities must have a campus in Budapest and in their home country. The CEU, which only operates in the capital, is the only international college with no arm elsewhere.

A passage in the law stipulates that foreign universities could award degrees in Hungary only if the governments of Hungary, and in CEU’s case, the United States, sign an accord on the matter within six months of the law taking effect.

Socialist lawmaker Istvan Hiller, a former education minister, said the legislation was tailor-made to hit the CEU, adding it was impossible to reach such an agreement so quickly.

“This (bill) has zero professional justification,” he told parliament.

More than 500 leading international academics, including 17 Nobel Laureates have come out in support of the CEU. The US State Department has urged Budapest “to avoid taking any legislative action that would compromise CEU’s operations or independence.”

Soros’s Open Society Foundations, which support democracy, have been active in Hungary for three decades and Soros financed foreign scholarships for Hungarian politicians, including Orban, when communism collapsed.

Europa League final to be held after domestic season

Farmers want to regain control of bailed out Co-op