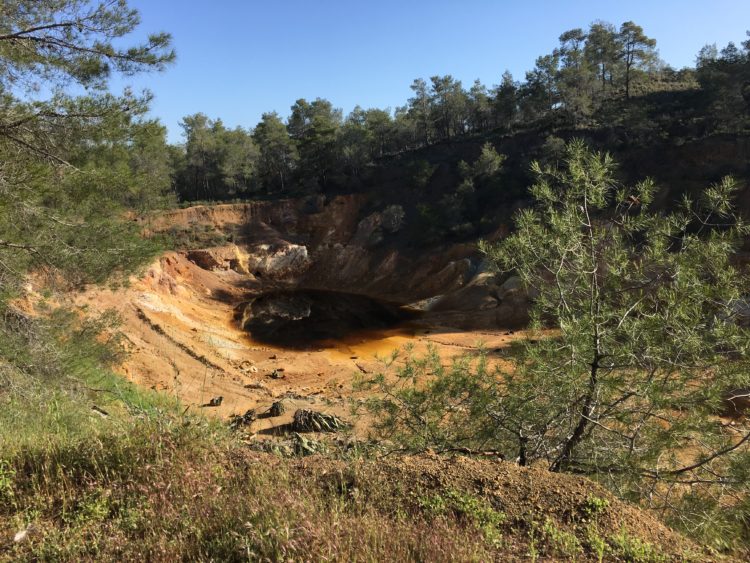 South of Mathiatis, hidden in the pinewoods at the foot of Strongylos hill, is the oldest mine of the area, which will soon come to life again with gold mining and works to restore it.

In an interview with the Cyprus News Agency (CNA), Mathiatis community leader, Theodoros Tsatsos, said the mine was considered “a great gift” to the community, since it will bring many benefits to the broader region, including the creation of some 50 new jobs.

Tsatsos pointed out that to the northwest of the mine is Mavrovouni area, where caves and rocks with rust point out to the existence of furnaces to process copper in antiquity.

He explained the Hellenic Mining Company approached the community with an interest in exploiting the mine and soon, with the signing of the contracts, works will begin.

“As a community, we did not ask for this project ourselves. It was a copper mine BC. From 1935 to 1945 it was mined for gold. In those times, miners used pickaxes, pans, and ditches. Today mining is more sophisticated. There is modern machinery which can reveal the gold with greater success,” Tsatsos said.

He added that “40 per cent of the volume that the company will transport to Skouriotissa is debris processed during 1935-1945, as well as part of the crater”.

Tsatsos noted that “before the Community Council officially received the application or the environmental study, we invited the company to come before the community council to present its intentions”, and a meeting took place in the presence of the Council`s advisers, including an environmental chemist and geologist, the legal adviser, and the technical adviser.

“But before proceeding we called a community assembly and invited the company to present the project to the members of the community and answer questions”, he said.

In a subsequent referendum, residents voted 62 per cent in favour and 38 per cent against, and thus it was decided that the works would proceed, as long as specific conditions set out by the council were met.

The conditions include paving some two kilometres of roads to create a bypass for heavy vehicles and to minimise dust from traffic, to observe the timeframe of 25 months for the transportation of debris and gold mining, to remain within the boundaries of the mine and not expand it even if new deposits are found, to continuously measure dust levels and take measures, such as spraying water, in the event that high concentration of dust was seen, to protect any antiquities found, to preserve nature and only cut down trees where absolutely necessary and under the supervision of the forestry department, and to restore the site.

Tsatsos said “the mine is visited by many tourists and in the new year this archaeological site will be included in the Cyprus Tourism Organisation list”, so it was requested that the site be restored — with a play area, a park, parking, kiosks, benches, pathways leading safely into the crater etc.