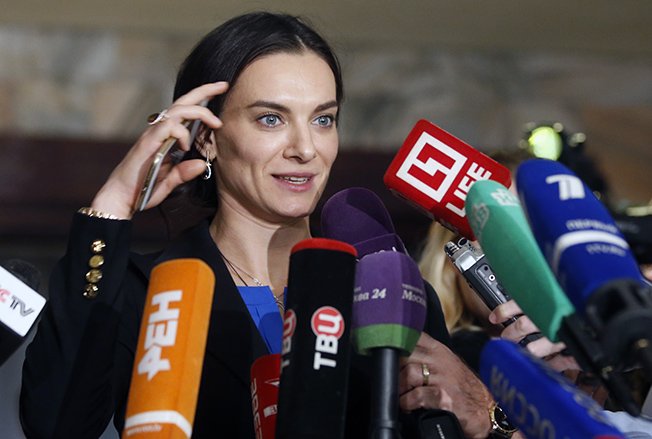 Russia is making progress but more work lies ahead, including the removal of Yelena Isinbayeva as chair of the Russian Anti-Doping Agency (RUSADA), before the country can be ruled compliant, the World Anti-Doping Agency said on Thursday.

It has been nearly two years since RUSADA was branded non-compliant and WADA said Russia will remain an outcast until four key demands are met, chief among them Isinbayeva’s removal from RUSADA and her replacement with an independent chair and vice-chair.

Isinbayeva’s appointment last December outraged WADA, as the former Olympic pole vault champion was an outspoken critic of a decision by the International Association of Athletics Federations to ban Russian track and field athletes from international competition.

That decision, which was prompted by a series of reports by WADA that found Russia had conducted rampant state-sponsored doping, kept the athletes, including Isinbayeva, from competing in the 2016 Olympics.

Rob Koehler, chair of WADA’s Compliance and Review Committee, did not mention Isinbayeva by name when giving his report on the Russian situation to the Foundation Board on Thursday, but confirmed changes were coming when questioned by former-WADA chief Dick Pound.

“Is this the person about whom everyone has complained,” asked Pound.

While Koehler pointed to progress, Pound has not been impressed particularly by Isinbayeva’s presence.

“They (Russia) are clearly jerking us around putting the pole vaulter (Isinbayeva) in charge,” Pound told Reuters. “That was Russia basically giving us this,” he added, holding up his middle finger.

“If you want to get back inside you better bloody well convince the people who you need to convince that you have turned the corner.”

Other changes being demanded by WADA include drug testers being allowed access to closed cities, where athletes continue to find sanctuary from testing, access to athlete biological passports and the implementation of a conflict of interest policy.

The Foundation Board was told that Russia was in the process of meeting all four conditions which would take it a step closer to full compliance.

“The board decided that if we receive, as I am sure we will, that they (Russia) are taking care of the four small conditions then they will start a testing program that is a crucial part of the road map we have towards full compliance,” WADA chief Craig Reedie told Reuters.

“I’m grateful today for the Foundation Board for agreeing that testing in Russia will be able to commence hopefully at the beginning of June.

“The next Foundation Board meeting is in November and I really hope by that stage the road map process is finished.”

Paphos new showroom opening on May 20