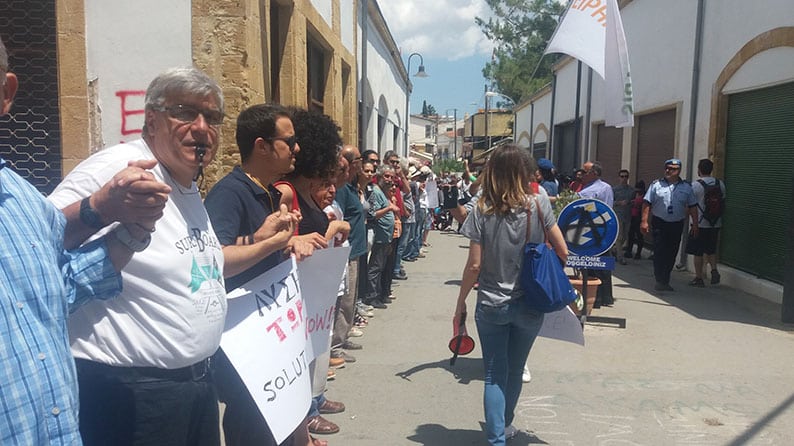 Members of the Greek Cypriot and Turkish Cypriot communities voiced their demand for the reunification of Cyprus on Saturday in the buffer zone at the Ledra street checkpoint, with slogans, whistles, drums, flags, and makeshift signs.

Around 150 attendees at the peace rally shouted slogans in Greek, Turkish, and English, and waved signs reading ‘Peace now’, ‘We want a solution now’, ‘Help us reunite’, ‘Leaders listen: solution now’, and ‘We are Cypriots’.

They sang Cypriot songs and formed a human chain along the Ledra street buffer zone.

“We will remain united and continue to fight, with the vision of tomorrow’s Cyprus alive. We will lead the march. We will solve it our way. Every citizen individually, every Greek Cypriot with their Turkish Cypriot compatriot, and all together with cooperative projects.”

The rally followed the announcement of the two community leaders’ failure to find enough common ground to reconvene the Conference on Cyprus in Geneva, with UN special adviser on Friday officially announcing the end of his nine-day efforts to mediate a breakthrough.

“We are here and we shout that the struggle continues,” Hadjidemetriou said.

“Victory is close, and we will win. Today is not the end, but the start for a new struggle. We will go all the way. Until Cyprus has been reunited.”

Addressing the rally, Turkish Cypriot journalist Ezra Aygin thanked attendees and said “you are not members of a political party that has told you to be here”.

“You are here because your heart told you to be,” she said.

“And this is very important, since strength comes from the heart.”

As Cypriots, she said, the only way we can have a future on this island is if there is a solution, “one reunified island, one Cyprus”.

“It is the only way to have a better future, a safe future, a future of prosperity. The other way, that of partition, will only take us down dangerous paths.”

On behalf of an activist group, Andreas Lordos said the rally “began days ago in support of the two leaders’ talks, but people eventually saw a play they had seen before”.

The rally has convened daily for the past week at 7pm, which, organisers said, will continue.

BA cancels all flights from Heathrow, Gatwick on IT outage (Update)