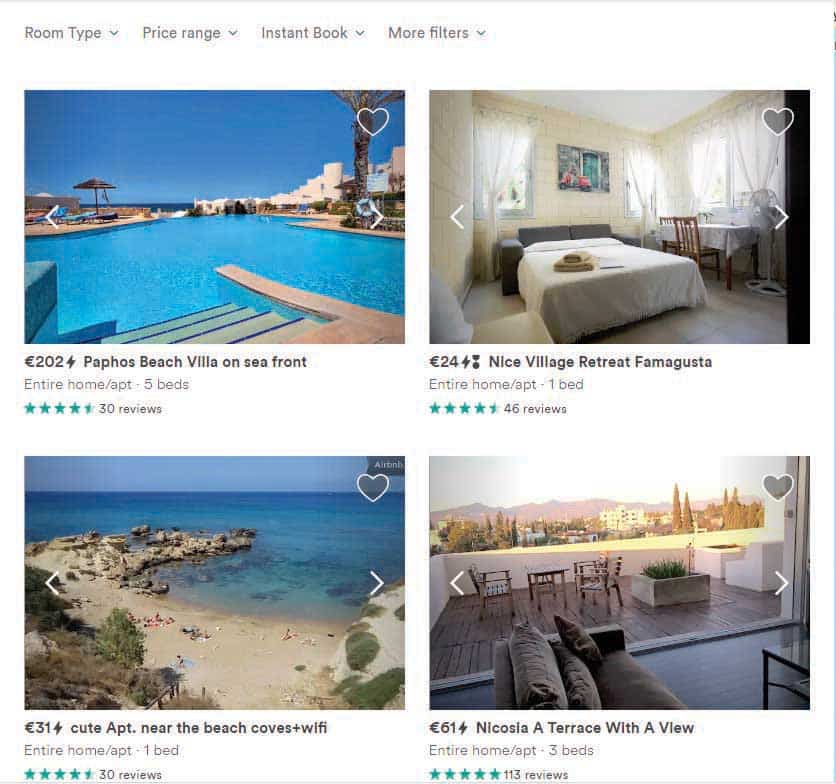 Airbnb is to accommodation platforms what Facebook is to social media, but was relatively slow to take off in Cyprus.

That has changed, not only in tourist areas at the beach but even in Nicosia, which in 2010 had no listed properties.

With the summer tourist season fast approaching, and Cyprus predicting another bumper year, more homeowners than ever are using the internet accommodation platform to rent their houses, flats or rooms.

About half of the properties are apartments or houses and half private rooms, with prices starting from €9.

“Airbnb seems to be a new phenomenon,” Elena Adamou from the Cyprus Tourism Organisation commented, “the numbers are going up.”

“I have used it with my family several times,” Anna Georgiou said. “It is more convenient, there is more space and one can cook. It is better than staying in a hotel room for three people and the price is the same.

“It depends on the destination. If you don’t care about the breakfast and the hotel facilities and want to have a city experience it makes sense. If you want a swimming pool maybe you would go to a hotel.”

“I chose Airbnb because it is so popular and I have a big choice. It is much cheaper and an easy way to get in touch with locals,” 23-year-old Alexia Lambrou said. “It varies. If you are renting a room in a place where a local is staying you can learn about a city from a local. On the other hand you might feel a bit uncomfortable coming back late. There is always a risk but in general the travelling community is very respectful, at least in my experience.”

Kyriakos Hadjiyiannis, 25, rents out one of the rooms of his apartment in Nicosia. “I chose Airbnb because it is the most well-known and has a straight forward policy,” he commented.

“I used this particular platform because I didn’t have to pay upfront,” house owner Sue Russell who has rented out rooms in her house in a Cypriot village said. “It is easy. You don’t need any experience, you load the pictures and text on the site and the money is guaranteed, you don’t have to worry about cash or credit cards. They always pay on time.”

Her reasons for renting the rooms was not just to make money. She also wanted to meet new people with a different outlook and to talk to them, a wish she shares with many of the travelers who choose to stay in a room in someone’s house.

Airbnb charges hosts a service fee every time a booking is completed. The amount of the host service fee is generally three per cent.

They also charge guests a fee after a booking is confirmed. Guest service fees typically range between 6 and 12 per cent of the total accommodation fee and vary depending on the specifics of the booking.

They are helping both hosts and travelers by providing a resolution centre for disputes, putting up reviews and maintaining a messaging service for each request.

The platform was founded in the USA in 2008 and now has more than two million listings worldwide.

Hoteliers have long been unhappy with the private rental system. Long before Airbnb, British expats with second homes in Paphos villages, for example, were renting out their villas to tourists. Whilst hoteliers’ concerns are about the unfair competition, they are also about legalities and money matters.

“Strictly speaking it is not allowed to rent individual property for commercial purposes for less than 30 days,” head of the Cyprus Hotel Association Zacharias Ioannides said. “It is not fair competition.”

“There is no benefit to the local community or the state,” he added. “They don’t pay taxes, this is black money.

“I believe this is not the way to promote renting individual property. They should be procedures in place to ensure health and safety and hiring accommodation procedures.”

Although Airbnb advises that home owners who rent their property to be insured “who can ensure that this happens”. There have also been incidents where people found their accommodation was not up to their expectations, and there was little they could do about it.

With the numbers rising the hoteliers’ association hopes more than ever that regulations will be put in place.

“We have made suggestions to the CTO and the tourism ministry and studies are in the pipeline,” he told the Sunday Mail.

“The ministry of commerce is looking at what other European countries are doing,” CTO official Adamou said. “In most of them there are no regulations. But at the same time Cyprus is different. Countries like France are not so dependent on tourism while in Cyprus it is a major industry.”

Enosis was behind so many early lost opportunities