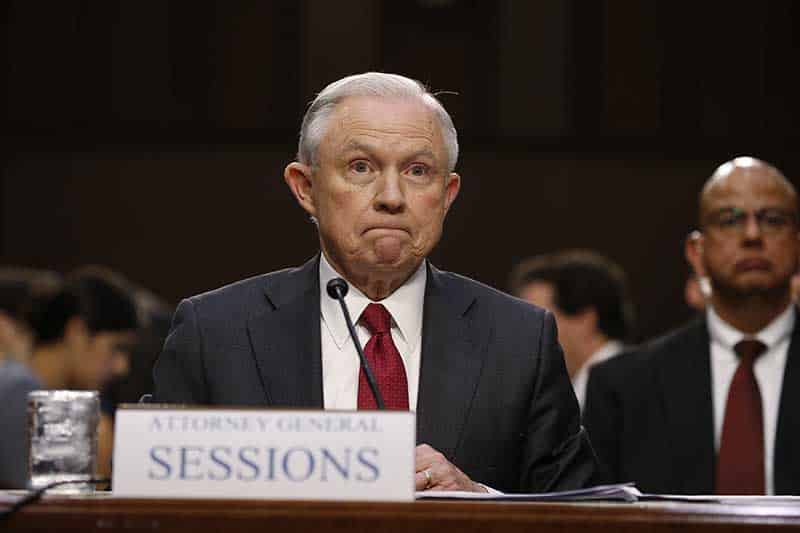 US Attorney General Jeff Sessions, appearing at a high-stakes Senate hearing, on Tuesday denounced as “an appalling and detestable lie” the idea that he colluded with Russian meddling in the 2016 presidential campaign.

Sessions, a senior member of Republican President Donald Trump’s Cabinet and an adviser to his presidential campaign last year, testified about his conversations with Russian officials and whether he intentionally misled Congress, as the Senate Intelligence Committee probes the Russia matter.

“I have never met with or had any conversation with any Russians or any foreign officials concerning any type of interference with any campaign or election in the United States. Further, I have no knowledge of any such conversations by anyone connected with the Trump campaign,” Sessions said.

“The suggestion that I participated in any collusion or that I was aware of any collusion with the Russian government to hurt this country, which I have served with honor for over 35 years, or to undermine the integrity of our democratic process, is an appalling and detestable lie,” he said.

Sessions is the most senior member of Trump’s administration caught up in the controversy over whether associates of the president colluded with Russia to help Trump win the election.

The committee’s chairman, Republican Richard Burr, told Sessions the hearing was “your opportunity to separate fact from fiction” and “set the record straight on a number of allegations reported in the press.”

Even before Sessions testified, attention in Washington swiveled to whether Trump might seek to fire Robert Mueller, named last month by the Justice Department to head a federal probe into the Russia issue.

Sessions told the senators that he has confidence in Mueller but said he had “no idea” if Trump did because he had not spoken to the president about the matter. Asked whether he would ever take any action to remove Mueller, Sessions said, “I would not think that would be appropriate for me to do.”

Such a move would be complicated and potentially politically explosive. Deputy Attorney General Rod Rosenstein, the person who would be responsible for carrying out any such dismissal, told a different congressional panel on Tuesday he would not fire Mueller without good cause and he had seen no such cause.

Sessions appeared before the Senate Intelligence Committee just five days after James Comey, whom Trump fired as FBI director on May 9, told the panel Trump ousted him to undermine the agency’s investigation of the Russia matter. Sessions had written a letter to Trump recommending Comey’s firing.

Burr said he wanted to know from Sessions what meetings he had with Russian officials or their proxies on behalf of the Trump campaign, why he recused himself from the Russia investigation and what role, if any, he played in the firing of Comey.

The testimony by Comey marked the latest chapter in a saga that has dogged the Republican Trump’s first five months as president and distracted from his domestic policy agenda including major healthcare and tax cut initiatives.

Sessions is a former Republican U.S. senator and an early supporter of Trump’s presidential campaign.

In March he acknowledged he met twice last year with Russia’s ambassador to Washington, Sergei Kislyak. Sessions said he did not mislead Congress because the encounters were part of his job as a U.S. senator, not as a Trump campaign representative. But Sessions recused himself from the Russia investigation in March after the revelations of the two Kislyak meetings.

The abrupt dismissal of Comey prompted Trump’s critics to charge that the president was trying to interfere with a criminal investigation.

Asked about media reports that he had met with Kislyak on a third occasion at a Washington hotel last year, Sessions testified that did not remember meeting or having a conversation with the ambassador at the event. Sessions said he “racked my brain” and had no meeting with any Russian in his capacity as a Trump campaign adviser.

US intelligence agencies have concluded that Russia interfered in the election to help Trump in part by hacking and releasing damaging emails about Democratic candidate Hillary Clinton.

Trump has been publicly dismissive of the Russia investigation for months. A Trump confidant, Chris Ruddy, told “PBS NewsHour” on Monday the president was weighing whether to fire Mueller.

Amid the firestorm over Comey’s dismissal, the Justice Department’s Rosenstein appointed Mueller as special counsel to oversee the probe into Russian election interference and any collusion by Trump aides. Russia has denied interfering in the U.S. election. The White House has denied any collusion.

If Trump were targeting Mueller, dismissing him would not be a simple matter. Trump could recommend to the Justice Department that the special counsel be fired. Since Sessions is recused from these matters, he would likely would send such a recommendation to Deputy Attorney General Rosenstein.

Our View: Bland document all that is needed for conference start