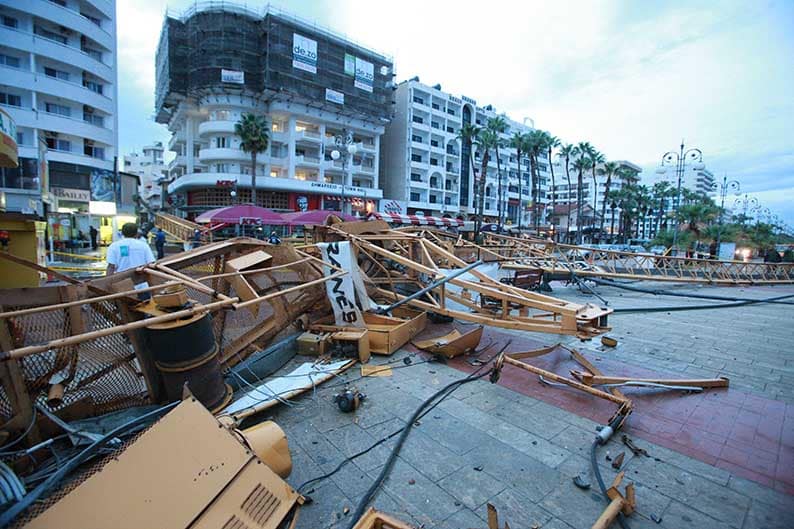 Larnaca District Court on Thursday acquitted the operator of a 200-tonne tower crane that fell on to Phinikoudes promenade in October 2012 – killing a 65-year-old woman, injuring three others and damaging five cars – after the prosecution failed to prove the case.

The crane operator, Christos Peristianis, had been charged with causing death through reckless or dangerous acts, omissions of persons responsible for dangerous equipment and negligent acts causing physical harm and serious bodily harm.

In its ruling, the court said was Peristianis was accused on October 10, 2012, by want of precaution or by by rash or careless act not amounting to culpable negligence, of not completely unlocking the crane brake, meaning strong winds caused its fall, resulting in the death of Christine-Marie Coleman and the injury of three other people.

Any person who by want of precaution or by by rash or careless act, not amounting to culpable negligence, unintentionally causes the death of another person is guilty of a misdemeanour and is liable to imprisonment for two years, or to a fine not exceeding one €170.

He was also accused of, while he was solely responsible for the crane, having neglected to take the necessary precautions against any possible risk arising from such a motorised machine.

The T-shaped crane- 44-metres in length and 80 metres in width – was part of a construction site managed by a contractor hired by Larnaca municipality to build an extra two floors on top of the town hall on Phinikoudes Avenue. It fell on to the promenade during strong winds averaging between 6 and 9 on Beaufort scale, crashing down on a moving car containing Victor and Christine-Marie Coleman, 65 and 67, who were permanent residents of Vrysoulles village.

The two had to be freed from the mangled car by emergency services before being rushed to hospital. Christine-Marie died at the hospital from multiple injuries including haemorrhages in her brain and lungs, while her husband sustained head and brain injuries and internal cranial haemorrhaging.

A 47-year-old Iranian man lost his finger trying to flee from the falling crane on foot, and a 60-year-old Cypriot pedestrian suffered a fractured hand.

Eye-witness accounts said the crane’s fall was broken by the cars underneath, which changed the direction of the crane as it hit the ground, narrowly missing a kiosk with seven people inside.

The court ruled that prosecution had failed to prove its case against the accused, since it could not prove that Peristianis “did not take all the appropriate action to unlock the crane to rotate with the wind’s direction”. The fact that he was the last person to operate the crane, the ruling said, “does not prove in itself, and especially in a criminal case, which should be beyond reasonable doubt, that he failed to take the necessary precautions, which resulted in the crane falling”.

The court also ruled that the operator had partially unlocked the crane brake and therefore took the appropriate action that requires full unlocking of the brake.

“The accused actually did what the police accused him of failing to do, namely to deactivate the brake”, the ruling said. It added that the operator is not considered responsible because the brake was not fully deactivated.

The court also raised questions over the checks carried out on the crane by its owner and the state electromechanical services on the remote control with which the break was released. It was reported that about 10 months before the accident, the remote control was destroyed by lightning and replaced by one from another machine that was not tested for compatibility.

The new remote control, the court said, did not have an operator’s notification function that the rotation brake was released, and this gap created a breach in the prosecution’s attempt to prove that the operator was guilty. It also said that it took into consideration that the crane was last operated by Peristianis at 10.30am that day, while the accident occurred at 8.30pm.

The court also said that after the accident the crane was stored in the premises of the construction company that owned it instead of being handed over to police. It said that this raised an issue with possible tampering.

May offers ‘fair deal’ for EU nationals in Britain