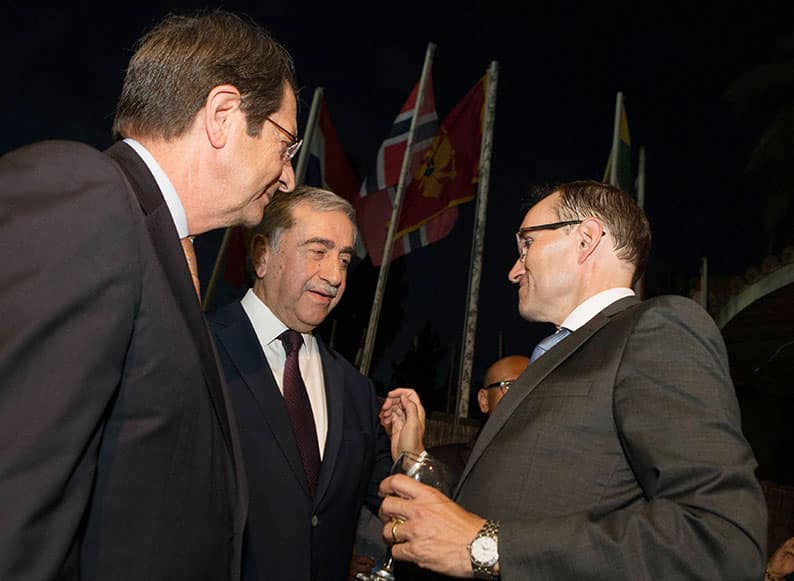 The leaders of the two communities came together for the first time on Thursday evening since their meetings in Switzerland back in July.

The reception, held at the Ledra Palace hotel, in the buffer zone, was also attended by foreign minister Ioannis Kasoulides, politicians, diplomats, members of civil society organisations and media representatives.

Anastasiades and Akinci chatted very briefly, exchanging pleasantries, before stepping into the hotel.

In an address  at the reception,  Eide acknowledged that “things are difficult but I would not give up on the dream.”

Referring to the work done so far in the negotiations, he said “there is a platform to build on”, noting that there was a serious effort towards a genuine federal Cyprus.

He referred to the discussions on the issues in the agenda of the talks, including security concerns.

“The UN role is to be a facilitator, and we will always be at the disposal of the parties. The UN does not give up on Cyprus, it needs to know there is a process, which can only be owned by the Cypriots,” he stressed.

He admitted that over the past 27 months of negotiations he “learnt a lot” but “probably not enough.”

“I leave very, very confident that the best solution in Cyprus is a united federal Cyprus in line with European principles, bizonal bicommal. These are the UN parameters, I believe in them, we in the UN at least believe in them,” he said.

Referring to the two leaders as “two of my best friends” in Cyprus who come from Limassol, Nicos and Mustafa, Eide said he has learnt that things which might look easy to outsiders are not so easy to insiders.

He said the two negotiators, who were present at the reception, Andreas Mavroyiannis and Ozdil Nami, met 154 times over the 27 months of negotiations he has been involved in, in the context of the Cyprus peace process.

Members of the public stood outside the Ledra Palace holding pro-peace placards.

One read: “Eide is leaving but we’re still here waiting for a solution. We deserve peace.”

The Norwegian diplomat will be leaving the UN post as he will be running in his country’s parliamentary elections scheduled for September 11.

Eide assumed the post of Special Advisor in August 2014. Under his watch, there took place three rounds of proximity talks in Switzerland, two conferences on Cyprus (in January and July of 2017), as well as three meetings between the two leaders and the UN chief in New York.

The Norwegian is the 27th person to be appointed as UN special representative or special envoy to Cyprus.

Both sides have since blamed each other for the collapse, while the Greek Cypriots have also censured Eide, accusing him of being biased and a liar.

Earlier in the day, Eide had held separate meetings with Anastasiades and Akinci.

Speaking to reporters later, Eide said resurrecting the peace process at this point could be done only by the two sides on the island, not by the UN.

Our View: Eide deserved much better treatment than he received