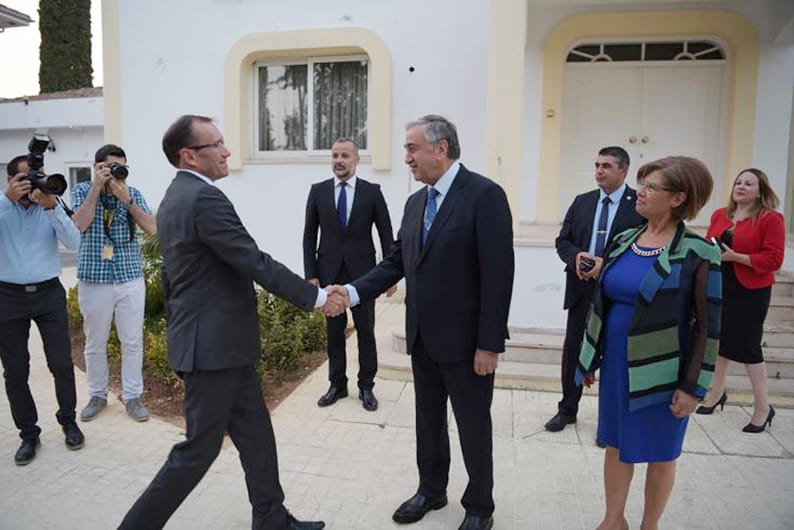 UN Special-Adviser Espen Barth Eide maintained his integrity and remained focused on his goal to solve the Cyprus problem despite the barrage of unfair criticism he received – which wasn’t from the north of the island – Turkish Cypriot leader Mustafa Akinci said on Friday.

Speaking during a farewell reception held in honour of Eide before his departure at the ‘presidential palace’ in the north, Akinci said during the 27-month long negotiations Eide had been a part of, he had the responsibility of maintaining a very delicate balance between the two sides.

Although the adviser had received a lot of criticism – which was not from the northern part of the island – “Eide leaves us with a clear conscience having done everything in his hand to find a mutually acceptable solution in the island.”

He would also be leaving with “a bitter feeling that (a solution) was never reached,” Akinci said.

Eide, in his own speech called the Turkish Cypriot leader “a true friend and real leader” saying Akinci had been honest from day one right through the end and “I never doubted that you meant everything you said.”

That is what this country needs, Eide said. Truly honest leaders.

Akinci noted that although a solution had not been reached in Crans-Montana, a lot of progress had been achieved on all chapters of the negotiations over the past two years with the support of Eide and his team.

Although this was not the time to assign blame, Akinci said he felt at peace with his conscience “but this is not enough. We have to move forward. The fate of the Turkish Cypriots should not be to live in unjustified isolation from the rest of the world.”

Although the adviser and Akinci did not always see eye to eye, Eide said the Turkish Cypriot leader had honestly tried hard to reach a solution and had not given up on a bizonal, bicommunal federation based on EU principles.

Eide said it constantly felt like the two communities were looking for something different. It was not healthy for someone to be ‘in the waiting room’ he said in reference to the feeling of isolation felt by Turkish Cypriots.

The feeling was similar to someone at an airport waiting to fly to their destination but never reaching it, he said.

Communities should reflect on the feeling “but never give up on the dream,” Eide said adding he was convinced a solution would be reached.

Akinci wished Eide the best of luck for the elections he will run for in his native Norway and thanked him for his “balanced stance towards both communities on the island.”

Our View: State needs to move beyond ‘quick-fix’ economic solutions

SUPing your way to better balance