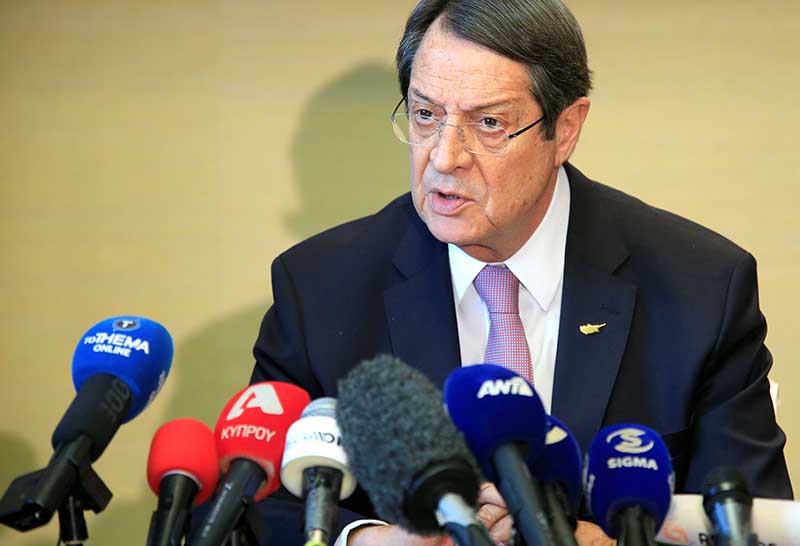 President Anastasides: we were close to a deal

President Nicos Anastasiades’ interview in a Sunday newspaper in which he said the two sides were close to reaching a settlement deal in Switzerland but this was scuppered by Turkey’s insistence on the permanent presence of 1,800 Turkish soldiers on the island, was criticised across the political spectrum on Monday.

To Diko, his comments were a confirmation of the “dangerous manner” he negotiated the Cyprus problem, while Akel, which had supported the talks, said the international community did not view their failure in the same way Anastasiades did, namely that it was all Turkey’s fault.

The government rejected the criticism, suggesting it served party and election expediencies.

In his interview with Politis, Anastasiades said he was considering writing a letter to the UN Secretary-General Antonio Guterres asking for confirmation of statements made by special adviser Espen Barth Eide that Turkey had agreed to the termination of the guarantees from the first day of a settlement.

Eide’s comments after the collapse of the talks early in July, was challenged by Anastasiades and Greek Foreign Minister Nicos Kotzias, both of whom branded the UN official a liar.

Eide blamed the collapse of the talks on a “collective failure,” while Anastasiades maintained that Turkey’s intransigence was 100 per cent to blame.

Eide said the termination of guarantees was on the cards and also rejected government claims that Guterres had misunderstood the content of a private conversation with Turkish Foreign Minister Mevlut Cavusoglu about Ankara’s willingness to ditch the guarantees from the first day of a settlement.

Anastasiades said in the interview that he was ready to return to the negotiating table “if what Mr Cavusoglu implied was true, that what Mr Eide is saying is the reality, that Turkey that is, would agree to the termination of the guarantees from day one, […], for the reduction of the Turkish troops and agree to a minimum number, and timeframe for their departure.”

He also denied charges that he was against the arrival of the prime ministers of the three guarantors – Greece, Turkey, the UK – in Crans-Montana.

“We never refused, on the contrary, we agreed with the UNSG for a brief statement to be issued, that would provide for the termination of the guarantees and the abolition of intervention rights to facilitate the arrival of the prime ministers,” he said.

The Greek Prime Minister was ready to travel to Crans-Montana as long as “our positions were satisfied and Mr Cavusoglu made clear that he meant (what he said) as to the first day of the solution”.

“I want to make clear that that was also the suggestion of the UNSG.”

But Tsipras could not travel to Crans-Montana, Anastasiades said, because neither the two other PMs would go unless an agreement was reached regarding Turkey’s intentions concerning the first day of a settlement.

“The position of all three was clear,” he said. Tsipras, he said, had spoken with both his Turkish and British counterparts.

He also said that the stumbling block on the abolition of the Treaty of Guarantee, was not on the refusal of the Greek Cypriot side to agree to the presence on the island of a Greek and of a Turkish contingent of 950 and 650 men respectively.

“I will have to reveal that the Turks wanted a military base and permanent presence of a contingent of between 1,800 and 2,000 soldiers,” Anastasiades said.

Cavusoglu, he said, had even proposed to Kotzias for Greece to do the same, since the UK already had bases on the island, but the Greek minister declined.

The president said he remained committed to the goal of liberation and reunification of the country which could be achieved through his proposals.

In its statements on Monday, Diko accused the president of accepting rotating presidency, an unspecified number of troops for an unspecified time, granting veto power to Turkish Cypriots, and the first say to the illegal users of Greek Cypriot properties in the north.

“With his insistence on his submissive policy he allowed the inclusion of all those unacceptable concessions in the UNSG framework, trapping the Greek Cypriot side in a dangerous text,” the party said.

In its criticism, main opposition Akel said Turkey was implementing a plan B, deepening partition and occupation but the administration had no response.

Government spokesman Nicos Christodoulides said parties spend their days commenting and criticising the president but their critique was not only based on false facts but was also contradictory.

Targeting Diko and parties supporting its chairman for the presidency, the spokesman challenged them to give details of their “supposed new strategy” and what form of solution they wanted to achieve.

Turning to Akel, he challenged the party to take a stance on Turkey’s position on security and guarantees, which were the reason for the collapse of the talks.

The partition of Cyprus is in sight