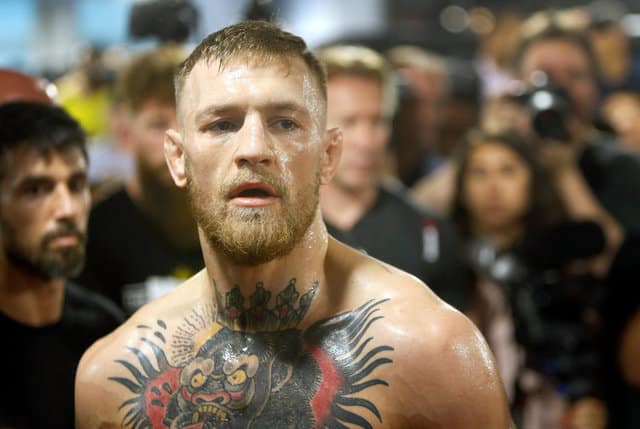 Mixed martial arts champion Conor McGregor is happy about the switch to lighter gloves for his Aug 26 fight against undefeated boxer Floyd Mayweather and says his opponent will now struggle to make it past the second round.

The Nevada State Athletic Commission on Wednesday, just 10 days before the hotly anticipated Las Vegas fight, approved requests from Mayweather and McGregor to wear eight-ounce gloves rather than 10-ounce ones.

“That was a good thing for me. I’m very happy with it,” McGregor told reporters on a conference call.

Mayweather had nearly all of his 49 professional wins using eight-ounce gloves, which may accentuate one of his advantages – his hand speed.

McGregor preferred the lighter gloves since he is used to the fingerless, four-ounce gloves typically worn in MMA.

“That’s it in a nutshell, you’ve got pros and cons on both sides,” he said. “Favours us both in certain ways.

“I believe now that the gloves are eight ounces, I don’t believe he makes it out of the second round,” McGregor added.

“Part of me … kind of wants to show some skills and dismantle him that way. (But) I do not foresee him absorbing the blows in the first two rounds.”

While most pundits have McGregor, who has never boxed professionally, as a heavy underdog, the Dubliner said he was determined to prove the doubters wrong.

“I’m just looking forward to Aug 26, going in and proving what I’m saying and educating the world on what martial arts is,” he said. “And earning my respect in this game also.”

The Irishman said his gruelling preparations for the fight would enable him to triumph no matter how the fight develops.

“There is no way in hell that I am not ready to fight in the deepest of trenches in this contest,”McGregor added.

“The training sessions and the practice that we’ve been putting in has been through hell and back. We are ready for absolutely every scenario.

“I’m ready to go to war for the full 12 rounds and I am ready to put him away in the first 10 seconds. That’s where my head’s at.”

Dana White, president of the Ultimate Fighting Championship (UFC), followed McGregor on the conference call and predicted the fight could even threaten the reported $600m haul from the Mayweather-Manny Pacquiao 2015 showdown.

“This is the biggest event ever in combat sports history. This is the most distributed event in pay-per-view history,” White said, also citing the additional digital reach.

“This thing is in like 200 countries on pay-per-view. Boxing doesn’t usually do a lot of digital. If you’re in Manhattan or on a desert island somewhere, if you have Wifi you can buy this fight.”

Messi and Ronaldo duel to be world’s best again

Van ploughs through crowd in Barcelona, killing about 12