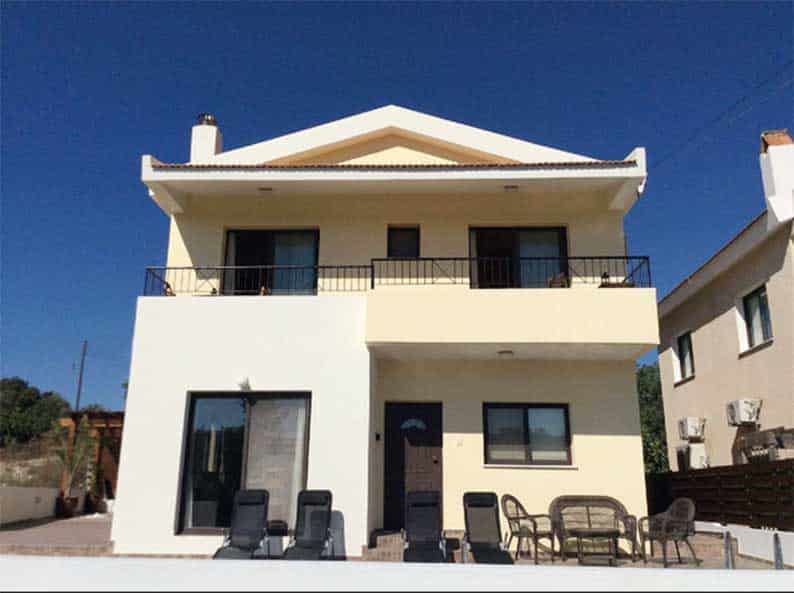 A British couple from Somerset in England is offering their Paphos villa as a prize in a raffle with 10 per cent of hoped-for receipts going to three different charities in the UK.

Villa owner Joseph Moretti said that for  £2 a ticket, entrants only have to answer a question online for a chance to win.

He and his wife Fi, want to raise £40,000 to support three charity causes; the RSPCA, the National Autistic Society and Freddy’s Fight for Life, a charity established to help a four-year-old. The couple wants to help raise the £100,000 needed for the child’s surgery in the US to remove a fibroma from his heart, according to the Somersetlive website.

On the website, Moretti said they couple had bought the Paphos villa in 2012 and have spent every summer on the island since. “We are reluctantly parting with it as we need to realise the funds for a new venture,” they say on the website.

“Instead of selling it the traditional way, we thought we would do something a bit different, and allow anyone the opportunity to own their own property in this beautiful country – whilst helping some worthy causes in the process, Moretti told Somersetlive.

He also says on the raffle website that they had chosen this method of marketing for three reasons:

the timescales involved in marketing a property abroad, the opportunity to raise additional funds for good causes and “to give anyone a serious chance of owning a villa in Cyprus!! The odds are far better than the National Lottery.”

The raffle is open until February 1, 2018 but will be moved forward if they have not met their target of £40,000 goal. They hope to sell 200,000 tickets to cover the value of the property and all associated purchase costs, such as stamp duty, land registry tax, purchaser’s legal fees,  and to complete any last minute jobs to ensure the house “is as perfect as possible for the next owner”.

No more than 200,000 tickets will be sold and the raffle will be closed at that point, according to the terms and conditions.

If the maximum number of paid entries to the Competition is not reached by the closing date, the proceeds will either be deemed sufficient to award the villa as a prize at the discretion of the promotors, or the remaining funds will be allocated as a cash prize to a winner after the deduction of any expenses plus a charitable donation of 10 per cent of funds raised.

The winner of this Competition will be chosen at random by software, from all valid entries received and verified by the promoters, and in the presence of independent witnesses and a solicitor.

The villa in the Paphos village of Kathikas is described as having three double bedrooms, three bathrooms and an open plan ground floor and a pool.

According to Somersetlive, Moretti assures the raffle is legitimate after securing legal advice.

In Cyprus, licences to raise money for charities is the responsibility of the interior ministry. However, this raffle is organised in the UK so it’s not completely clear what the implications would be in Cyprus in this particular case if someone on the island won the raffle.

Leading real estate agent Antonis Loizou told the Cyprus Mail it is not possible to raffle a house in Cyprus if the raffle was being set up in Cyprus, as a licence would not be given out. He said one person had tried it before – there was a case in 2015 – and he was simply not given a licence to do it.

Loizou said that since raffling houses is relatively new phenomenon there is not a lot of expertise on the ins and outs. “It’s a grey area,” he said.  “No one has touched it yet.”

In this case, he said the raffle is being organised in the UK under British law so he did not see implications if someone in Cyprus won the villa. “I imagine it would be ok,” he said, adding that the transfer of property would probably be made as usual at the land registry as in any property transaction as long as the required fees were paid.

For details on the raffle: http://www.winacyprusvilla.co.uk/

Size restrictions on residences are nonsensical