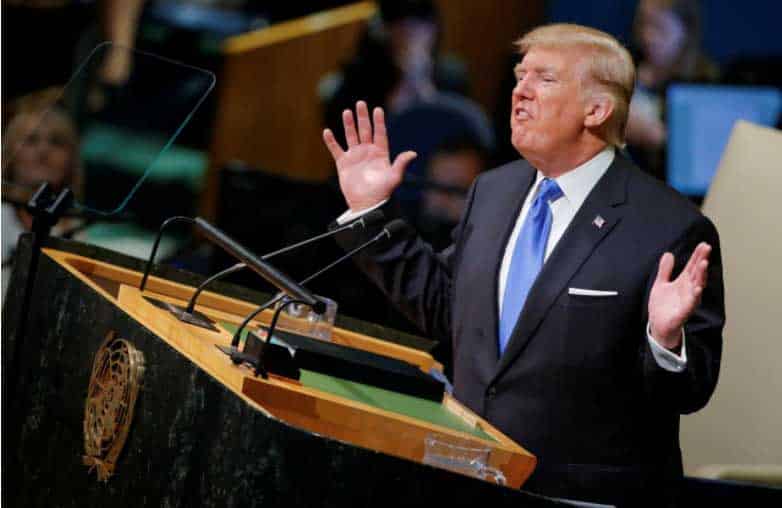 US President Trump addressing the UN earlier in the week

President Donald Trump’s opening speech at the United Nations General Assembly on Tuesday is drew widespread criticism for his aggressive statements about North Korea and Iran, but it is just as significant for what he didn’t mention at all.

In a 42-minute address that stunned many listeners, Trump called the North Korean leader Kim Jong Un “Rocket Man on a suicide mission” and vowed to “totally destroy” the country if it attacks the United States. He promised to crush “loser terrorists”. He called the Iran nuclear deal an “embarrassment” and said portions of the world are “going to hell”.

The overarching theme of Trump’s speech was sovereignty – a word he used 21 times. It was a strange emphasis in an increasingly interconnected, globalised world. Though in line with his “America first” platform, it was highly unusual for a US leader speaking in a global forum that stands for peace through cooperation. What Trump left out was just as important: he did not offset his emphasis on sovereignty – with its implication that what a nation does within its borders is of no concern to the international community – with an assertion of the primacy of universal human rights or Washington’s commitment to promoting democracy.

Indeed, Presidents Barack Obama and George W Bush, their vast ideological differences notwithstanding, sounded far more similar to each other when addressing the UN than Trump did to either of them or his other predecessors.

The three most glaring omissions were climate change, human rights and Russia’s efforts to destabilise Western democracies. Trump’s ignoring climate change was no surprise, given his rejection of climate science and planned withdrawal from the UN-sponsored Paris climate agreement. President Obama, by comparison, frequently argued for international climate cooperation in his UN speeches.

But the other subjects Trump avoided were less expected. American commitment to helping the UN advance human rights has long been a staple in UN addresses by presidents, no matter their political party. Although Trump said that he intends to work hard on an Israeli-Palestinian peace deal at a Wednesday meeting with Palestinian President Mahmoud Abbas, the fact that a settlement wasn’t mentioned during the UN address suggests the issue is no longer a White House priority.

In his UN speech, Trump also offered no direct condemnation of China or Russia, despite their recent actions that have undermined – and antagonised – the United States on the world stage.

These omissions were a stark departure from past US presidents. Though Trump’s condemnation of North Korea, Iran and Venezuela echoed Bush’s “axis of evil”, Bush’s annual UN addresses promoted the spread of democracy and nation-building abroad. Obama, meanwhile, emphasised diplomacy and international institutions to resolve conflict, achieve peace and protect human rights.

Any call for the respect of rights in Trump’s speech was reserved for nations, not people. “Our success depends on a coalition of strong and independent nations that embrace their sovereignty, to promote security, prosperity, and peace, for themselves and for the world,” he said, adding that he expects nations to “uphold these two core sovereign duties: to respect the interests of their own people and the rights of every other sovereign nation.”

For all the president’s focus on sovereignty, he ignored threats to from Russia, such as its annexation of Crimea from Ukraine, and what US intelligence agencies say was Moscow’s interference in the 2016 US presidential election and hacking of French election infrastructure.

As for China, Trump made only a vague reference to its threat in the South China Sea, where Beijing has built up islands and military outposts in an area the United States regards as international waters. Trump did, however, thank both Russia and China by name for their recent UN Security Council votes for more sanctions on North Korea. His choice of words could perhaps be interpreted as recognition of how much he will need their support facing down the Kim regime.

Trump’s only explicit mention of human rights was to condemn – without naming names – the “governments with egregious human rights records” that sit on the UN Human Rights Council. China and American allies such as Saudi Arabia and Qatar are the obvious suspects.

He did not raise the humanitarian crisis in Myanmar, where more than 420,000 Rohingya Muslims have fled to Bangladesh in what the United Nations called “a textbook example of ethnic cleansing”. Calling out Myanmar would have carried little political risk for Trump and would have gone a long way toward pressuring the country to drop its brutal campaign.

The focus on sovereignty conjured a picture of a world where every nation only looks out for itself. It is also a world where the United States abandons its role as a leader.

What Trump did not say, therefore, is just as much of a threat to human rights as what he did. He repeatedly extolled the virtues of strong nations over strong international institutions and held up the nation-state as “the best vehicle for elevating the human condition”. What’s unclear is just how this is supposed to work. His rhetoric of sovereignty gives oppressive regimes permission to violate their citizens’ rights and tells the rest of the world it’s okay to turn a blind eye.

Application for the liquidation of a company

The man who saved the world