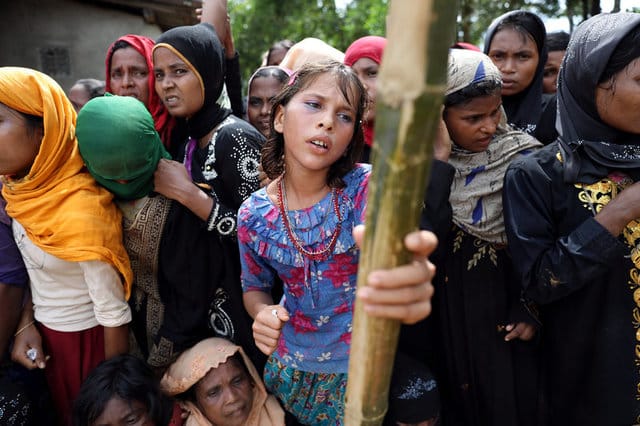 Some 515,000 Rohingya have arrived in Bangladesh from Myanmar‘s western state of Rakhine in an unrelenting movement of people that began after Myanmar security forces responded to Rohingya militant attacks with a brutal crackdown.

The United Nations has denounced the Myanmar military offensive as ethnic cleansing but Myanmar insists its forces are fighting “terrorists” who have killed civilians and burnt villages.

Rights groups say more than half of more than 400 Rohingya villages in the north of Rakhine state have been torched in a campaign by the security forces and Buddhist vigilantes to drive out Muslims.

Mark Lowcock, UN under-secretary-general for humanitarian affairs, reiterated an appeal for access to the population in northern Rakhine, saying the situation was “unacceptable”.

Buddhist-majority Myanmar has blocked most access to the area, although some agencies have offices open in towns there and the International Committee of the Red Cross is helping theMyanmar Red Cross to deliver aid.

“This flow of people of Myanmar hasn’t stopped yet. Obviously there’s into the hundreds of thousands of Rohingya still in Myanmar, and we want to be ready in case there is a further exodus,” Lowcock told a news briefing in Geneva.

Lowcock said a senior UN official was expected to visit Myanmar in the next few days.

An estimated 2,000 Rohingya are arriving in Bangladesh every day, Joel Millman of the International Organization for Migration, told a separate briefing.

Myanmar officials have said they attempted to reassure groups trying to flee to Bangladesh but could not stop people who were not citizens from leaving.

The official Myanmar News Agency said on Friday “large numbers” of Muslims were preparing to cross the border. It cited their reasons as “livelihood difficulties”, health problems, a “belief” of insecurity and fear of becoming a minority.

Aid agencies have warned of a malnutrition crisis with about 281,000 people in Bangladesh in urgent need of food, including 145,000 children under five and more than 50,000 pregnant and breastfeeding women.

Cholera is a risk, amid fears of disease spreading in the rain-drenched camps where aid workers are trying to install sanitation systems, a spokesman for the World Health Organisation said.

About 900,000 doses of cholera vaccine are due to arrive this weekend and a vaccination campaign should start on Tuesday.

UN-led aid bodies have appealed for $434 million over six months to help up to 1.2 million people – including 300,000 Rohingya already in Bangladesh before the latest crisis and 300,000 Bangladeshi villagers in so-called host communities.

The Rohingya are regarded as illegal immigrants in Myanmar and most are stateless.

Myanmar leader Aung San Suu Kyi has faced criticism for not doing more to stop the violence, although a military-drafted constitution gives her no power over the security forces.

She has condemned rights abuses and said Myanmar was ready to start a process agreed with Bangladesh in 1993 by which anyone verified as a refugee would be accepted back.

Lowcock said talks between Myanmar and Bangladesh on a repatriation plan were a useful first step.

“But there is clearly a long way to go,” he said.

Both the United States and Britain have warned Myanmar the crisis is putting at risk the progress it has made since the military began to loosen its grip on power.

China, which built close ties with Myanmar while it was under military rule and Western sanctions, has been supportive.

In Washington, US officials said sanctions and the withholding of aid were among the options available to press Myanmar to halt the violence but they had to be careful to avoid worsening the crisis.

“We don’t want to take actions that exacerbate their suffering. There is that risk in this complicated environment,” Patrick Murphy, a deputy assistant secretary of state, told a hearing of the US House of Representatives Foreign Affairs Committee.

Murphy said efforts were under way to identify those responsible for rights violations.

Cypriot lenders the least profitable in the EU, EBA says