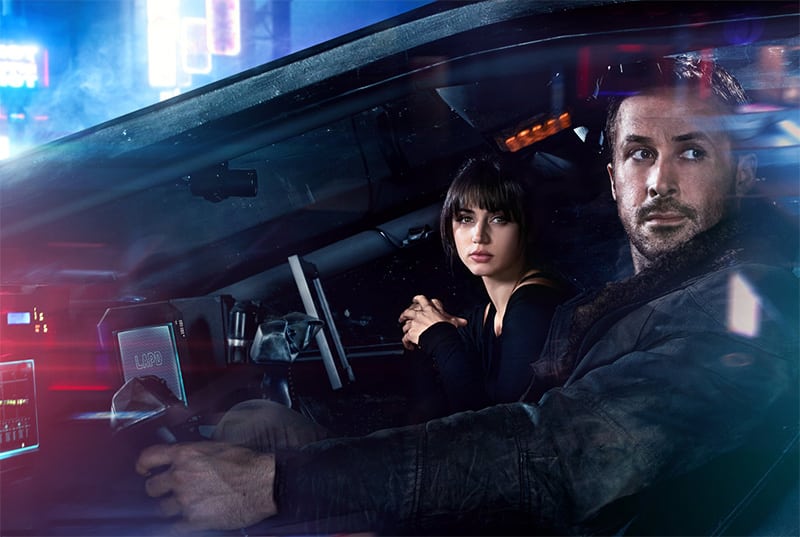 Blade Runner 2049, the first sequel to the iconic cult classic and science fiction game changer Blade Runner, opens to big expectations are running amok. With sci-fi enthusiasts having waited for this moment since 1982, the pressure is real; improving on such a groundbreaking classic would be an incredible feat. And although 2049 breaks no ground itself it is undoubtedly a work of art and one of the best sequels ever made. Androids are back and at their best!

The film works on several levels for both lovers of the original and those who think Blade Runner is a new form of roller skating. The film loosely picks up where the first left off, offering enough similarities for fans to get excited about and innovative material for novices to be intrigued by. Like the original, 2049 is a challenging portrayal of an crowded future dystopia. Its gritty, urban, futuristic realism is sombre and moody with eerie light playing through windows and unconventional pacing and plot paved to create high intrigue and suspense. The musical score works spectacularly with silence and the sharp painful sounds of a city, leaving the viewer wrought with tension throughout.

Set 30 years after the events of the first film, LAPD Officer K (Ryan Gosling) is a Blade Runner with a mission to track down and ‘retire’ out-of-date replicants (artificial humans built through genetic engineering). Being a modified virtually human replicant himself, K battles his own humanity as the discovery of long buried secret threatens to “break the world” and destroy the wall between humans and replicants according to K’s boss Lieutenant Joshi (Robin Wright). She sends K to find and crush the evidence where upon he encounters Niander Wallace, Jared Leto (food crisis saviour and creator of replicants obedient to humans) and his brutal (yet wonderfully performed) right hand woman Luv (Sylvia Hoeks). Along the way, K begins to question his own identity and memories of his past and leads him on a quest to find Rick Deckard (Harrison Ford), a former LAPD blade runner who has been missing for 30 years.

Director Denis Villeneuve shuffles well-timed action and themes, dropping in nuggets of information seamlessly. Each scene is packed with so many small touches that I found myself holding my breath so I wouldn’t miss a thing. It is full of interesting sci-fi concepts including flying cars with detachable drones and 2D Siri like romantic lovers which sync with humans to experience sex. One of the main standout features of the original was the look of the film and this movie certainly pays homage to Ridley Scott’s Blade Runner with its midnight blue lights in a decrepit Los Angeles soaked in constant downpours. With ash grays, toxic reds and jaundice yellows, a blighted future is ever present.

However, is it right to compare a film to its prequel released 35 years earlier? Especially when the original was a cutting-edge cinematic experience which became the basis of sci-fi movies for the decade to follow? Plus, 35 years in today’s world of films has seen incredible transformations to graphics, sounds and locations etc. Yet, to some extent yes, comparison is important, especially when the original was set in the not to distant future of our own reality 2019. And how accurate or abstract were 1982’s predictions of our near now? Frighteningly, not so off the mark at times. While we’re were not exactly living in the world that Blade Runner projected, many themes are relevant today: increasing constrictions on our freedom and a world which is highly dependent on artificial intelligence. Consequently, although the film looks CGI loaded, compared to other sci-fi films today, it’s not. Also, is 2049 a relatable future prediction considering our current global predicaments? Over population, global warming (with the movie’s perpetual rainfall) and obsession with digitised sexual fantasies… time will tell.

The film not only deeply entertains but also makes you think; it is rich in visuals, storyline, acting, style and everything that makes a film exceptional. Gosling nails the character, an expert of understated acting, communicating deep emotions and thoughts with minimal effort, providing human warmth in a cold world. Ford’s performance arguably was one of the best in years; solid, intense and with a deep commitment to his character’s story. It’s thematically complex and an impressive filmmaking achievement all around.

At two hours and 43 minutes long, the movie manages to maintain a thrilling intensity throughout; a must experience.

(Slap)stick it to the man