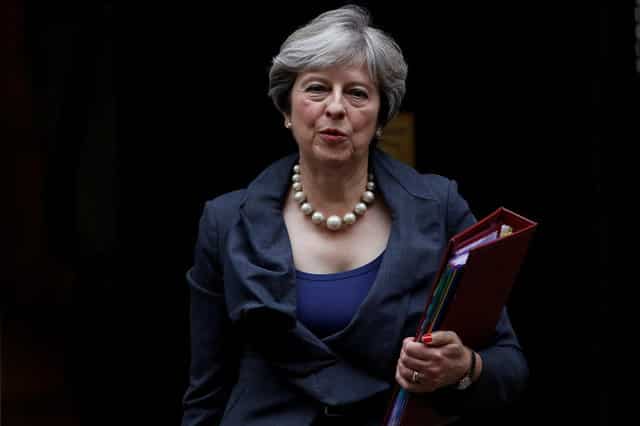 EU governments wrangled on Friday over a goodwill gesture to Theresa May that some hope might break deadlock in Brexit talks but others fear may let Britain dodge demands for tens of billions of euros.

The British prime minister indicated she too might make a move at next week’s Brussels summit. A spokeswoman said “there will be more to say there” on a promise May made last month to honour financial commitments when Britain leaves.

But Germany was leading a hardline camp wary of a proposal by summit chair Donald Tusk to tell May next week that the EU will start internal work on a post-Brexit transition plan despite her failure so far to spell out exactly what London is ready to pay in a divorce settlement which Brussels puts at roughly 60 billion euros ($70 billion).

“This is a very big gesture towards Britain, maybe way too big,” a senior EU diplomat said ahead of an evening meeting of envoys from the 27 remaining states to discuss Tusk’s draft for a statement to made after leaders meet in a week’s time.

“Time is running out”, German Chancellor Angela Merkel’s spokesman warned after week of stalemate in negotiations and faction-fighting within May’s government that have raised concerns that talks could collapse, leaving Britain bumping out into legal limbo in March 2019.

Businesses planning investment decisions are calling for a clear idea by the new year of how the split and subsequent years of transition to a new trade relationship will function. Otherwise, some firms say, they may assume a disruptive “hard Brexit” and move some operations to continental Europe.

As the process approaches the half-way stage between last June’s shock referendum vote for Brexit and Britain’s departure on March 30, 2019, tensions are building not just between the two negotiating sides but also within the bloc of 27, despite a strong sense that sticking to a common line is a major advantage for every state, whatever their differing national interests.

While hardliners would prefer less or no talk of a future after Brexit and more about demanding money, others are keen to give May, beleaguered at home, something to show for the effort to compromise she displayed in a speech at Florence last month.

One diplomat called the draft a “search and rescue mission” to help the British premier out of a jam. Another said it was a bid to break “stalemate” and avert “disaster” over the winter:

“Some states were not very happy about this but what else can we do?” the diplomat added. “We are trying to reach out.

“They must come up with something on the money.”

Lead powers Germany and France were coordinating, diplomats said, to limit any watering down of the EU position that its negotiator, Michel Barnier, cannot so much as mention to his British counterparts what might come after Brexit until leaders deem there has been “sufficient progress” on three issues the EU says must be settled in a treaty signed before Britain leaves.

These are the rights of EU citizens in Britain, Northern Ireland’s new EU border and the intractable “Brexit bill”.

Tusk, who met Merkel and French President Emmanuel Macron in a week when he has spoken to almost all other EU leaders including May, offered a draft text saying there is not enough progress but welcoming the advances there have been and flagging a hope that the next summit in December could open trade talks.

And in its strongest conclusion, it proposes that Barnier start working out internally – without negotiating with London – what will happen after Brexit. Barnier himself has sought flexibility to break the deadlock, diplomats say.

“If this is the concession May needs to be able to make a move on financial settlement, let’s try it,” said a diplomat from one of Britain’s close EU trading partners. “She is so weak at the moment she can do nothing. And we need the money.”

Despite protestations of unity, some diplomats detect nuance in approaches to the prospect of talks collapsing, with those countries with most to lose from trade barriers with Britain most anxious to avert a meltdown. Essentially that means its near neighbours like the Nordic states, the Netherlands and Ireland.

“Who stays awake at night?” said one diplomat noting the fears of those with most to lose if talks collapse and hard Brexit becomes reality. “A lot of member states don’t any more.”

France and Germany, keen to press on with post-Brexit EU reforms following elections this year, have stepped up their contingency planning for a no deal scenario.

Abortion doctor is released as push to change law intensifies

A dialogue of the world on canvas