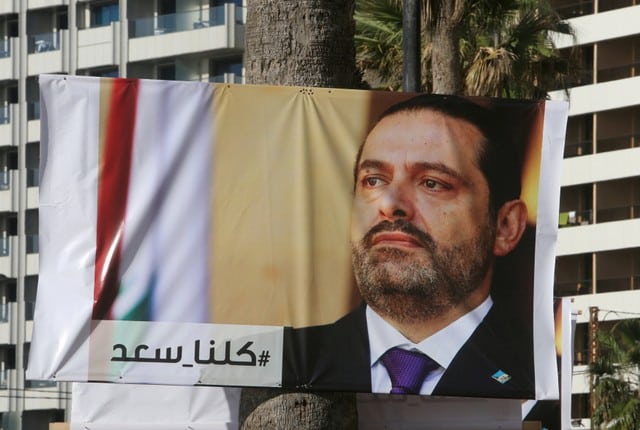 A poster depicting Lebanon's Prime Minister Saad al-Hariri, who has resigned from his post, is seen in Beirut

Lebanese President Michel Aoun said on Monday he was pleased by Saad al-Hariri’s comment that he would return to Lebanon soon to discuss his resignation as prime minister, presidential palace sources said.

In separate remarks relayed by visitors to him, Aoun gave a positive assessment of comments Hariri made in an interview on Sunday, his first since his shock decision to quit delivered from Riyadh on Nov. 4.

“President Aoun expressed his pleasure at Hariri’s announcement of his return to Lebanon soon,” a source said. “Rescinding his resignation is one of his options”, Aoun was quoted as saying of Hariri.

Hariri’s resignation has pitched Lebanon into a deep political crisis and shaken confidence in its heavily indebted state.

The move — which has still to be accepted by Aoun — thrust Lebanon back into the forefront of the regional tussle between Sunni-led Saudi Arabia and the Shi’ite Islamist government of Iran.

Saudi-allied Hariri said in the interview he would return to Lebanon within days, and he held out the possibility he could rescind his resignation if Iran-backed Hezbollah agreed to stay out of regional conflicts such as Yemen.

Hezbollah is part of the coalition government led by Hariri, who resigned saying that he feared assassination. His father Rafic Hariri, who was also a prime minister, was assassinated in 2005.

Hariri also accused Iran and Hezbollah of sowing strife in the Arab world.

Lebanese government officials and senior sources close to Hariri believe Saudi Arabia coerced him into quitting and has put him under effective house arrest since he flew to Saudi Arabia on Nov 3.

Saudi Arabia denies this, and Hariri said during his interview on Sunday that he was a free man.

Riyadh subsequently accused Lebanon of declaring war on it because of Hezbollah.

The United States and other Western powers have however struck a different tone to Riyadh, affirming their backing for Hariri and the Lebanese state even though they too regard Hezbollah as a terrorist organisation.

Aoun said on Sunday that Hariri’s movements were being restricted in Riyadh, the first time the Lebanese authorities had publicly declared their belief that Saudi Arabia is holding him against his will.

Prior to Hariri’s interview, Aoun had also said that the restrictions on his freedom threw doubt on anything Hariri had said or would say, and that his statements could not be considered a statement of free will.

However on Monday, Aoun said that Hariri was “leaving all doors open including rescinding his resignation”, according to the visitors, who declined to be identified because they were discussing closed-door conversations with Aoun.

The “diplomatic and national campaign” to secure Hariri’s return had brought positive results, they said. Aoun has been convening high-level meetings with Lebanese politicians and foreign diplomats since Hariri stepped down.

Aoun had refused to accept Hariri’s resignation unless he tenders it in person in Lebanon.

Hariri’s comments however encouraged a recovery on Monday in Lebanese dollar bonds, which slumped last week.

The Iranian foreign ministry said on Monday that Hariri’s comments gave hope that he would soon return to Lebanon.

School board woman ‘was not accomplice’ in abuse case (Updated)

Women warned over risk of diabetes during pregnancy