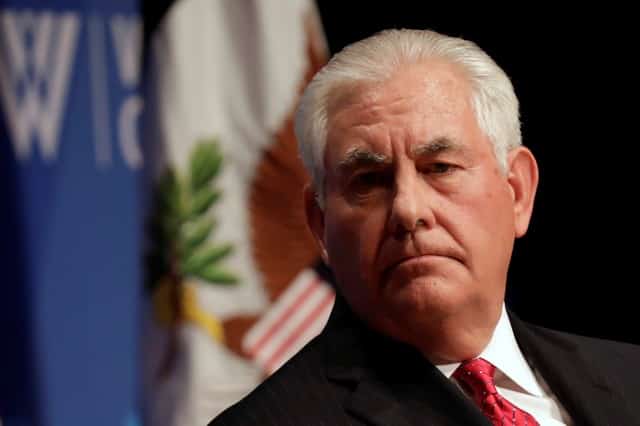 US President Donald Trump is considering a plan to oust Secretary of State Rex Tillerson, who has had a strained relationship with his boss over North Korea and other issues, senior administration officials said on Thursday.

Tillerson would be replaced by CIA Director Mike Pompeo, known as a Trump loyalist and foreign policy hard-liner, within weeks under a White House plan to carry out the most significant staff shake-up so far of the Trump administration.

Republican Senator Tom Cotton, one of Trump’s staunchest defenders in Congress, would be tapped to replace Pompeo at the Central Intelligence Agency, the officials told Reuters, speaking on condition of anonymity.

It was not immediately clear whether Trump had given final approval to the latest staff shake-up, but one of the officials said the president asked for the plan to be put together.

Tillerson‘s long-rumored departure would end a troubled tenure for the former Exxon Mobil Corp chief executive, who has been increasingly at odds with Trump over policy challenges such as North Korea and under fire for his planned cuts at the State Department.

Tillerson was reported in October to have privately called Trump a “moron,” something which the secretary of state sought to dismiss.

That followed a tweet by Trump a few days earlier that Tillerson should not waste his time by seeking negotiations with North Korea over its nuclear and missile program, widely seen as a sign of how the secretary of state had become marginalised.

Trump has soured on Tillerson mostly because of the “moron” report, the softer line that America’s top diplomat has taken on North Korea, and differences over the Gulf crisis involving Qatar, one senior U.S. official said.

Trump asked John Kelly, the White House chief of staff, to develop the transition strategy, and it has already been discussed with other officials, one administration source said.

Under the plan, which has been in the works for weeks and was first reported by the New York Times, the staff reshuffle would happen around the end of the year or shortly afterward, the official said.

Asked during a White House meeting on Thursday with the crown prince of Bahrain whether he wanted Tillerson to remain in his job, Trump sidestepped the question, telling reporters: “He’s here. Rex is here.”

“There are no personnel announcements at this time,” White House spokeswoman Sarah Sanders later said in a statement. “Secretary Tillerson continues to lead the State Department.”

Tillerson‘s departure has been widely rumored for months, with attention focused on Nikki Haley, U.S. ambassador to the United Nations, as his likely replacement.

But Pompeo, a former congressman, has increasingly moved to the forefront as he has gained Trump’s trust on national security matters.

Tillerson, 65, has spent much of his tenure trying to smooth the rough edges of Trump’s unilateralist “America First” foreign policy, with limited success. On several occasions, the president publicly undercut his diplomatic initiatives.

A source familiar with Tillerson’s thinking said the secretary of state’s original plan when he took the job as top US diplomat was to leave in February.

“His plan was to make it a year and then find a reason to leave. Who knows if that still holds?” the source said.

Senator Bob Corker, a senior voice on foreign policy, spoke to Tillerson on Thursday and said the secretary of state was unaware of any plans to oust him.

If carried out, the staff changes would be the latest in a string of departures and firings in Trump’s administration in recent months, including his chief of staff, national security adviser and FBI director.

“There’s so much churn. It feels like whiplash,” a State Department official said.

Pompeo, 53, who has taken tough foreign policy stands, especially on Iran, has publicly talked about how the spy agency is becoming more aggressive and how he has been focusing on deploying more CIA officers overseas.

He has offered effusive praise for Trump in interviews and speeches despite the president’s public criticism of US intelligence agencies and his dismissal of the finding by some of them that Russia conducted an influence campaign to boost Trump over his Democratic rival, Hillary Clinton, in the 2016 election.

Pompeo also has downplayed the extent of Russia’s intervention, saying Moscow has sought to influence US elections for decades.

While Trump has expressed deep skepticism of the US intelligence community – he once compared its behavior to that of Nazi Germany – Pompeo has called the president an “avid consumer” of intelligence who is grateful to intelligence professionals.

Tillerson has at times put distance between himself and Trump’s positions.

At a private dinner of foreign policy veterans last month, A senior White House official criticised Tillerson for failing to support the president’s agenda, according to a person familiar with the matter.

Tillerson joined Defense Secretary Jim Mattis in pressing a skeptical Trump not to pull the United States out of an agreement with Iran and world powers over Tehran’s nuclear capabilities.

Tillerson has taken a more hawkish view than Trump on Russia and tried to mediate a dispute among key US Mideast allies, after four Arab nations launched a boycott of Qatar, alleging Islamist extremist ties.

In late September, while on a trip to Beijing, Tillerson said Washington was probing North Korea to see whether it was interested in dialogue, and had multiple direct channels of communication with Pyongyang.

The next day, Trump appeared to dismiss those efforts in a tweet, telling Tillerson he was “wasting his time” trying to negotiate with North Korea.

Tensions have also run high between Tillerson and veteran diplomats who oppose his proposed staff and budget cuts and in some cases have privately accused him of hollowing out the State Department.

His tenure has coincided with the departure of dozens of veteran foreign policy hands, and many of the State Department’s senior policymaking positions remain unfilled.