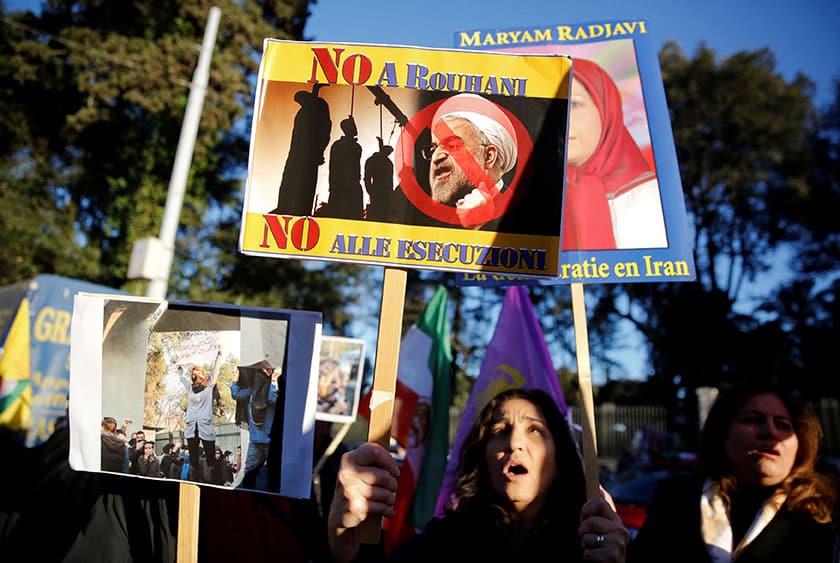 Iran’s elite Revolutionary Guards have deployed forces to three provinces to put down anti-government unrest after six days of protests that have rattled the clerical leadership and left 21 people dead.

The protests, which began last week over economic hardships suffered by the young and working class, have evolved into a rising against the powers and privileges of a remote elite, especially supreme leader Ayatollah Ali Khamenei.

The unrest continued to draw sharply varied responses internationally, with Europeans expressing unease at the delighted reaction by U.S. and Israeli leaders to the display of opposition to Iran’s clerical establishment.

Defying threats from the judiciary of execution if convicted of rioting, protests resumed after nightfall with hundreds hitting the streets of Malayer in Hamadan province chanting: “People are begging, the supreme leader is acting like God!”

Videos carried by social media showed protesters in the northern town of Nowshahr shouting “death to the dictator”.

In a sign of official concern about the resilience of the protests, the Revolutionary Guards commander, Major General Mohammad Ali Jafari, said he had dispatched forces to Hamadan, Isfahan and Lorestan provinces to tackle “the new sedition”.

Most of the casualties among protesters have occurred in those regions of the sprawling Islamic Republic.

The Revolutionary Guards, the sword and shield of Iran’s Shi’ite theocracy, were instrumental in suppressing an uprising over alleged election fraud in 2009 in which dozens of mainly middle-class protesters were killed. Khamenei condemned that unrest as “sedition”.

In Washington, a senior Trump administration official said the United States aimed to collect “actionable information” that could allow it to pursue sanctions against Iranian individuals and organisations involved in the crackdown.

But in Paris, President Emmanuel Macron said the tone of comments from the United States, Israel and Saudi Arabia was “almost one that would lead us to war … a deliberate strategy for some,” and stressed the importance of keeping a dialogue with Tehran.

“What we urgently advise against is the attempt to abuse this internal Iranian conflict … internationally. That is not going to ease the situation any way,” he said.

In a state-sponsored show of force aimed at countering the outpouring of dissent, thousands of Iranians took part in pro-government rallies in several cities on Wednesday morning.

Pro-government marchers chanted: “The blood in our veins is a gift to our leader (Khamenei),” and: “We will not leave our leader alone.” They accused the United States, Israel and Britain of inciting protests, shouting, “The seditionist rioters should be executed!”

On Tuesday, the 78-year-old Khamenei had accused Iran’s adversaries of fomenting the protests.

U.S. President Donald Trump, who has sought to isolate the Tehran leadership, reversing the conciliatory approach of predecessor Barack Obama, said Washington would throw its support behind the protesters at a suitable time.

“Such respect for the people of Iran as they try to take back their corrupt government. You will see great support from the United States at the appropriate time!” Trump wrote in the latest of a series of tweets on Iran’s turmoil.

In contrast, the leader of Lebanon’s Iran-backed Hezbollah group, Sayyed Hassan Nasrallah, played down the protests as economic discontent, saying they were not rooted in the political issues which spurred huge numbers to demonstrate in 2009 and would end soon.

He described them as “nothing to worry about”.

The protests seem to be spontaneous, without a clear leader, cropping up in working-class neighbourhoods and smaller cities, but the movement seems to be gaining traction among the educated middle class and activists who took part in the 2009 protests.

More than 100 Iranian woman activists voiced support for a new uprising in a statement on Wednesday. Several prominent Iranian lawyers, including Nobel Peace Prize laureate Shirin Ebadi, urged Tehran to respect people’s right to freedom of assembly and expression, guaranteed under the constitution.

Some labour unions as well as minority Kurdish opposition groups have also thrown their weight behind the protests.

In Geneva, the U.N. human rights chief urged Iran to rein in security forces to avoid further violence and respect the right to peaceful assembly.

Hamidreza Abolhassani, a regional judicial official, said a European citizen had been arrested for leading rioters in the Borujerd area of western Iran and was suspected of having been “trained by European intelligence services”. The detainee’s nationality was not given.

The protests have heaped pressure on President Hassan Rouhani, a relative moderate who championed a deal struck with world powers in 2015 to curb Iran’s disputed nuclear programme in return for the lifting of most international sanctions.

Many of the protesters are fuming over what they see as the failure so far of Rouhani’s government to deliver on promises of more jobs and investment as a dividend of the nuclear accord.

Anger over economic stagnation and reputed graft within the clerical and security hierarchies has been building since last month. Thousands joined a hashtag campaign on Twitter and other sites to vent frustration over the dragging pace of reforms to tackle high unemployment and grant more social freedoms.

Khamenei and Rouhani have vowed to crack down on high-level corruption and create economic prosperity for all Iranians.

But there have been few changes. The Revolutionary Guards, for example, still control a vast, lucrative economic empire.

While more than 20 million out of 80 million Iranians live below the poverty line, the wealthy, including relatives of government officials, import tens of thousands of luxury cars every year.

Trump must decide by mid-January whether to continue waiving U.S. sanctions on Iran’s oil exports under terms of the nuclear deal he opposed. But if re-imposes sanctions, he risks worsening the economic pain of Iranians he has vowed to help.

“If the Americans’ sympathy with Iranians were real, they would have not imposed cruel sanctions on the our nation,” Jafari, the Revolutionary Guards commander, said on Wednesday.