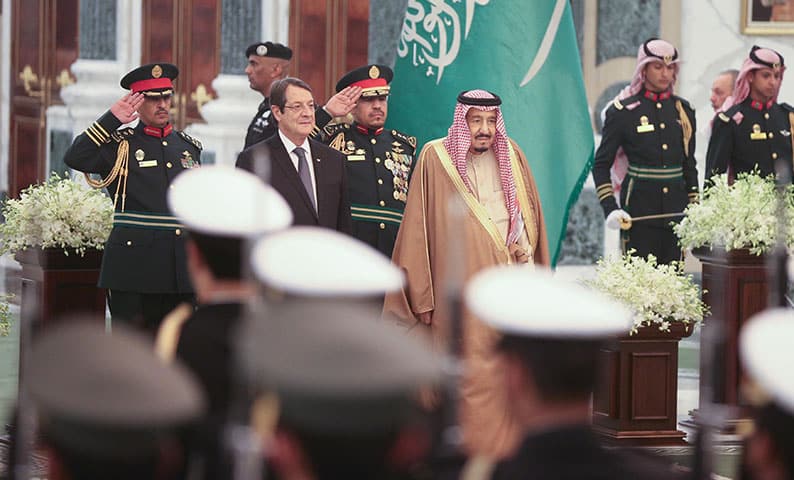 President Nicos Anastasiades said on Thursday that statements he made earlier in the week on Turkey’s threats concerning Cyprus’ exclusive economic zone (EEZ) had been deliberately distorted by some for their own ulterior motives.

The opposition on Wednesday pounced on statements Anastasiades had made the previous day appearing to assign a separate EEZ to the Turkish Cypriots.

The government put the roasting down to electioneering, and said the other parties were well aware of what the president had meant. But Anastasiades, who was away on an official visit to Saudi Arabia and unable to respond, decided to set the record straight when he arrived back on the island on Thursday.
“During my official visit to Saudi Arabia I found that some in Cyprus, apparently serving expediencies, distorted and deliberately misinterpreted my statement about Turkey’s threats against our sovereign rights,” Anastasiades said.

He added that his Tuesday statement was in two parts – the first was on the standing positions of the Republic of Cyprus and his own, and the second was on Turkey’s positions.

More specifically, Anastasiades said, “I mentioned – verbatim – that the government, and the Republic of Cyprus, face no threat given that it exerts its sovereign rights, successfully.”

The country’s natural wealth, he said, belongs to all its legitimate inhabitants, including Turkish Cypriots, therefore any threats by Turkey work against the entire Cypriot people.

“I would like to hope that Turkey will understand that the peaceful drilling, currently underway, concerns the future of Cyprus and its people, all of its people, and consequently questioning our sovereign rights, simply because Turkey does not recognise the Republic of Cyprus or because it believes that the self-styled regime in occupied Cyprus actually exists, has no actual standing.”
“To highlight the Turkish contradiction and hypocrisy, I said in an example: If they (Turkey) choose to protect the rights of the Turkish Cypriots in a separate independent entity, then they have to limit this protection to the rights of this illegal entity,” Anastasiades said.

“I had added that this is Turkey’s position saying verbatim ‘But this is a theory that concerns only Turks and not us’,” he said.

He added that it is not his intention to engage in any confrontation with anyone, ‘even if some are seeking it’.

Anastasiades also said that some have tried ‘with unsubstantiated claims to reduce the historic importance of the first visit of the President of the Republic of Cyprus to Saudi Arabia and what has been achieved’.

The president’s explanation rather rocked the boat even more as opposition parties insisted on their initial positions that Anastasiades’ statement was ‘dangerous’, ‘provocative’ and has given legitimacy to the breakaway regime.

Independent presidential candidate Stavros Malas said on Thursday, that Anastasiades, ‘instead of offering an apology for a dangerous position he voiced, continues attempts to justify the unjustified’.
With this position, Malas said, Anastasiades legitimises the illegality and divides the EEZ.

“President Anastasiades has no right to raise rhetorical questions and answer them in a way that puts the Republic of Cyprus into dangerous and destructive adventures,” Malas said.

Diko accused Anastasiades of ‘predetermined concessions’ which do not allow him to retract his earlier statement. The party said it is obvious that if Anastasiades is re-elected he will accept the partition of the RoC’s EEZ and the continued presence of Turkish troops in Cyprus after a settlement solution with a revision clause.

Constantinos Zenios, spokesman for the head of the Citizens’ Alliance and presidential candidate Giorgos Lillikas, said it is dangerous for the national issue for Anastasiades to make statements that could be misinterpreted within or outside Cyprus. He urged the president to convene the national council to jointly discuss preventative reaction measures.

The Solidarity Movement was also not convinced and said that Anastasiades ought to retract his statement instead of talking about misinterpretation of what he said.

Professor Christodoulos Yiallourides, whose name was published in the list of personalities that support the nomination of Anastasiades, announced that he had withdrawn his support for the incumbent and urged Cypriots to support the candidate they feel will respect the survival position of Cypriot Hellenism.