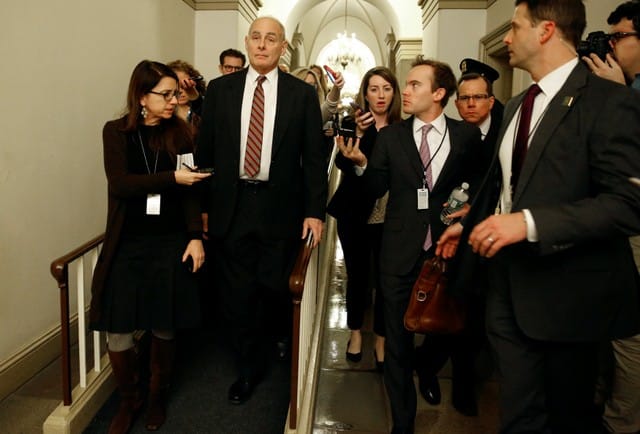 The White House on Wednesday threw its support behind a Republican proposal to avert a government shutdown at week’s end with a one-month extension in funding, but it was unclear whether there were enough votes to pass it in Congress.

Congress has been struggling for months to reach an agreement to fund the government, which is currently operating on its third temporary funding extension since the 2018 fiscal year began on Oct. 1. The latest measure expires on Friday.

Agreement on a spending bill has been complicated by a Democratic push to include a deal on the status of “Dreamers” – young adults brought to the country illegally as children. But there are also disagreements over how to proceed within the Republican Party, which holds majorities in both the Senate and House of Representatives.

Republican leaders in Congress turned to another short-term spending bill, which they want to pass and send to President Donald Trump’s desk by Friday, as hopes for an immigration agreement with the White House ebbed.

Senate Majority Leader Mitch McConnell said the Senate would take up the bill as soon as the House approves it.

He was still waiting to find out what Trump would support on immigration. “He has not yet indicated what measure he is willing to sign,” McConnell said.

The White House promised to engage in immigration negotiations next week if Democrats support the stop-gap measure. The talks come after Trump ordered the Deferred Action for Childhood Arrivals (DACA) program to expire in March. He asked Congress to instead come up with a legislative fix for the Dreamers, who received protection from deportation under Democratic President Barack Obama.

“Let’s make a budget deal by Friday and let’s come back to work aggressively on Monday and make a deal on DACA and responsible immigration reform,” Sanders said.

Trump told Reuters in an interview on Wednesday that he rejected a bipartisan Senate deal on immigration last week negotiated by Republican Senator Lindsey Graham and Democratic Senator Dick Durbin because it took him “30 seconds” to realize it was a “horrible” deal.

“I was told that we had a deal – and the deal was an unacceptable deal. This was a deal that was unacceptable from the moment they started reading the provisions of the deal,” Trump said.

Following the break down in negotiations, the White House on Wednesday dispatched chief of staff John Kelly and legislative liaison Marc Short to Capitol Hill.

Kelly met with the Congressional Hispanic Caucus in a meeting lawmakers described as cordial but revealed the two sides were as far apart as ever. Senator Bob Menendez said the White House is making demands on immigration that go far beyond the scope of border security or the DACA program that would shield Dreamers from deportation.

Menendez said he hoped it was clear to Kelly that “they’re going to have to come more to the center if they truly want a fix.”

After a Wednesday meeting with House and Senate leadership from both parties, Short expressed concern that a bipartisan House bill to give Dreamers legal protections, put them on a pathway to citizenship and provide additional funding for border security was too broad in terms of which young immigrants it would cover.

“There’s still a lot to do,” Short said.

Graham, meanwhile, announced in his statement that his bipartisan deal, though already rejected by Trump, had picked up support from four more Republican senators, bringing the total to seven.

Republicans hold a slim 51-49 majority in the Senate and most legislation requires 60 votes for passage.

While the stop-gap funding measure backed by Republican leaders does not include a legislative shield for Dreamers, it does grant Democrats an unrelated, high-priority measure: a six-year reauthorization of the Children’s Health Insurance Program (CHIP).

Still, Senate Democratic Leader Chuck Schumer dismissed the Republican stopgap proposal as “a loser” that does not help veterans, opioid addicts and retirees or meet defense needs. He said an “overwhelming number” of Democratic senators do not support it.

“We don’t know whether the House will send us this bill, but the revulsion towards that bill was broad and strong,” Schumer said.

Durbin, the No. 2 Senate Democrat, told reporters he was personally “fed up” with short-term funding measures and would not vote for it.

“We’re 119 days into this fiscal year and we’re on our fourth CR (continuing resolution) and no end in sight,” Durbin said.

Graham said he too would not vote for another stopgap measure. “Enough is enough,” he said.

It was also unclear whether members of the conservative House Freedom Caucus would back the plan. The group’s leader, Representative Mark Meadows, said that while members dislike the short-term deal and would prefer added defense funding, the chances for a shutdown “are very unlikely because no one wants one.”

“I think cool heads hopefully will prevail on this,” he said.

Zaatar goes all out