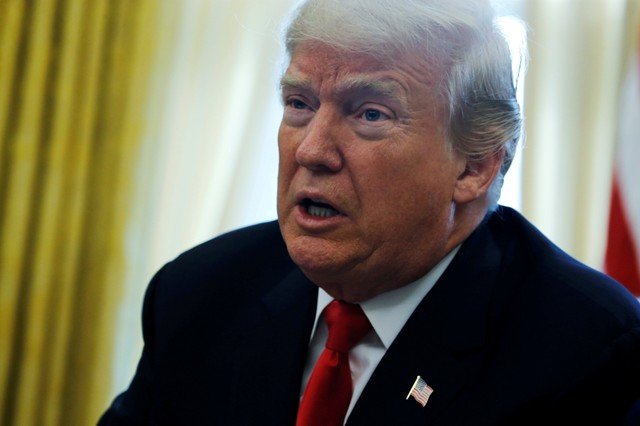 US President Donald Trump said he had not intended to cause offence in Britain by sharing anti-Muslim videos originally posted by a leader of a far-right fringe group and that he would apologise if such people were horrible racists.

Trump told ITV’s Good Morning Britain show he knew nothing about the group but that he was the “least racist person that anybody’s going to meet” and that his retweet was not an endorsement.

Trump sparked outrage in Britain when he shared the anti-Muslim videos last November and became embroiled in a public spat with British PM Theresa May who criticised him for the retweet.

When pressed on whether he would apologise for his retweet, Trump said that if the group was made up of racists then he would.

“Here’s what’s fair, if you’re telling me they’re horrible people, horrible racist people I would certainly apologise if you would like me to do that,” Trump said.

Jayda Fransen, deputy leader of anti-immigration Britain First, posted the videos which she said showed a group of people who were Muslims beating a teenage boy to death, battering a boy on crutches and destroying a Christian statue.

But relations between the two nations, described as “the special relationship”, have faced several ups and downs not just due to Trump‘s criticism of May, but also his spats with London Mayor Sadiq Khan and his comments on militant attacks in Britain.

Earlier this month, he cancelled a trip to London to open a new embassy, saying he did not want to endorse a bad deal agreed by the Obama administration to sell the old one for “peanuts”.

Some Britons are angry at the prospect of a visit by Trump with large protests expected when he does arrive, most probably in the second half of the year according to a senior British government source.

Officials are discussing whether Trump will be given a state visit, which means he will be hosted by Queen Elizabeth, and when exactly it will take place, the source said.

In the interview aired on Friday, Trump said he loved Britain very much and got along well with May.