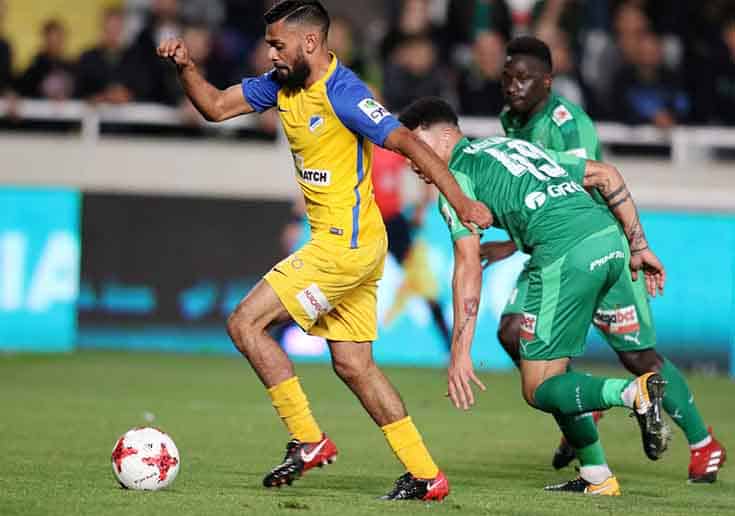 Apoel beat Omonia 3-1 in the first half this season

The Nicosia derby between Apoel and Omonia stands out in the penultimate round of the regular season this weekend, while Apoel-chasers Apollon, Anorthosis and AEK, all have seemingly easy home ties against relegated Ethnikos Achnas, Alki and Ermis Aradippou, respectively.

At the bottom end of the table, Nea Salamina travel to Limassol to face European hopefuls AEL, while the game that may decide which team follows Ethnikos in the automatic drop zone between Aris and Olympiakos has been put off until Wednesday due to the Limassol carnival.

In the not so distant past the Nicosia derby between arch rivals Apoel and Omonia would attract more than 15,000 supporters, with the game’s outcome almost impossible to predict.

In the past five years however, Apoel pulled well clear of their rivals and have dominated this fixture, having not lost in their last 20 games and recording 14 wins in the process. However, their spokesperson Nectarios Petevinos was quick to point out that past results account for nothing and every game is different.

Apoel head into the game on the back of a difficult away win against Pafos FC where they could have dropped points as a result of sloppy defending.

As a result, coach Giorgos Donis is expected to restore Carlao at the heart of the defence despite his lengthy absence due to injury. The only other question mark is who will lead the line with Brazilian Guilherme Delattorre having the edge over Mikael Pote and Igor de Camargo.

Omonia have been a transformed team since Ivaylo Petev took charge over a couple of months ago, losing just once to Apollon and recording seven wins in nine games.

However, they will have to put behind them their shock midweek first-leg home loss to Doxa Katokopias in the cup where the Nicosia team were guilty of poor defending in a lacklustre performance reminiscent of the pre-Petev period.

Petev was sent off in the cup game and will have to watch his team from the stands against Apoel probably alongside Demetris Christophi, who finished the cup game at a walking pace having sustained a groin strain late on in the match.

Matt Derbyshire and Fanos Katelaris are also in doubt through injury but likely to be given the green light for the game. Omonia’s third choice goalkeeper, young Cypriot Andreas Christodoulou, will be making another rare start as their other two other goalkeepers are still sidelined through injury.

Apollon were also stunned in the cup, losing to second division side Othellos Athienou and coach Sofronis Avgousti will be looking for his team to bounce back at home to Alki.

AEK, despite being without four players that are usually in the starting eleven, should prove too strong against the relegated Ethnikos Achnas, while Anorthosis will have to work hard for the three points against a vastly improved Ermis Aradippou.

An exciting game is also expected at the Tsireion where AEL take on Nea Salamina with both sides desperate for three points for different reasons though.

AEL cannot afford to drop any more points as Omonia is just a point behind them while their opponents need the points to steer clear of the relegation zone.

Doxa have steered well clear of the relegation zone this season and with the return leg against Omonia in mind their coach Loukas Hadjiloucas may decide to rest a few players giving an advantage to Pafos FC.