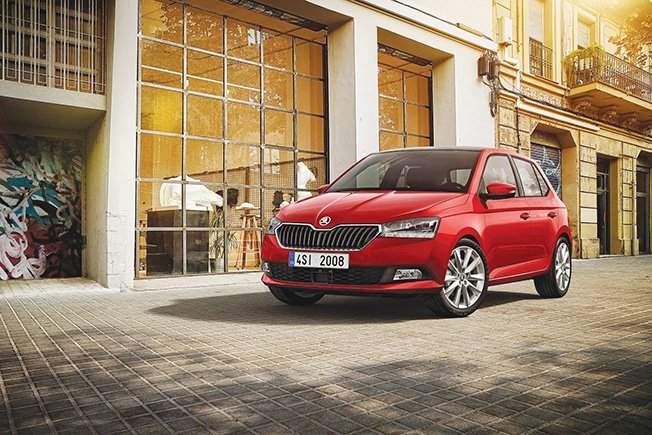 The Fabia plays a key role in the Czech carmaker’s current model range. Since 1999, over four million Fabias have been sold worldwide

The SKODA Fabia is embarking on its next chapter with “wide-ranging enhancements” in terms of both design and technology.

The Czech manufacturer says its popular small car will now boast restyled front and rear sections, including the introduction of LED lights, as well as a ‘refined’ interior. The revised model will be unveiled at the Geneva International Motor Show in March, with the market launch scheduled for the second half of 2018.

The front and rear design updates, according to SKODA, produce “a high-class appearance”, while new outlines for the headlights and front fog lights, along with ‘state-of-the-art lighting technology’ also freshen up the look. LED headlights and rear lights are now being offered on the Fabia for the first time, while the choice of alloy wheels has also been extended to include the addition of 18-inch wheels for the hatchback.

Inside, there’s a redesigned instrument cluster, new trim strips for the dashboard and two-tone finishes on the seats.
The engine line-up consists of four petrol drivetrains, each with three cylinders and a capacity of 1.0 litre, and SKODA claims their performance “is as eager as it is efficient”.

The MPI engines feature indirect injection and produce outputs of 60 hp and 75 hp respectively, while the two TSI drivetrains are both “packed with advanced engineering, including turbocharging and direct petrol injection” enabling them to generate 95 hp and 110 hp. Both TSI engines are fitted with a petrol particulate filter and the most powerful of the engines can be matched with a seven-speed DSG gearbox as an option.

By concentrating on petrol engines, SKODA says it is “paying careful consideration to the requirements of the target groups in the small car segment”.

By expanding the choice of driver assistance systems, SKODA is transferring advanced technology from higher vehicle classes to the small car segment: the new Blind Spot Detection feature alerts the driver to the presence of vehicles in the blind spot or approaching rapidly from behind (as when driving on multi-lane highways).

The Rear Traffic Alert system monitors what is going on behind the vehicle and warns of a risk of collision when reversing.

Another newly available feature is Light Assist, which automatically switches to low beam as soon as the system detects oncoming traffic or vehicles ahead.

The ‘Swing’ infotainment system now offers a 6.5-inch display and also allows drivers to use the full range of mobile online services from SKODA Connect. When equipped with the ‘Amundsen’ navigation system, the car will also offer an Online Traffic Information service with real-time information on traffic holdups.

Meanwhile, SmartLink+ technology makes it possible to enjoy all the benefits of Apple CarPlay, Android Auto, MirrorLinkTM and SmartGate standards.

A host of ‘Simply Clever’ practical touches are designed to increase comfort and functionality in day-to-day use. The ice scraper concealed in the fuel filler flap now incorporates, as a new function, a gauge for measuring the tyre tread depth.

The car can also be equipped with USB ports for the rear-seat passengers and the side compartment in the boot of the Estate variant features a portable LED flashlight.

The Fabia plays a key role in the Czech carmaker’s current model range. It is an international bestseller in the small car segment, and has also been the basis for SKODA’s most recent successes in the world of rallying.

Since 1999, over four million Fabias have been sold worldwide, with the current third generation model alone accumulating sales in excess of 500,000. As a result, the Fabia is presently ranked third in the brand’s list of best-selling models.

Who’s afraid of a little bicommunality?