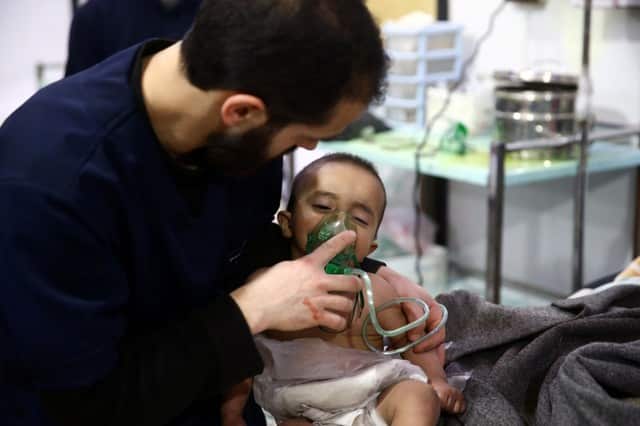 Man with a child are seen in hospital in the besieged town of Douma, Eastern Ghouta, Damascus

US Ambassador to the United Nations Nikki Haley warned on Monday that Washington “remains prepared to act if we must,” if the UN Security Council fails to act on Syria, as the Syrian army’s onslaught in eastern Ghouta continued unabated.

The United States asked the Security Council to demand an immediate 30-day ceasefire in Damascus and rebel-held eastern Ghouta, where Syrian President Bashar al-Assad’s forces, backed by Russia and Iran, say they are targeting “terrorist” groups which are shelling the capital.

The army’s onslaught in eastern Ghouta, backed by air and artillery strikes, has killed about 1,160 people since Feb 18, a war monitoring group said, as Assad seeks to crush the last big rebel stronghold near the capital Damascus.

“It is not the path we prefer, but it is a path we have demonstrated we will take, and we are prepared to take again,” Haley told the 15-member Security Council. “When the international community consistently fails to act, there are times when states are compelled to take their own action.”

The Security Council demanded a 30-day ceasefire across Syria in a unanimously adopted Feb 24 resolution.

Russia and Damascus say a ceasefire ordered by the UN Security Council does not protect the fighters in eastern Ghouta, arguing that they are members of banned terrorist groups.

“There has been no cessation of hostilities,” UN Secretary-General Antonio Guterres said on Monday. “Violence continues in eastern Ghouta and beyond – including in Afrin, parts of Idlib and into Damascus and its suburbs.”

“No sieges have been lifted … To our knowledge, not one critically sick or wounded person has yet been evacuated.

Russia’s UN envoy Vassily Nebenzia also said some states were accusing the Syrian government of carrying our chemical weapons attacks in a bid to “prepare the ground for the unilateral use of force against sovereign Syria.”

“We have heard hints of that in the statements of some delegations today,” Nebenzia said. “Basically steps are being weighed which could hit regional stability very, very hard.”

Elsewhere, Syrian jets also struck rebel-held towns in the country’s south, the first aerial attacks on the area since the United States and Russia brokered a deal making it a “de-escalation zone” last year, rebels and residents said.

“If (reports of the strikes are) true, this would be a clear violation of the (south-west) ceasefire by the Syrian regime that broadens the conflict,” a State Department official said.

“We urge all parties in the south-west de-escalation zone not to take actions that would jeopardise the ceasefire and make future cooperation more difficult.”

The assault on Ghouta is one of the heaviest in the war, which enters its eighth year this week.

Thousands of families are sleeping in the open in the streets of the biggest town in the enclave, where there is no longer any room in packed cellars to shelter from government bombardment, local authorities said.

At least 70 people had been buried in a town park because air strikes made it unsafe to reach the cemetery on the outskirts, it said.

In a video filmed inside Douma, one man cowering in a heavily damaged shelter said: “It is completely uninhabitable. It is not even safe to put chickens in. There is no bathroom, just one toilet, and there are 300 people.”

Douma residents said dozens of people were trapped alive under rubble, with rescuers unable to reach them due to the intensity of the raids.

Government forces have now captured more than half the rebel enclave, entirely besieging Douma and the large town of Harasta, cutting them off from each other and neighbouring areas with advances on Saturday and Sunday.

In an apparent sign of local discontent with the rebel policy of holding out, the Syrian Observatory for Human Rights monitoring group reported that hundreds of people protested in the town of Kafr Batna to demand a deal to end the onslaught.

Jaish al-Islam, one of eastern Ghouta’s main rebel groups, said on Monday it had reached an agreement with the government’s ally Russia to evacuate wounded people, after communicating with Moscow through the United Nations.

A UN humanitarian spokeswoman said the United Nations was not part of that deal and still called for the urgent evacuation of more than 1,000 sick and wounded people in eastern Ghouta.

State television broadcasts from the government-controlled side of the battlefront showed dark grey clouds of smoke billowing from several places across a landscape of shattered buildings.

The Observatory, said on Monday the death toll in the civil war had passed half a million people.

It has confirmed the deaths of 511,000 people, it said, and has the names of more than 350,000 of them. About 85 percent were killed by government forces and their allies, it said.

Eastern Ghouta has been besieged for years after many of its residents joined the initial protests against Assad’s rule in 2011 that triggered the slide into civil war. The United Nations says 400,000 people live in the enclave, already suffering shortages of food and medicine even before the massive assault began in mid-February.

Assad says the assault on eastern Ghouta is needed to end the rule of Islamist insurgents over the civilian population and to stop mortar fire on nearby Damascus.

The United Nations has warned of dire shortages of food and medicine, where international deliveries have long been erratic and often obstructed before they could reach the enclave.

The expulsion of the rebels from eastern Ghouta would represent their biggest defeat since they lost their enclave in Aleppo in December 2016. They still control large areas in the north-west and southwest and a few scattered pockets elsewhere but have been driven from most major population centres.