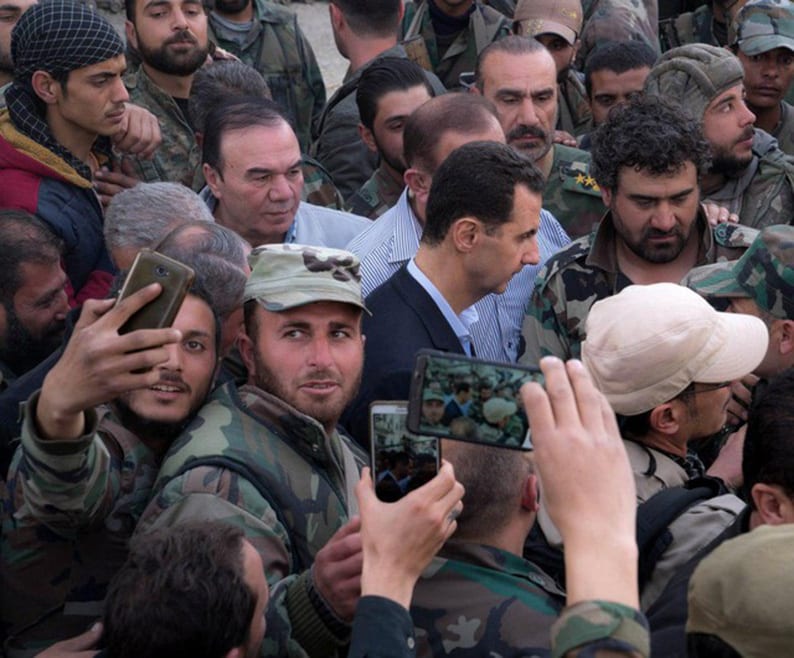 President Bashar al-Assad flaunted government advances inSyria‘s seven-year war by filming himself driving to meet frontline soldiers near Damascus, making a video of the journey from the city centre into areas recently recaptured.

“The road is open… everything is running now in the city and in Syria,” he said in the video, describing a road that had previously been cut by sniper fire and saying it was now easier to travel around the country.

The video, released overnight after a trip on Sunday, showed Assad in sunglasses at the wheel of his Honda car, speaking about the government’s increasing strength as peaceful scenery behind him gave way to battle-scarred concrete.

His visit to the battle front in eastern Ghouta, where state television showed him cheered by soldiers as smoke rose in the distance, came after tens of thousands of civilians began fleeing the opposition area for government lines.

The army offensive began a month ago with a massive bombardment and has so far retaken most of the area, the biggest rebel enclave near Damascus, cutting it into three zones.

It is the latest in a series of military gains for Assad after Russia entered the war on his side in 2015, ending rebel hopes of toppling him by force. Large areas remain outside his grip, but he now controls the main cities of Syria‘s heavily-populated west.

“This is the picture he wants to give… he is in control and finishing off the opposition in eastern Ghouta,” said Nikolaos Van Dam, a former diplomat in Syria and author of two books on the country.

While Assad has increasingly been shown travelling around Syria in recent years, it is unusual for him to visit areas close to the battlefront, as he did on Sunday, meeting cheering soldiers as well as civilians who had escaped the fighting.

There have been numerous other signs of his increasing confidence, including the release last year of a banknote bearing his image for the first time since he became president in 2000.

Wearing a suit without a tie and speaking informally to the in-car camera, Assad gave a running commentary on the areas he was driving through and discussed the military campaign.

He drove into eastern Ghouta from the east – the direction from which the army campaign began a month ago – into the district of Jisreen, which was captured late on Friday.

“When we see that people are returning to the state, it affirms what we are saying: that people want the state, and the state is the mother and father of everybody,” he said as he passed civilians who had left the rebel enclave.

His government and its ally Russia describe the opposition as terrorists and the population in rebel-held areas as human shields for armed groups.

The opposition says residents of eastern Ghouta – an early centre of the uprising against Assad – do not want to return to his rule for fear of persecution, which he denies would happen.

Speaking to the camera as his car passed from fields into a town pocked with shell holes, Assad said Syria‘s long-term challenge would be to “rehabilitate” children brought up under rebel rule.

“This generation has lived five years with dark thoughts, and with elements that resemble the days of the Middle Ages,” he said, saying they needed to be brought back “onto the right path”.

He said their lost education was the price of the war. “It can’t be avoided one way or another,” he said.