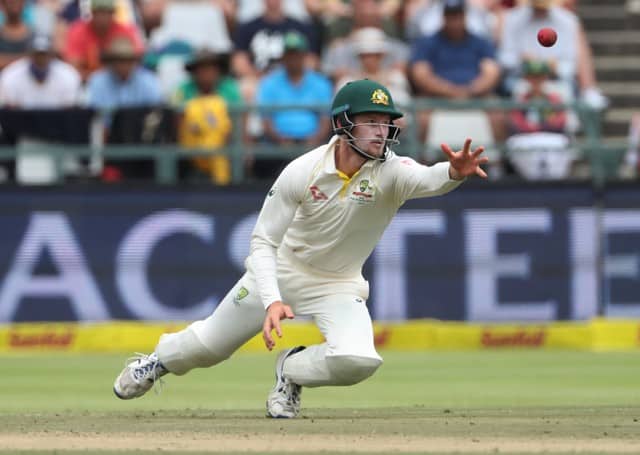 Cameron Bancroft, 25, the most junior member in the side, was the player tasked with implementing the plan

Australia captain Steve Smith says he is embarrassed and takes responsibility for the actions of his side after they were charged with attempting to change the condition of the ball in the third test against South Africa on Saturday, but he will not be stepping down as skipper.

Smith detailed an orchestrated effort from the team’s “leadership group” to use sticky tape to pick up hard granules from the pitch and rub these against the ball to try to alter its condition and get it to swing.

Opening batsman Cameron Bancroft, 25, the most junior member in the side, was the player tasked with implementing the plan and he has been charged by the International Cricket Council (ICC), which could lead to a one-match ban and a 100 percent fine of his match fee.

“I’m embarrassed, the boys in the shed are embarrassed and I feel for Cam as well,” Smith told reporters.

“It is not what we want to see in the game, it’s not what the Australian cricket team is about. Being the leader of the team I am incredibly sorry for trying to bring the game into disrepute like we did today.”

A remorseful Bancroft admitted he was nervous at taking on his role in the scam and panicked when he realised that cameras in the stadium had caught him in the act, placing the tape in his underwear to keep it out of the gaze of the umpires.

“I guess once I was sighted on the (TV) screens, that resulted in me shoving it down my trousers,” Bancroft said. “I am not proud of what has happened. I have to live with the consequences and the damage to my reputation that comes with it. I will do my best to move forward and play cricket.”

Smith said it was the first and last time the team had hatched such a plan and while he would not name the other conspirators, he said head coach Darren Lehmann was not involved.

“The leadership group knew about it, we spoke about it at lunch,” Smith said. “I’m not proud of what has happened. It’s not in the spirit of the game, my integrity and the integrity of the team has been damaged and rightfully so. It’s not on and it won’t happen again, I can promise you.

“The coaches weren’t involved, it was purely the players and the leadership group who came up with this. A poor choice, our actions are deeply regrettable.”

Smith said he wanted to keep captaining the side.

“I won’t be considering stepping down, I still think I am the right person for the job. Today was a big mistake. This is something I am not proud of, something I can learn from and like I said, I am embarrassed to be sitting here talking about this,” he said.

“We are in the middle of such a great series and for something like this to overshadow the great cricket that has been played, that’s not what I am about or what the team is about.”