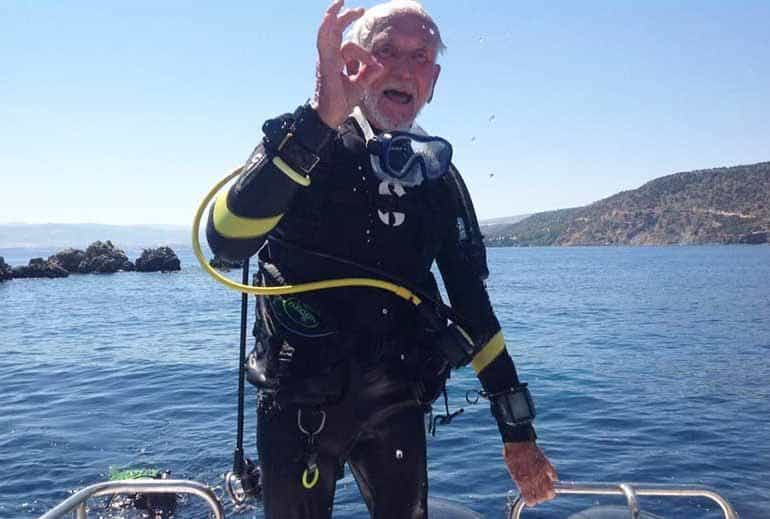 Ray Woolley after completing one of his dives (Dave Turner)

AN inspiring nonagenarian living in Limassol has gained global attention after appearing on TV in both Cyprus and the UK and is now featuring in a documentary film about his life.

Ray Woolley will celebrate his 95th birthday in August and has gained a growing number of admirers from around the globe after claiming the title of the world’s oldest scuba diver last year.

“It’s all come about by being active, that’s how I’ve been noticed. The attention is rather nice at my age; I’m doing something that I enjoy and people see I’m doing something a little different from what’s ‘normal’,” he told the Cyprus Mail on Wednesday.

The documentary, Life Begins at 90, was filmed in Cyprus and highlights Wooley’s life, his passion for diving and the water, and his healthy approach to ageing. It will be shown on various TV channels later this year after competing on the international film festival circuit.

Ray spent his 94th birthday on August 28, 2017 diving to the sunken wreck of the Zenobia ferry in Larnaca, and gained a Guinness World Record as the world’s oldest scuba diver. He dove to a depth of 38.1 metres for 41 minutes.

He also set himself a record to complete 39 dives in his 93rd year – [email protected], but he actually completed 51 dives.

“People say that I’m a legend, but if I can inspire people to say ‘right you’ve done it why can’t I, I’m younger than you maybe, let me have a go’, I will feel like I’ve achieved something.”

Woolley is a World War II veteran who served in the Royal Navy and ‘SBS Special Force 281’ in the Dodecanese. After the war, he trained as radio engineer and whilst working for the British foreign office was posted to Cyprus in 1964.

The 94-year-old is originally from Port Sunlight on the Wirral Peninsula in the UK, and started swimming at his local swimming baths aged five. In Cyprus he dives with the British sub aqua club- BSAC-at RAF Akrotiri and began diving with the Portland and Weymouth British Sub Aqua Club in 1960.

He has vowed to hold onto his Guinness World Record and will again dive to the Zenobia wreck later this year.

“I will get into diving again this month as I had some time off this winter. I get into a routine so I may count dives or I may not, I’m not sure.”

Woolley’s son has also suggested that his father, who swims in his pool four times a day during the warmer months, should try to claim swimming records such as the international short course 50m freestyle and 50m backstroke.

“I might have a go and enter an event where they are officially recording times and jump in and see what happens,” he said.

Wooley is an advocate for healthy ageing and said that exercise is hugely important and that he’s proof of that. Healthy eating is obviously a great benefit, but he added: “don’t deprive yourself, I enjoy a toasted bacon sandwich once a week.”

Woolley also plans to march past the Cenotaph in London on Remembrance Sunday again this year, as he did when he was ninety.

“I will try and keep fit and be active. As long as I’m enjoying diving that’s what matters,” he said.