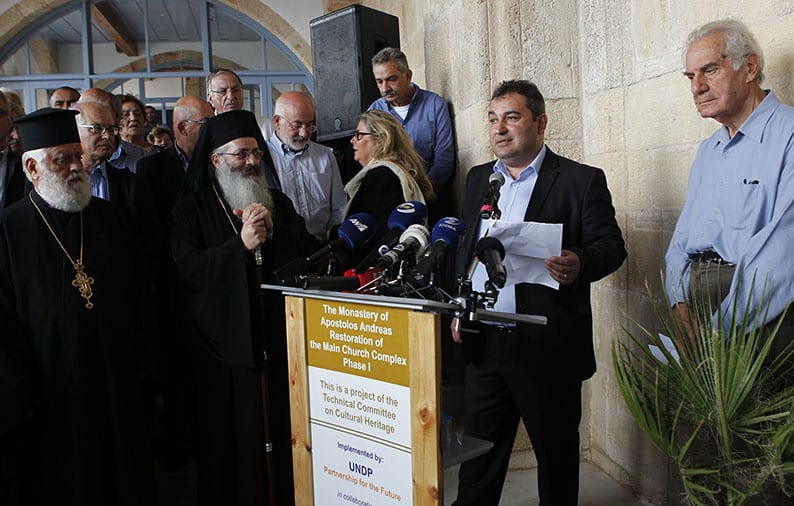 On Monday the two leaders of the largest communities in Cyprus will sit together at a UN-sponsored dinner to discuss how progress can be made towards a solution of the Cyprus Problem. The object of this article is to suggest how the dinner could be used to improve the current frigid political climate and improve prospects for success.

The priority at the moment is not to start the talks, but to improve the perception among Cypriots that it is feasible for a mutually beneficial agreement to be reached, and that the two communities can live together successfully in peace. That means that the immediate emphasis should be on confidence building measures that that will bring the people together and restore their confidence in a solution.

At present this is being done by the Stelios Philanthropic Foundation which has been supporting bi-communal cooperation in business, the arts and research on both parts of the Green Line. With more than 3,000 Greek and Turkish Cypriots and hundreds of organisations on the Stelios Philanthropic Foundation Bi-communal Facebook site there is a significant community on the island that believes Greek and Turkish Cypriots can live and work together. The community leaders should build on this example.

This success is in sharp contrast to the abject failure of the official confidence building measures introduced by the UN and the Greek Cypriot and Turkish Cypriot leaders to achieve bi-communal cooperation.

The only activity that has drawn praise from all sides is the Cultural Heritage Committee under Takis Hadjidemetriou and Ali Tuncay, which has done wonderful work restoring the built heritage of Cyprus for the historical monuments and religious structures of all communities in Cyprus. Nevertheless, there were problems with regard to the actual religious use of the churches and mosques that were restored, and religious worship was hindered by both sides.

On the Turkish Cypriot side the previous administration in the north restricted Greek Cypriot church services, while in the south Turkish citizens from the north were not allowed to cross the green line to worship at the Larnaca Tekke. The new administration in the north, and a more flexible policy in the south, appear to have now improved the situation with respect to religious freedom.

In general, however, confidence building measures have failed. One issue that has upset many people relates to the failure to agree on a system of mobile phone use on the other side. Though the technical issues were resolved, the Greek Cypriot side stated that roaming facilities in the north would be illegal.

In 2011 there were similar problems when the Greek Cypriot side requested that the Turkish Cypriots provide electricity to the south, as a consequence of the explosion near the Mari power station. I was asked by both the Cyprus Chamber of Commerce and the Turkish Cypriot Chamber of Commerce to act as the buyer, and thereby make up for the power shortages in the south. All the officials in the south stated that such a purchase arrangement was illegal. A solution was found because the European Union considers electricity a good, and the exchange of electricity could be considered as covered by the EU Green Line regulations. Cooperation between the two electricity organisations was excellent, again showing that Greek and Turkish Cypriots can cooperate well together. The lesson being that “when there is the will there is a way”.

Some research and imagination is needed to resolve the cross green line telephone problem. Vodaphone operates on both sides of the green line, in the south through a joint company with Cyta a state organisation, and in the north with a Turkish based Vodaphone-owned company called KKTC Telsim. The Vodaphone name was not used because the Cyta/Vodaphone agreement covers the whole Republic of Cyprus including the north. Stating that a roaming service would be illegal is therefore hypocritical of the Cyprus government since Vodaphone operates an illegal phone company in the north, and yet it has a company joint venture with state owned Cyta in the south.

Vodaphone therefore has operations on both sides of the green line that could easily provide the missing roaming services. Payments could also be done directly by shifting funds between the two Vodaphone operations. That would be a welcome measure for everyone who crosses the Green Line.

The other major failure is the delay in the completion and opening of the two planned access roads and through crossings points at Dherinia and Lefka. A solution is easy. They should be completed and opened under the procedures used for all the existing access roads in the past.

The main purpose of Monday’s dinner meeting is to get the UN Cyprus talks back on track. For that to occur, a new special representative of the UN secretary-general is required. He/she should not have a personal timetable, and should act as chairman of meetings, and establish regulations for managing the meetings. Therefore there should be provision for a time-out procedure, so that we do not get the bickering over who left the meeting first in the future and time-out procedures should be introduced when the tempers rise. There should also be deadlines for the response of the parties to specific proposals, which should not be longer than one week. At present they sometimes take three weeks.

Mustafa Akinci has mentioned that a one year time period for talks should be enough for an overall settlement. That sounds reasonable, but the UN secretary-general’s representative would need to be resident in Cyprus (not in Australia or Norway), time schedules developed and intense technical concurrent committee meetings organised. The basis of the talks should continue to be the 2014 joint statement (there is no time for a new basis for an agreement).

If there is no overall agreement in the one year time period, the UN Security Council should decide how to proceed. There should be no provision for arbitration and time schedules should be strictly applied.

In other words let’s get serious about a solution.

Cyprus is heading for stormy weather

Russian roulette against Russia is reckless