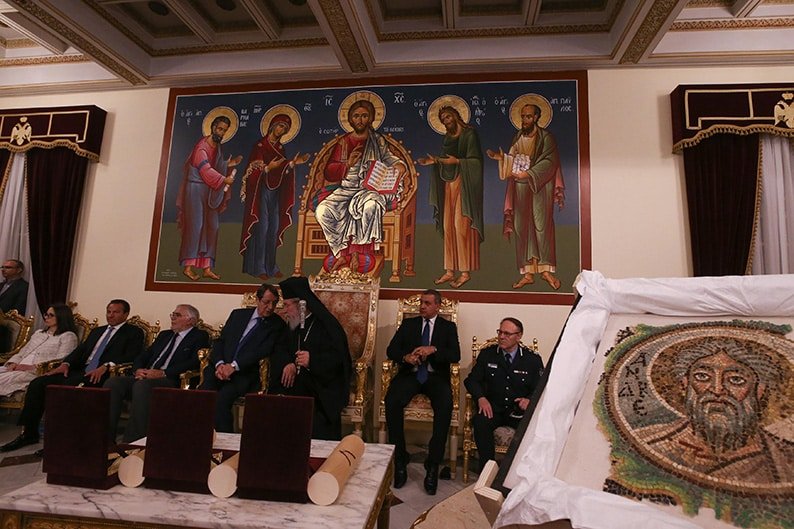 One of the last remaining pieces of the Kanakaria mosaics has been repatriated to Cyprus and was presented at a special ceremony on Monday evening at the Archbishopric in Nicosia.

President Nicos Anastasiades, who was present at the ceremony, said that he had accepted the invitation to attend with “much emotion”.

The return of the mosaic of Apostle Andreas, he said, almost completed the set of the mosaics which had been stolen after the invasion from the Panayia Kanakaria church of Lythrangomi. Most of the artefacts were located and repatriated between 1983 and 2015.

“This moment cannot be anything else than a moment of emotion for the whole of Cypriot Hellenism, but it is also a great national and cultural victory, which justifies and strengthens the joint struggle of the state and the Church to identify and repatriate the stolen treasures of art from occupied Cyprus, and to end the looting of our religious and cultural monuments in the years following the Turkish invasion,” Anastasiades said.

Anastasiades congratulated church and state agencies which had located and repatriated “invaluable treasures, as well as the rescue and restoration of many cultural and religious monuments of occupied Cyprus”.

The remains of the mosaic of the Apostle Andreas, dating from 523-530 AD, was part of a set looted from the Panayia Kanakaria church. The mosaics were stolen after the Turkish invasion in 1974 by well-known Turkish art dealer Aydin Dikmen.

Between 1983 and 2015, most of the mosaics were discovered and repatriated, some after lengthy legal battles, except for two. One of these was the mosaic of Apostle Andreas. It is regarded as one of the most important Byzantine works in existence. It belonged in the apse of the church sanctuary.

The mosaic was found in 2014 by the art historian Maria Paphiti. The last buyer of the mosaic acquired it as part of a larger collection of artworks in 2010. She asked Paphiti to prepare an exhibition for her pieces.

Paphiti told her about the origin of the mosaic and after a long period of negotiations, the owner finally agreed to hand it over to the Church of Cyprus without litigation and for only a symbolic sum.

Dr Andreas Pittas, president of Medochemie and Roys Poyiadjis, a Cypriot businessman, based in New York, covered the cost and restoration.

During the ceremony, the Medal of Apostle Andreas, the highest distinction of the Archbishopric of Cyprus was awarded to Paphiti, Poyiadjis and Pittas for their contribution to the repatriation of the mosaic.

In a statement, Pittas said: “The destruction our country suffered in 1974 and the subsequent thefts of Christian artwork by stripping entire monasteries and churches will characterise Turkey and its prolific thieves in the darkest of colours”.

He said the mosaic in question was one of the highest archaeological value and significance. “The payment for its release and restoration was made by us with the greatest of joy,” he added.

Monday’s ceremony was concluded with a lecture by Professor Robin Cormack, Professor of Art History at the University of London titled ‘Stolen and Found’.