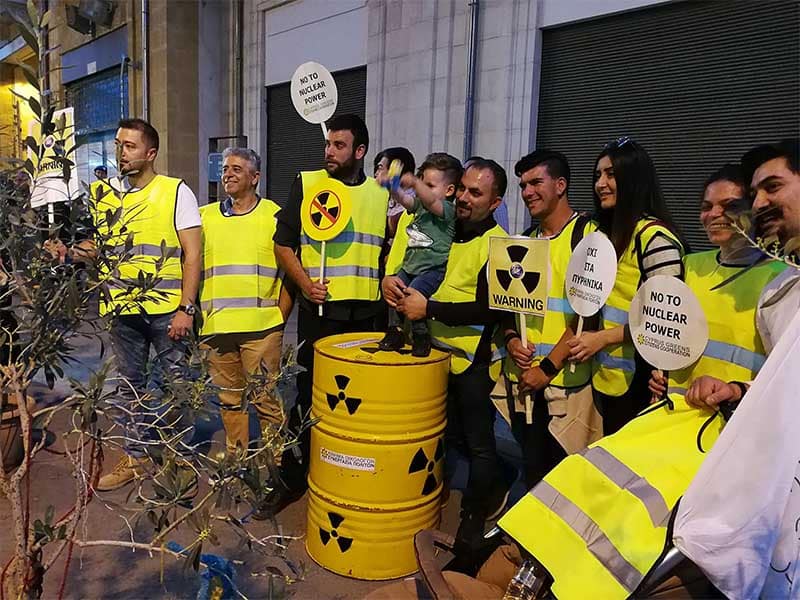 A human chain was formed on Thursday night in a bicommunal demonstration at the Ledra Street checkpoint against the opening of a nuclear power plant in Akkuyu, Turkey.

A joint statement read in Greek and Turkish said nuclear power plants are not only a threat to the environment but affect the health and safety of people of the surrounding areas. A possible leak could pose a huge risk to both workers and residents. “Pollution of the environment (air, soil, subsoil, water) in the unfortunate case of an accident, would affect not only the area itself, since radioactivity travels by affecting large geographic areas”, it said.

Akkuyu is a highly seismic area and radiation from the ‘normal’ operation of the plant as well as any serious leak would gradually destroy the quality of life of nearby living beings, including humans, the statement said. “The eastern Mediterranean basin is a huge and interconnected ecosystem. In the instance of a radiation leak, this will harm hundreds of kilometres around the nuclear plants”.

The Chernobyl accident, which occurred 32 years ago, is still creating problems to people and the environment all around the Black Sea basin, it added.

“Nuclear waste by itself is an environmental disaster that will last for centuries and no one can claim that there is a safe way for its disposal, since the danger of a leak is always there. The cost of the disposal of nuclear waste is very high and this negates the theory that nuclear power is a cheap source of energy”. It also asked if there is anybody who wishes to keep nuclear waste for tens of thousands of years buried on their land.

Τhe power plant is only 90 kilometres off the northern coast of Cyprus.

F1 goes back to Baku, hoping for another thriller